I know many of you are true numbers lovers. Just mention math and your eyes get all dreamy and you sigh with fondness as you drift away on a sea of equations. You know who you are. You weigh your yarn and count your rows and calculate your yardage. You swear by the numbers and smile to yourselves smugly when some other, less-number-oriented knitter makes a whopping huge mistake that could have been easily avoided by a few minutes with a calculator.

I am not one of you.

I am not a math-hater. Not really. I did very well in math in school and took the requisite three calculus courses in college. But I've never much liked math. Never saw the point, to tell you the truth. It all seemed like reinventing the wheel to me. Someone already figured out the answer/did the proof/made a chart, so why should I do it all again? And what's it all good for, anyway? I can't think of a single time in my life when I've actually used calculus outside of a classroom. I mean, I've never once said to myself while driving down the street, "If car A (mine) enters the intersection traveling south at 40 miles per hour, and car B (the other guy) enters the intersection traveling west at 60 miles per hour, at what point will car B impact car A?" I just slam on the brakes and cuss like a sailor.

Still, I recognize that math has a valid place in knitting. I use math, for example, to calculate the number of skeins of yarn I need based on the yardage. I use math to figure out how many stitches to cast on to get a certain number of inches in width. I even use math to check my gauge, although, as we all know, gauge is really just a myth.

But I know the truth about math: math lies. Examples are rampant in blogland. No amount of calculating and planning will guarantee that you will have enough one-of-a-kind, hand-dyed, laceweight silk to finish that gift shawl the night before your mother's 60th birthday. No matter how much math you have done, you will run out. Math cannot save you when you substitute yarn for a raglan sweater knitted in the round and have to calculate row gauge for the raglan decreases. You will end up with a sweater fit for an orangutan. And don't expect math to come to your rescue when you painstakingly measure the diameter of your baby's head to make absolutely sure that pullover will, in fact, pull over. It won't. Why? Because math lies.

I am working on a project using a laceweight yarn held double. I knitted a swatch (even though I doubt that there is anything truly useful to be gained from such an endeavor), measured my gauge, and calculated the yardage I would need for the project. I ordered just that much. I know this is tantamount to waving a red flag in front of the knitting goddess, but it's cashmere/silk, so, you know, I didn't want to raid the kids' college fund. I checked my gauge again when I started knitting, and all was well. I kept an eye on my yarn usage as I worked. And even though the numbers told me things were peachy...I ran out. Not a few rows early. Half a sleeve early.

I considered ripping and reknitting the whole thing with a single strand of laceweight, but even I couldn't stomach the prospect of ripping out that much lace. So I bit the bullet and ordered another skein, which is more than I need to finish. But since I'm holding the yarn doubled, I needed to turn one skein into two balls. After a little consideration, I set up my ball-winder and swift, got out the postal scale, weighed the bobbin for the ball-winder (15 grams), weighed the yarn (50 grams), and determined that, if I wound until the bobbin plus yarn weighed 40 grams, I would have divided the skein in two.

So I did. When I hit 40 grams, I cut the yarn, slid the ball off the winder, and wound the second half of the skein. Then I weighed the two balls. They weighed 25 grams each. In theory, and if math were not the stinking little liar that it is, they should each have had the same yardage, right? This is machine-spun yarn, after all. There should be very little variation in the spinning. Blithely moving ahead with this assumption, I fed the end of each ball into the ball winder and began winding them together to make a single, double-stranded ball. Things were humming along according to plan until, to my surprise and completely without warning, one ball--and only one ball--ran out.

This is what was left: 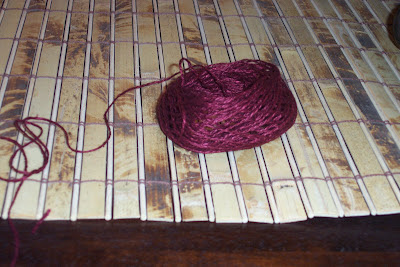 This is not a small amount of yarn. This is many, many yards of laceweight. And when it costs more per gram than, oh, caviar, gold, or enriched uranium, this is a lot of yarn to waste. There is, of course, only one explanation for this, and I will say it again: math lies.
Posted by Yarnhog at 9:20 PM

My mind is boggling.

Don't let this get out to those science hating anti-Darwinians. All they need is precedent. We know what you say is true but I'm thinking maybe only true in knitting so let's just keep it a secret.

Of course math lies. I've known that since 9th grade.

And yes, there is yarn in every moment at Webs. Try going to the employee kitchen which is currently doubling as the receiving area. Instead of a cup of intended tea you leave with two Judy's Colors stocking kits and the new Rowan book.

I agree, math lies. So do those stinking swatches.

Yes, I have been deceived by math on many occasions!!

What the F?! How is that possible? Math is a liar.

As an aside, all day today blogger has been deeming me an Anonymous commenter. This is Yarny Old Kim.

No! It can't be... math is objective and true. It's gotta be your scale. My reality won't allow for any other option.

Yes, I whole-heartedly agree! Math lies AND swatches are evil. In fact, when math and swatches are used together, I suspect their evil powers are multiplied ten-fold!

I had the same thing happen with splitting up the Tofutsies into two balls a few months ago--weighed,carefully wound, weighed some more and then....one ball the size of a grapefruit and the other the size of large egg!

Well, at least I know now it wasn't ALL operator error on my part, as I know your knitting hit powers are way more advanced than mine! :) I think not swatching and sticking to loose, approximate numbers is the best policy! ha!

I have long held this theory about math.

Hell hath no fury .....
like a knitter screwed over by numbers

I should be studying for an algebra final. Instead, I'm reading your blog (and a few others too.)