Last week, my family got to do something really cool: we went for a ride on an aircraft carrier!

As a kid, the KH spent several years as a cadet in the Civil Air Patrol. In fact, he became the highest ranking cadet in his state, and eventually went into Air Force ROTC in college. He didn't go into the Air Force, but he did end up spending seventeen years as an aerospace engineer before becoming a lawyer and embarking on a new career.

Civil Air Patrol was a huge part of his growing up years and he's always wanted to join again when our boys were old enough to do it, too. Older Son turned 12 last year, and sure enough, the two of them joined the local squadron. This means they get to do all sorts of exciting things. They've been on overnight trips, worked the air shows, gone flying several times, witnessed a combat training scenario for soldiers on their way to Iraq and Afghanistan, and tagged along on a C-117 refueling mission out over the Pacific. Usually Younger Son and I are excluded from these activities as non-members (he's too young and I'm too, well, girly), so we stay home. But this time was a family event for the ship's crew, so we got to go, too.

Aside from having to get out of bed at 4:00 AM to make the 5:00 AM check-in, it was really fun. (I don't really remember the first three hours, but I'm told they were fun.) The hangar bay was set up as "steel beach" for a barbeque, and there was a bouncy for the kids and demonstrations of various ship's activities. The ship was open for touring, so we climbed up and down lots of ladders and worked our way through various hallways, poking our heads into placed they had no business being.

The kids had a blast. I think this is the only time they stood still all day: 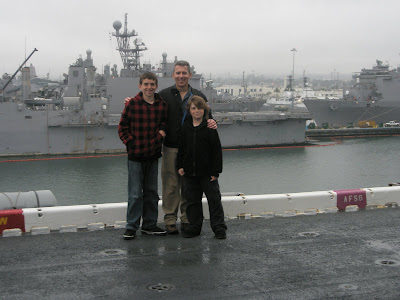 I liked watching the ship's operations, like the way these tugs came to haul us out of the bay: 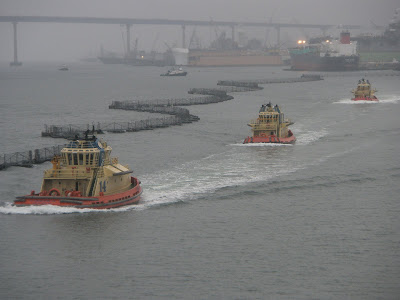 Did you know they still haul the mooring ropes aboard by hand? I didn't. 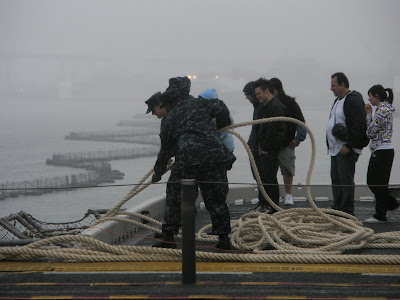 As you can see, I wasn't the only civilian hanging out on deck: 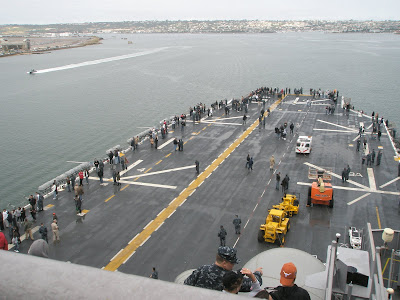 Of course, it is still a military vessel, and we are at war, so there was plenty of security in evidence. This was one of our escorts: 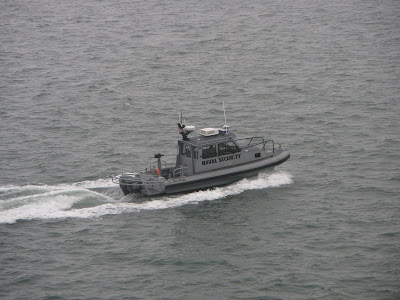 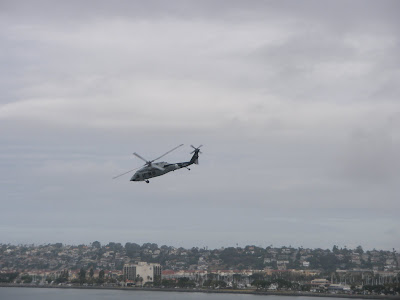 And these guys were stationed on every side of the ship: 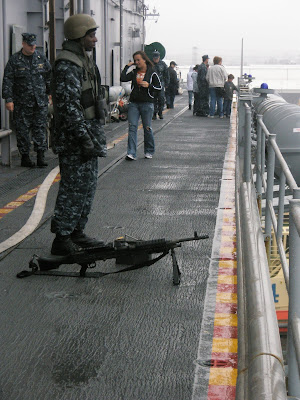 I kinneared this guy because I wasn't sure if I should be taking his picture and I don't like pissing off guys with guns.

And there were a lot of guns around. I was leaning on this convenient armrest... 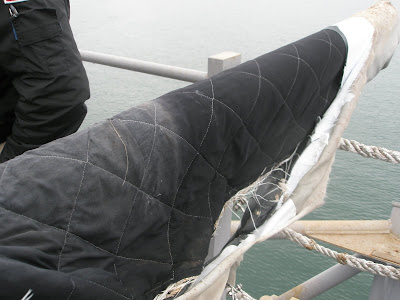 ...when it occurred to me to wonder what it was: 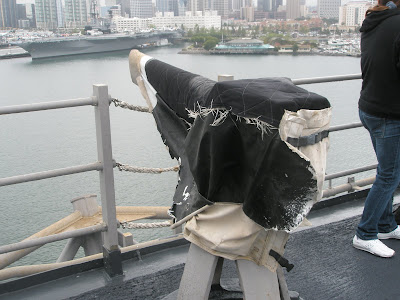 I don't think it's supposed to be an armrest.

We certainly weren't the only ship out there; San Diego is a Navy town: 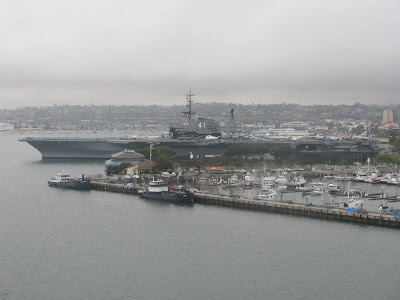 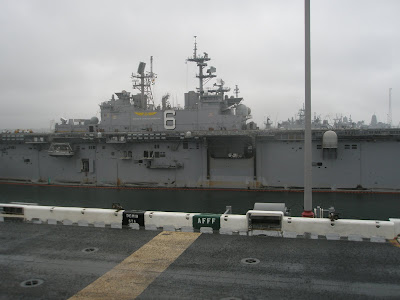 These are Marine Corps helicopters: 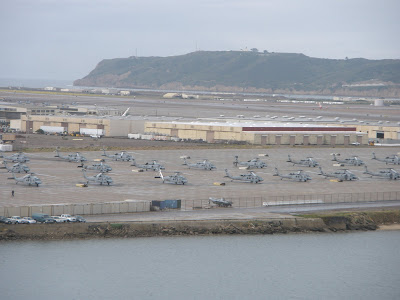 It was pretty cold and foggy first thing in the morning and we got rained on for the first couple of hours. 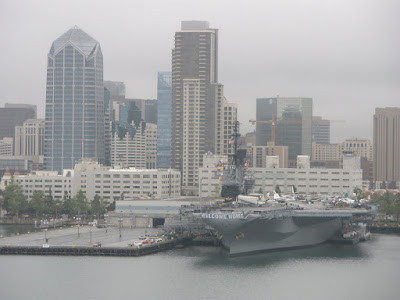 See the sign on the back of that ship? Isn't that a great way to greet sailors on their way back from deployment? That's what they see as they enter the harbor.

Eventually it cleared up and became a beautiful day. 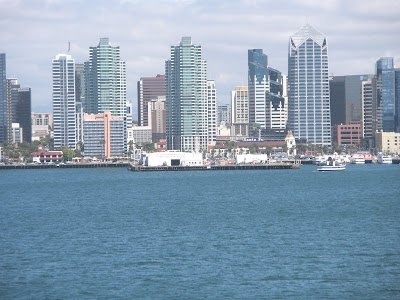 And the pleasure boats came out to play: 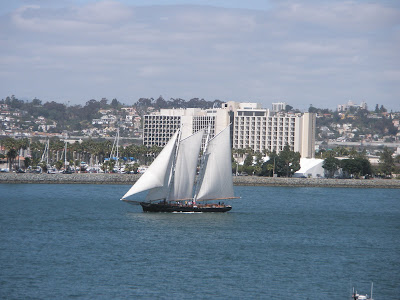 By this time, I'd pretty much had enough of life at sea and settled in to do what I do best: 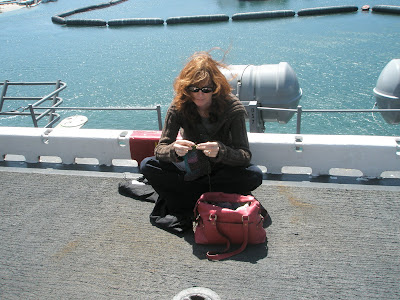 I can't swear this is the only time anyone has ever knitted on the tarmac of the U.S.S. Peleliu, but it's probably a good bet.

The added advantage was that this spot gave me a front row seat when a sudden flurry of activity indicated something interesting was about to happen: 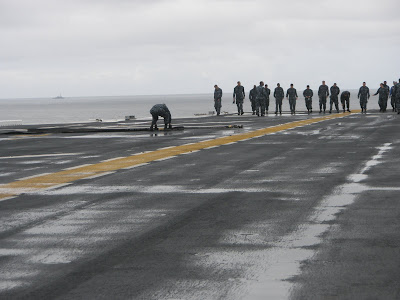 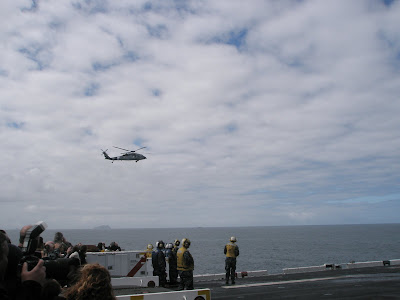 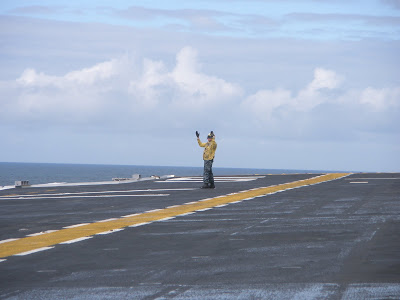 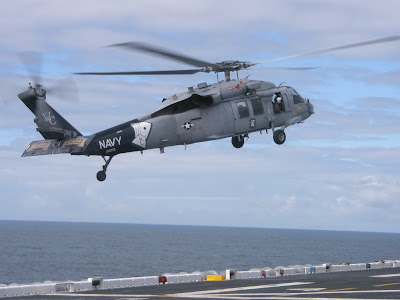 And that is exactly where my camera card announced it was full and I totally missed the actual touch down on the deck.

We were on board for about ten hours altogether, and I think that was enough for me for one lifetime. I can't even imagine what it must be like to live on that ship for months at a time. I was completely exhausted by the time we got home, and it was a full 24 hours before the bed stopped rolling whenever I closed my eyes. And I got to spend the day up on deck. Most of the sailors probably spend their days in some tiny room inside the ship and then return to their tiny quarters to sleep. Honestly, I don't know how they do it. I do know I'm incredibly grateful that they do, so that we don't have to.
Posted by Yarnhog at 8:32 PM

Thank you for those wonderful pics! You know that list going around the knitting blogs of fiber related things you have done, haven't done and want to try? They need to add "knitted on an aircraft carrier" so you can check it off!

PS - I've been watching the HBO mini-series "The Pacific" and that's how I know that Peleliu was an island in the South Pacific where the 1st division Marines fought a very tough battle.

What an amazing day. Love the photo of you knitting on the tarmac :)

Wow! That thing is a monster! My boyfriend would love to do something like that!

My husband spent two ten-month cruises on the U.S.S. Hancock, a WWII-era carrier, during the Vietnam war. Besides working 12-hour shifts, he played a lot of bridge, read Moby Dick (he is NOT a reader), and built a model plane that he flew off the stern.

Since all of that was a l-o-n-g time ago, he would love to go on a one-day carrier cruise.

Great pics! I can't imagine what it must be like to LIVE on a boat for weeks, months at a time. Heck, I'd probably start climbing the walls on a cruise, let alone a Navy ship.

What an interesting day, I love the picture of you knitting on the tarmac! Don't be too sure that it's never been done before though. They did a documentary on Canadian fighter jet pilots training at Cold Lake, AB, I watched every episode and darn if I didn't actually get to meet the only female fighter pilot featured in the documentary, she was top of the class too! Guess where I met her? At my LYS... we're everywhere!

So cool! What a great adventure!