And Then There Were Three

Because life is never so complicated that you can't add a new twist. 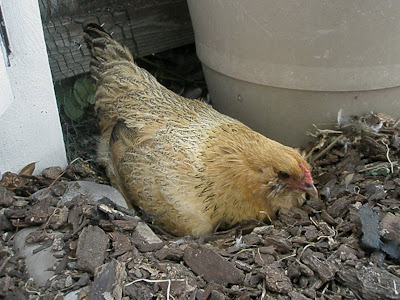 This is Mimi. Mimi came from a local freecycle ad. She used to have a sister, Gigi, but Gigi went to the great chicken coop in the sky and Mimi has been very lonely ever since. Mimi can't bear being alone, so she kept sneaking into her owner's house through the dogs' open door. This did not please her owner and she decided Mimi needed a new home.

I saw the ad and just had to save poor Mimi from her lonely, barren existence--of course. 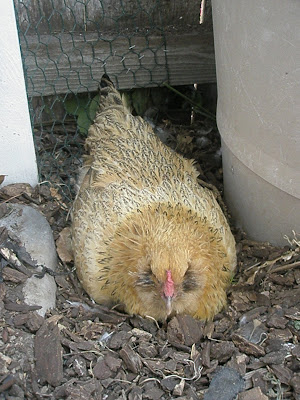 She's an Araucana hen. She's pretty small, and her previous owner says she lays a blue egg every day. She hasn't laid one yet today, but she dug out this little nest for herself, so I think she's getting ready to.

She is a sweet chicken. We had planned to pick her up with her coop, so we didn't take a box for her. Her coop turned out to be a massive--and heavy--plywood structure that we couldn't possibly transport, so she sat in my lap for about an hour while we picked up the kids from my mom's house and drove home. She is totally mellow and seems to love looking out the car window while cuddled down in a warm lap.

She spent last night under an overturned laundry basket in the garage, and this morning we introduced her to our girls. 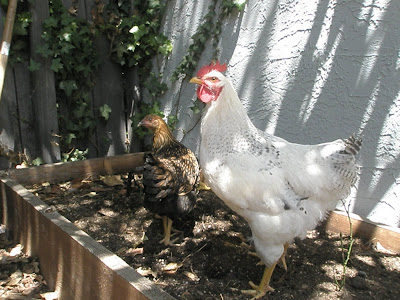 The initial introduction was...tense. Izzy let Mimi wander around for a few minutes before jumping on her and trying to kill her. (You can see in this picture than Izzy lost quite a few tail feathers in the scrap.) After a period of separation, we tried again. This time, Izzy waited a little longer and the battle was much shorter. Mimi did her best to get out of Izzy's way, and Izzy eventually decided Mimi is no threat. Now they're all out in the chicken garden together--Izzy and Maggie at one end, Mimi at the other.

And check this out! 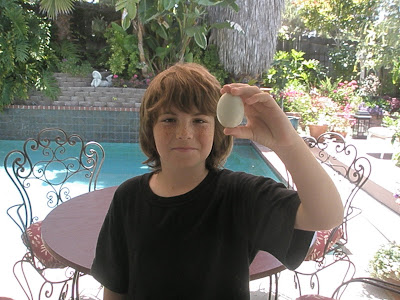 As I was writing this post, Younger Son came in with this, as proud as if he'd laid it himself. Our first egg!

I love chickens. All I ever get from the dogs is poop.
Posted by Yarnhog at 8:54 PM

Love the image you driving around San Diego with a hen cuddled in your lap. Did she purr?

this makes me want to adopt a chicken, especially after discovering dog poop on finished knitting that I thought was out of their reach!

my sister has chickens. they really are nice animals to have--they give you eggs and eat any old veggies and fruit that you didn't get around to eating so you don't feel guilty about waste. she just hatched a new batch in her preschool classroom. i think some of the new ones are the same type as mimi.

Haha! Isn't that about all you get from most of the inhabitants one shares their abode with? (I'm thinking specifically about the diaper pail and the litter box in my house...)

Sweet! Chicken are so fun,and the eggs are delicious! We used to have a few, and then we got some more that hatched , unfortunately they only lasted a few days. Not sure if it was Mr. Fox or Lady Grey the cat that got to them...

Izzy looks like quite the tough. Chicken.
I love my blue eggs! And the birds are wonderful; pretty docile, not flighty.

I've been wondering lately if chickens could be classified as pets in our town...probably not...more's the pity.

Congratulations on the egg!

Eeeee! I love chickens! And congratulations on the new member of your family :)

one of my most favorite lines from your blog, about loving chickens.(hee he)

:)))) Perhaps he did!
Oh those chicks... don't spoil them with too much blog attention! They stop laying eggs...
Mine did and wanted to go to Holly- or Bollywood!

Interesting to learn about their behavior. I enjoy your hen stories.