The day before yesterday I finished my socks, and yesterday I finished my current sweater (bringing the total of finished-but-unblogged sweaters to three). So today, I found myself in the unaccustomed position of having nothing on the needles (excluding those shawls and scarves that I do not consider either wips or ufos--because this works in my world).

I really wanted to cast on another pair of socks. (Shhh...you didn't hear that from me, and I'd just as soon the Knitting Goddess didn't, either.) I wore my new socks to Legoland on Saturday with my new clogs, and despite standing and walking for nine solid hours--it was the Southern California FLL Championships and Younger Son's team was competing--I came home with feet that were neither sore nor swollen. My socks stayed up and my feet stayed warm and it was just generally a lovely experience. So lovely, in fact, that I've decided I need more handknit socks, and I want them badly enough that I am willing to knit them. Unfortunately, I don't have much in the way of sock yarn stash, since I am a devoted non-sock-knitter. I am in the process of rectifying that (anyone have any favorite sock yarns that don't cost $25 a skein?), but while I wait for the postal service, I have no sock yarn to cast on.

So I chose another sweater pattern instead. I've wanted to knit this (Rav link) for a while now. I think it's been near the top of my queue for over a year, but I've never quite gotten around to it. In scrolling through my queue today, I thought, "Hey, that's what I want to knit!" And since I am nothing if not prompt, I immediately began mining the stash for likely candidates. The winner, much to my surprise, was a yarn I believe to be the oldest inhabitant of the stash. I know I bought it back before I even had a stash, so it's at least four years old. Back then I didn't even have a specific place for yarn, since I didn't have any to speak of. Oh, how the times do change! 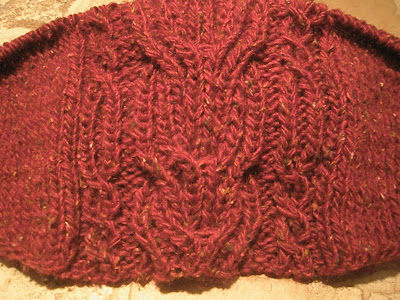 The yarn is Dale of Norway Sisik. I bought it from Herrschners online because it was on sale. I didn't have a project in mind for it and didn't have any idea how much to order, so I just ordered a lot. Really, a lot. When it arrived, I thought, "Hmmm. That's kind of a lot of yarn. I need to find a place to put it." I put it in the guest room closet, and voila! The stash was born.

But alas, poor Sisik--there it remained, month after month, year after year, as the stash grew around it and newer, flashier yarns stole the limelight. There was Lorna's Laces, and Malabrigo, and Noro...they came and visited for a while, but never stayed long. And in time, Sisik was relegated to the back of the stash closet, next to the lime green kitchen cotton and the ill-advised hot pink acrylic.

Until today. Because for some reason, this yarn that never seemed quite right for anything is just perfect for this project. The problem I always had with it is that it is very light, almost airy in weight, but has a heavy tweed texture. It's too light for tweedy sweaters and too tweedy for light sweaters. But holding it doubled, as I am for this project, results in a fabric that is chunky without being heavy. It's surprisingly springy and soft, too. And the color is a rich, dark red with multi-colored tweed bits and a lovely sheen from the mohair content. (My photo does not even come close to doing it justice. Red yarn+indoor light+digital camera=bleah.)

And as an added bonus, the chunky gauge means that a hour of knitting got me six inches up the back, which is a nice change from sock yarn and size 1 needles. This one will probably be done pretty quickly, although I hear there is a dreadful amount of seaming involved. Perhaps that will keep me occupied until the mailman gets here with the sock yarn.
Posted by Yarnhog at 7:13 PM

Opal and Regia sock yarns are quite reasonable -- in the $10-15 range for a pair of socks instead of $25. They aren't soft and yummy merino, but unlike merino they wear like iron. They come in many patterns and colors.

I thought I'd delurk to contribute this...Another place to find inexpensive sock yarn is Knitpicks. They have a few different choices of sock yarn that costs under $10 for enough to do a pair.

I hear you on the reds becoming oranges and indoor photography.

I have used S.R. Kertzer On Your Toes Bamboo for two pairs of socks and I just love them!!! I bought some at Herrschners. No wool, bamboo and nylon. Very soft. Machine washable with no problems. I have never put them in the dryer but the label indicates it is safe.

Webs has sock yarn on closeout a lot. I love Austermann Step, which they have on closeout for $11 a skein. It's so soft and wears wonderfully. I haven't knit socks with them yet (I'm knitting a hat with it), but Cascade Heritage is really nice.

6" in one hour? Wow, I need to get me some heavier weight yarns!
Happy knitting!

Deals on sock yarn? Funny you should ask! I just marked down all Titanium Sock semisolids in my Etsy shop (mymommadethis.etsy.com)! Some nice colors too. :D

chickenlips for socks- she says secretly mwah hah hah-ing on your new world of socks.