I've mentioned in the past my utter frustration with knitting instructions that read: "Work to correspond to left front, reversing all shaping." I mean, really. I'm paying for the damned pattern. Would it kill the designer to write out the directions for the right front? Does it really cost that much more to print an extra paragraph? Am I the only knitter on the planet who finds it confusing to change the ssk's to k2tog's and the "end of rows" to "beginning of rows", all the while keeping track of the number of rows and stitches and making sure to remember the "AND AT THE SAME TIME"'s?

I was planning to show you a Red Ruffles just about ready for its front edgings to be knitted on. I was working the post out in my head while whipping through the seams, considering pithy phrasings, imagining colorful expressions...when two inches from the bottom of the second side seam, something went awry.

I had already finished the right side, and it seamed together perfectly: 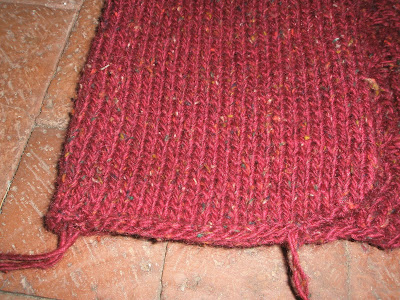 See that straight seam on the left, and the nice little curve on the right? That's how this cardigan is supposed to look. But as I reached the very bottom of the left side seam, the edges didn't match up. This seemed wrong to me, since I was careful about matching the seams, clamping them, and mattress stitching them up, but I figured I'd been distracted by one or more of the other inmates somewhere along the line and cheerfully pulled the seam to do it over.

Some time later, I reached the bottom two inches of the same seam again...and it still didn't match up. Now this time I was less than cheerful. I knew darned well I had matched the seams properly and sewn them accurately, and the other inmates were all in another room watching Spiderman. I pulled the seam partway out again and took another look.

This is the inside back: 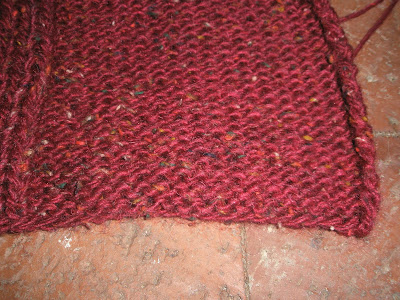 See the straight edge on the right? That's where the side seam should be.

This is the left front: 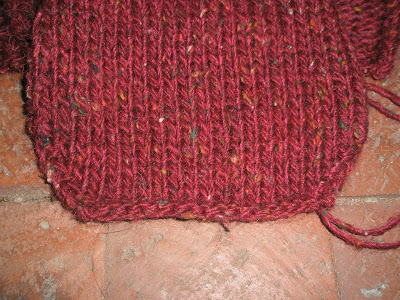 See the nice curve on the left? That's the one that's supposed to be there. That one on the right? Not so much. And this is the result: 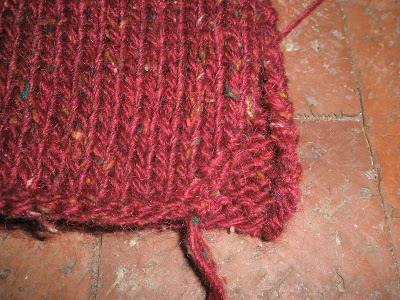 No way that seam is going to be straight. Ain't gonna happen. Because I somehow managed to knit curves into both sides of the bottom of this piece. And as this is a bottom up sweater worked in pieces, the only remedy is to take it apart, rip the entire left front, reknit it, and resew it to the rest of the cardigan.

Now, I would love to blame this little mishap on the instructions. I would love to heap invectives on the head of the designer for failing to write out the directions for both fronts individually. I would love to rant at the magazine editor for allowing such shoddy pattern writing. But the fact of the matter is...the front I screwed up is the one for which the directions are written out. The other one? The one that reads "work to correspond to left front, reversing all shaping"? That one I did perfectly.

Often knitters read blogs for inspiration- I on the other hand look forward to these moments to know what mistakes I have in my future.

But it's just a little thing on the seam. No one will notice. And you can just smile, knowing that you made it submit to your will...

Oh, yes, even the most skillful of knitters (that is you, not I) make mistakes that, in retrospect, seem silly. But there are so darned many ways to screw up a piece of knitting! No wonder we slip up occasionally.

i hate it when that happens. I love it when knitters share their mistakes, though, and 'fess up to the parts they played in those errors. Thanks for giving us (admittedly rueful) smiles this cold December day!

Oh so sorry......I once knit two right fronts to a sweater and didn't notice till I was up to the neck shaping! I ripped it out and it took me six months to get back to knitting it again. Ugh!

Whenever instructions give either "reverse shaping" or "at the same time" shenanigans, I always bust out the graph paper and chart out both sides.

Also, can you just cut off the bottom, pick up stitches and knit down? Do you have enough extra yarn to do that?

Wishing you a really wonderful and Happy New Year!

I am SO on the same page as you. Directions (or lack there-of) like that confuse the be-gee-bers out of me too.

I have been known to walk away from patterns that I "HAVE" to knit because of reverse shaping directions. Knitting shouldn't be so hard and I may be an idiot but I'm a smart idiot and recognize when I'll just be getting myself in hot water. Sometimes. Ok, I keep trying it anyway.

Thanks for the laugh!