Could this possibly be? 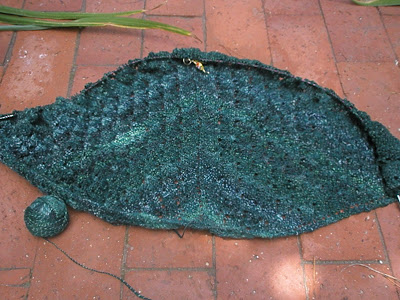 It looks like...successful lace in progress. I don't want to jinx it or anything, but that is what it looks like, isn't it?

I'm on the first of three border charts. The good news is, I can count the number of rows left to go. The bad news is that every other row requires a truly appalling number of p5tog's. I never, ever want to p5tog again. I had to switch from my KnitPicks Harmony needle tips to my Options needle tips for fear I was going to break a wooden needle. It takes me as long to execute a successful p5tog as it does to knit half a row. Never again.

Here's a close up of the yarn: 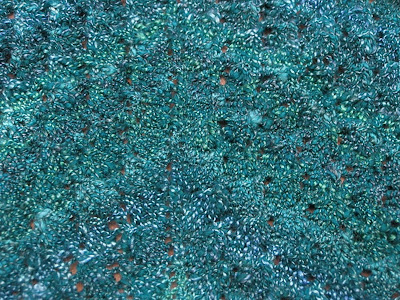 I wish I could get a more accurate picture. This is dark teal, not blue. It's really pretty in real life. It's so pretty, in fact, that I want more.

So I've been spinning this: 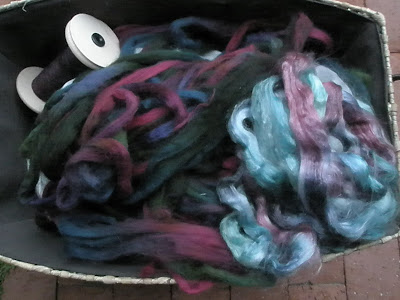 (Again, apologies for the less-than-stellar photo.)

Here's a sample of the merino singles: 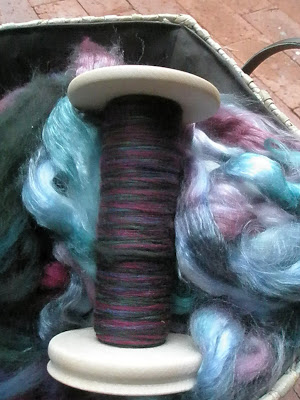 And one of the merino-tencel singles: 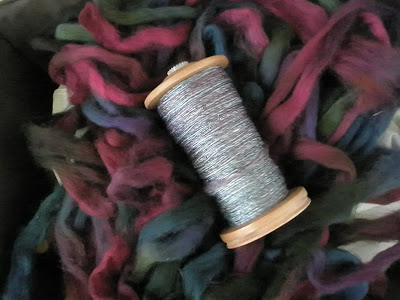 I'm already done with the merino-tencel. It was such a treat to spin that I finished up the entire four ounces in one sitting. The merino is more difficult. I won't order this again; although I love the colors and the yarn from handpaintedyarn.com, their roving is really hard for me to spin. It seems to be semi-felted and is really tough to draft, even with serious pre-drafting. I originally ordered three four-ounce rovings. The first went into the yarn for Swallowtail, I'm spinning this one now, and I have one left. They're all a pain. Not to worry, though; I've already ordered more handpainted merino-tencel rovings from Etsy, so I won't be without lovely spinning fibers for the spring!
Posted by Yarnhog at 12:41 PM

I so hear your pain on the p5tog. I hate those so much! Looks lovely though.

Speaking of spinning... tomorrow at Common Threads the spin group is meeting. Hope to see you!

Whatever the colour is, it looks beautiful.

It absolutely beautiful!!
p5tog. Shoot me!

Lace is not for sissies. Your shawl looks gorgeous! Well done!

Wow, p5tog. My bamboo needles are cringing as I type. :-)

Those yarns are absolutely STERLING! As for "P5tog"....I tend to avoid it; it requires getting down on the floor and holding down the work with my knee - and usually ends with either the police or ambulance at the door. Not pretty, I'll stick with something...a little lighter. (But I do applaud you, it is SO worth the effect!)

Ok, now I know what my next shawl pattern is--thanks! And weirdly I'm not intimidated by p5tog...famous last words:)

Oh I love the colors of all those yarns, spinning ect. Can't wait to see the shawl finished.

I think the two will look great plied together.
I hate trying to spin partially felted fiber too!

P5Tog hurts just thinking about it.

The p5togs are really worth the effort. I did Swalowtail in a teal alpaca, when I blocked it it looked stunning - its a wonderful pattern and the p5s add an extra dimension.