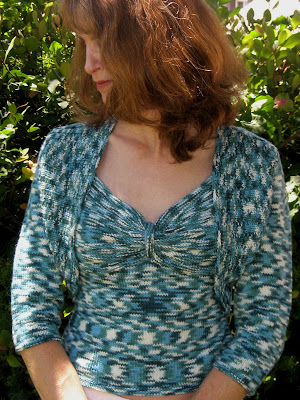 I will confess, I don't love this project.

I didn't like my choice of yarn, though. It is superwash wool, which just doesn't make for a great summery top. I think my love affair with variegated yarns also started to wane with this project. I love variegated yarns. I cannot resist them. But I rarely like the way the look knitted up. This fabric actually reminds me of a tv test pattern. I don't buy variegated yarns anymore, although I do like a nice almost-solid yarn. 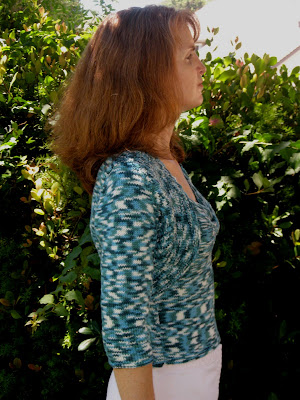 I got the entire thing knitted in short order, but when I began sewing it up, things did not go well. I tried repeatedly to make it work out, and finally, in utter exasperation, called it quits for good. But I didn't rip. I don't much like the yarn anyway, so I stuffed the whole thing in the back of the stash closet, never to see the light of day again. 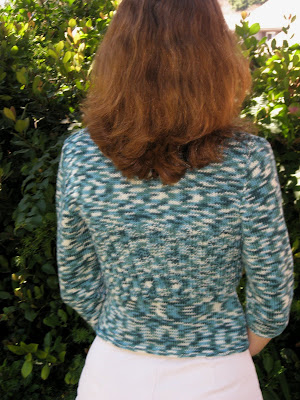 At least until the previously-mentioned post-Dickinson cleanup. I came across it and thought, "Well, it's almost done. It just needs a little sewing up. Maybe a good blocking with fix the odd fit." And so I pulled it out, sewed it up one more time, and blocked the living daylights out of it.

I still don't like it. It is just a poor design. The fronts are made in a way that they simply don't fit properly. Every version I've seen on Ravelry shares the same problem.

Even though I'll probably never wear this set, I don't consider it a failure. I learned quite a bit from knitting it, including short-row bust shaping, the fact that I don't like variegated yarns as much as I thought, and that, sometimes, even professional design are a flop.
Posted by Yarnhog at 4:00 PM

Well, while I like the design, I can say I agree with you on the yarn. It seem a shame that you worked so hard on it and you aren't going to wear it. I hope you find someone for it!

you have been busy, haven't you!

I'm with you on the variegated. Wonder what would happen if you dyed it a solid color? You've done that before, yes?

I like the design but yeah- the yarn was a bust- no pun intended!I'm starting to edge away fron the varigated yarn too.

It does look good though. I too love variegated yarns but have stopped buying them (except for sock yarn and the odd ball for cowls/hats) for the same reasons you stopped buying. You did the best you could with a faulty design. Live & learn.

I don't think it looks bad but I understand what you are saying about variegated yarns. I think they fall into two categories: short and choppy color spots and softer longer transitions.

I don't mind the short choppy color ones for socks, I think they work well since they are smaller projects.

But for bigger pieces, like scarves and sweaters, I prefer the variegated ones with longer sections of color repeats. It doesn't seem as harsh and blends nicer.

I also think variegated yarns eat stitch definition big time. So that's kind of a bummer about them too.

Kudos to you for finishing this up even though it wasn't your favorite!

Maybe you could wear the shrug with a solid shirt/cami and the cami with a solid shrug. Together they are a little too busy for my taste. Congrats on all the FO's.

I feel the same way about variegated yarn. It looks so great in the skein but usually doesn't knit up that great. But your finished twinset doesn't look as bad as you think

you really should wear it. it looks great on you!