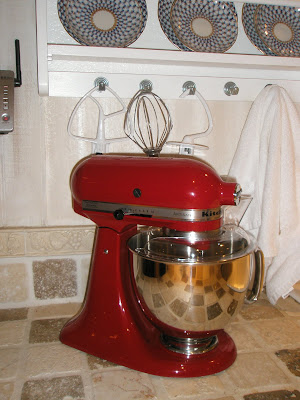 Now, before you all get all upset about my husband giving me a kitchen appliance for my birthday, he didn't. He actually gave me a gorgeous pair of Frye boots I had been drooling over for some time, but didn't buy because they were stupid-crazy expensive. As it turned out, once they arrived and I tried them on, I didn't like them nearly as much, so I sent them back and ordered this instead, with his blessing. (Yes, it's bright red. Is there a theme here?)

I've always wanted a KitchenAid stand mixer. My mom had one while I was growing up (still in use, and it's 35 years old), and I used it for all sorts of things. But I have a very small kitchen and everything in it has to pull its weight and then some. This mixer has to stay on the counter--it weighs a ton and won't fit in a cabinet. So for many years I've made do with a series of cheap hand mixers.

For the most part, it's been okay. But I like to bake sourdough, and the endless kneading is sort of getting to me. So I've been thinking about a stand mixer for a while. The real tipping point, though, is Younger Son and his love of baking. He's always loved to cook and bake. Even as a preschooler, he would always beg to help in the kitchen. I would sit him on the counter and let him pour in ingredients, or put him on a counter stool and let him make eggs or stir soup.

He's 11 now, and quite competent in the kitchen. He has been our grill master for the past few years, and our cookie maker for a while now. Lately, he has been expanding his repertoire dramatically, which is great. Except that he's not really big enough yet to handle some of the heavy duty mixing on his own, and a hand mixer doesn't work for cookie batter or bread dough. Which means, of course, that I hear, "Mom! Can you give me a hand, here?" a lot more often than I really want to. I figured we'd both really appreciate a heavy duty mixer, for many reasons.

I ordered it from Amazon for an excellent price and it arrived Tuesday evening. Younger Son was thrilled. He immediately called dibs and baked banana bread (a little brown--totally my fault; I sent him to shower and failed to pay attention to the oven): 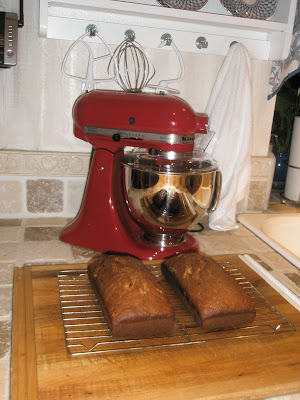 Then he gave me orders to buy ingredients for a pumpkin cake while he was at school the next day. He's been asking for a bundt pan for some time (how many 11-year-old boys know what a bundt pan is?!), so I got him one as a surprise. 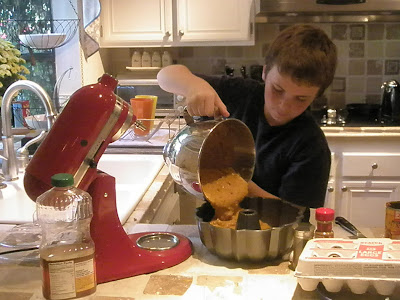 He baked this after school: 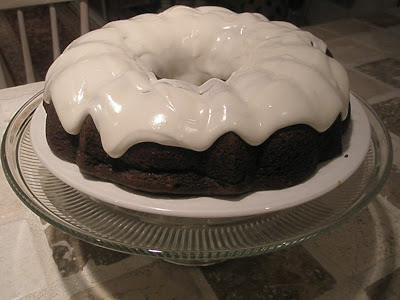 Have I mentioned I'm on Atkins? Low carb? No flour or sugar? Yeah. This is torture.
Posted by Yarnhog at 9:39 AM

I think it's wonderful that your son is so interested in baking. Who knows where it will take him in the future. And the kitchen aide is awesome. If it's going to be so useful it's worth it.

The new mixer is beautiful. I love the red! That's great your son is baking!

Your son is Teh Awesome. He has a bright future adding excess pounds to sweet-aholics everywhere ;-) Want to send him to my house for a few months?

I bought a KitchenAid just like yours (but in boring white) when I was in the nesting phase of my first pregnancy. #1 Son and KitchenAid are still going strong 27 years later.

I think it's fabulous that your son likes to cook. Both of my sons "helped" me bake muffins, cakes, & cookies when they were young - I'm talking 2 yrs. till about 5 yrs. - but only the younger son maintained any interest in cooking as an adult. I do not have the Kitchen Aid mixer you have, but I have had several Kitchen Aid products over the years. I LOVE them!

I have one of these, its yellow and I just adore it. My daughter has also turned into a proficient baker and it is a great feeling to see her using it.

My mom gave me her never used KitchenAid mixer, and I need to figure out how to use it! I've always wanted one, and now that I have it, I'm a bit intimidated by it.

Love that your son is a whiz in the kitchen. My 18 yo son likes to cook, and brews his own ginger beer (only mildly alcoholic; think of it as really nice ginger ale). So much fun.

I love the reflection of your tile counter in the first picture...

So fun to see your son cooking. I told my kids they would always have friends if they could learn how to cook well. Beautiful cake, and I'll bet it was yummy.

I didn't think I needed a stand mixer either until my hubby got me one for Christmas a few years ago. Now I love it and use it frequently! Happy belated birthday!