I love to learn new stuff. Yesterday, I decided to learn to make jam. I know lots of you are old hands at this sort of thing, but I'm a city girl and, except for the astonishing peach harvest of 1976 that forced my mother to make enough jam for the entire Pacific Coast, I don't have any experience with canning and such. This decision was precipitated by my loquat tree's first harvest ripening faster than we can eat them. As I mentioned before, loquats don't keep. Not at all. Not even overnight. And some of them were starting to rot on the tree. After several years of waiting for this tree to produce fruit, that seemed like quite a shame.

I found a number of different recipes for loquat jam online and blended what I liked from each one to come up with my own recipe. I'll share it with you; it can easily be adapted for any kind of fruit. It turns out making jam is really easy! 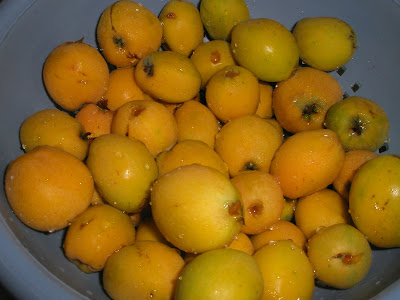 1. Start with your fruit. I started with a bowl of loquats which netted me about four cups of fruit. 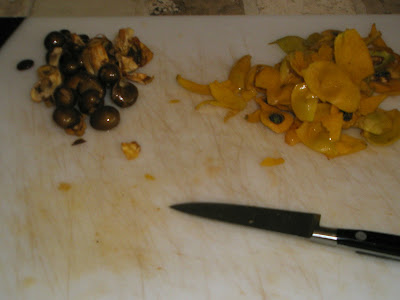 2. Peel your fruit, if desired, and remove seeds, if any. For loquats, about 15 fruits equals 1 cup peeled and chopped. This is by far the hardest and most tedious part. 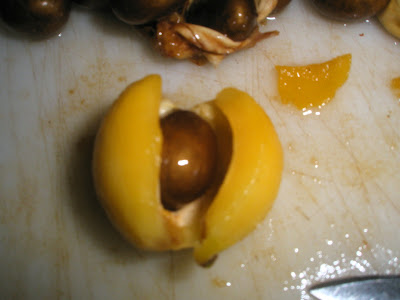 There is probably an easier way to do this, but I couldn't come up with one. I cut the fruit in half, pulled out the seeds, peeled off the skins, then broke the fruit into pieces and tossed them in a pot. 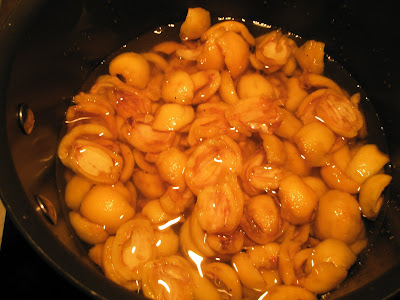 4. Put the chopped fruit in a pot and barely cover it with water. Maybe don't even barely cover it. I put in way too much water and it took forever to cook down. Cook over medium heat, stirring occasionally, until it looks about right. Okay, that may be too vague. You want to cook it until the fruit is soft and sweet and you have mostly fruit without much water. It's not rocket science. You just don't want it to be too runny for jam. 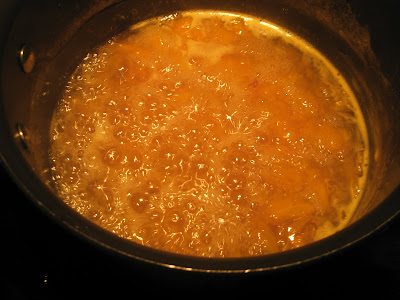 5. Stir in a packet of pectin, if you want to. As far as I can tell, the purpose of the pectin is to thicken the jam as it cools. If you don't care if your jam is a little runny, you don't have to use it. You can also just cook the fruit down until it's the texture you want for jam and skip the pectin. Once you decide about the pectin, stir in your sugar. I used two cups of sugar to four cups of fruit. Most of the recipes I read had at least one cup of sugar per cup of fruit. This seemed crazy sweet to me, so I cut the sugar in half, stirred it in, and tasted it. It was perfect. So just add sugar to taste.

6. While your jam is cooking down, you need to sterilize your jars. I picked up basic mason jars at the grocery store for less than a dollar a piece. You can sterilize them by running them through the dishwasher, or stick them in a pot and boil them for a while. If you do, make sure you get the water to a rolling boil and leave them in for several minutes. We don't want any botulism! I also boiled the spoon I used for stirring and the tongs I used for removing the jars. Leave the jars in the water (or dishwasher) until you're ready to fill them. 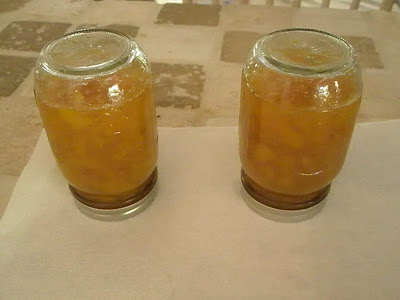 8. Once the jam looks and tastes the way you want it to, spoon the hot jam into the sterilized jars. Don't fill them all the way to the top. Put the lids on tightly and turn them upside down on a towel. Let them stay like that for a couple of hours, then turn them over and leave them alone until they're cool. As they cool, the lids will pull in and create a vacuum seal. If a jar does not seal properly, put it in the refrigerator and use it first. The others can go on a shelf and should last a good six months. Of course, once you open a jar, you'll want to store it in the fridge.

That's it! It's really easy and fun. Oh, and the loquat jam? Delicious!
Posted by Yarnhog at 1:00 PM

Interesting - the Hubs wants to make jam. He's all kinds of domestic in the kitchen - not me....Never had a loquot...have to come out there I guess...

My mom makes jam every year, and has since I was a kid. My favourtie time to visit is when she's making strawberry jam, I love how it makes the house smell.

You have loquats?!?!? I may have to move to San Diego. (Plus my favorite jewelry store coffee shop is in La Jolla.) Ah, loquats.

I'm so jealous! I'm a complete jam whore and can't get enough of the stuff.

I made peach and spiced peach jam awhile ago - wanna trade? hah!

I like to use the spiced peach jam (and any jam that's a bit runny) on pancakes.

Sounds yummy. I used to make raspberry jam in the summer, and even though it was really runny (no pectin) it tasted very good.

I don't know what a loquat is, but it looks delicious.

I make plum jam every fall (so many friends who have an overabundance of plums). I seed the same way you do, but don't bother to peel the skins. I chop the plums a bit in the food processor. The skins add to the texture and look pretty in there.

Not heard the tip about turning them upside down before. Will try that.

If you don't want to do the peeling and stoning you can make jelly instead. Stew the whole fruit (no sugar) until very mushy. You then put the fruit into a jelly bag or big muslin square and suspend it over a bowl or pan overnight. If you want clear jelly you don't squeeze the bag but I always want every drop so I squeeze as much out as I can.

You then measure the juice and add the appropriate amount of sugar and make it as per the jam. We don't have Loquats in
England so I'm not sure what their pectin level is so you might have to add it. The adition of the juice of a lemon is also supposed to help.

Loquat jam sounds tasty..never had it before.

Canning Advice: It is advised to NOT turn jars upside down after processing. It can impede proper sealing as the sealing processes vacuums the rest of the air out of the jar, which can't happen if turned over. ~ksp

I think I can smell it. Yumm.

Yum! We had a loquat tree at the last place we lived. Interesting fruit....

John would love it on his toast!