Earlier this year, I wrote about the decision my husband and I made to declare 2009 "The Year of Small Victories". I even had a contest inviting people to share their small victories with the rest of us. I, for one, found all the appreciation of small things uplifting and inspiring. And all this year, we've done a good job of recognizing those small victories and enjoying the simple pleasures of life at a time when there is so much distressing news every day.

In the spirit of sharing the joy, I want to share with you my greatest small victory of the year: 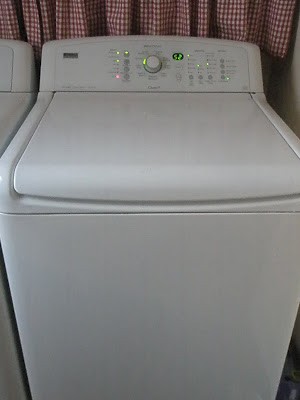 It's a working washing machine! It's not a new washing machine--and that is the small victory. I did not have to replace my expensive and unreliable three year old washing machine with an even more expensive and less reliable new washing machine. There's a long and painful story behind this washing machine, which is my third in only five years. The washer it replaced was only two years old, and died the day before we were leaving for Paris, with 11 loads waiting to be washed prior to the trip. I spent over $900 on this one, and it died immediately after the one year warranty expired. I paid almost $500 to have it repaired two years ago. So when it broke down again last week, I tentatively decided to replace it with a new one--until I went online to research new washers.

In case you're considering buying a washer, here's what I learned:

1. Forget the old style top loaders completely. Two years ago, the US government mandated that manufacturers cut energy usage of these models by 20%. The result is that, according to Consumer Reports, none of these washers are now capable of actually cleaning laundry. If you want your laundry clean, you need to pick another style.

2. Forget the unconventional top loaders, such as the Whirlpool Calypso and the Kenmore Elite Oasis (which is what I have). While they do a decent job of cleaning clothes and are reasonably energy efficient, they have a terrible reliability record. (If you don't believe me, Google "Kenmore Elite Oasis". The invective against these machines will scorch your screen.)

3. If you want clean clothes and a washer that works more often than it doesn't, your best bet is a front loader. But be prepared to fork over at least $900. And don't expect that amount of money will get you a good machine, either. Even the machines that are rated "Best Buys" by Consumer Reports only score 2 or 3 stars (out of a possible 5) when rated by consumers. The biggest complaints are "my clothes don't get clean" and "it keeps breaking down," followed by "it smells horrible!" and "it sounds like a jet engine."

Put in that way, it wasn't such a difficult decision after all.

The repair guy came today (as scheduled, on time, and with a courtesy phone call in advance). He knew exactly what was wrong with it and had the necessary parts on his truck. And he did the repair for only $154--which, if you've ever had a modern appliance of any sort break down, you already know is barely short of miraculous. I was fully expecting that it would either a) be irreparable, or b) be reparable, but only if I were willing to sell a kidney or a child to finance the repair. (Actually, I might be willing to give away a child or two after the past week of "togetherness", but I suspect that just my crankiness--exacerbated by a week's worth of dirty laundry--rearing its tired head.)

I was darned pleased when the repair guy gave me the quote, and even more pleased when it turned out not to need a new pump (something he said it might). But I think the crowning touch was that the problem turned out to be totally and completely not my fault. The bad sound the washer was making, followed within days by its complete and utter failure, was the result of a pair of brass collar stays making their way down into the pump and jamming it. I do not wear collar stays. I am not responsible for removing collar stays from the shirts of those who do wear them. I have, in fact, no relationship whatsoever with collar stays. Ergo, the broken washer and the subsequent repair bill were not my fault. And this is its own small victory. [By the way, the repair guy told me that the most common cause of pump failure is the underwires from underwire bras working their way out of the bra and into the pump. He recommended always using a laundry bag for washing bras in the machine. A word to the wise.]

I hate when our machines go down and it's happened a few times over the past 3 years. My mom's machine is 26 years old (with almost daily use!) and works great so I go over there in between our broken-down-money-guzzling repairs.
Good to hear you had a victory in the washer department!!

We replaced our front loader washer with a top loader a couple years ago and it was the best thing we ever did.

We had a horrible mold problem with the front loader that we could not get rid of (we tried every cleaner on the market and even did little voodoo dances around it and nothing worked). I had chronic sinus infections while we had it, didn't figure out that was what was causing it until we got rid of it.

The top loader has none of these issues and we think it does a better job at cleaning. So they are still good machines.

Plus they work much better for felting knitting and crocheting. ;-)

Even more justification, if I needed any, to not wear underwire bras. [I can't. Believe me I've tried.] My current victory is finding a prompt, cheerful outfit to haul off the leaves from our 47 very large trees, for a very small price. I practically hugged them.

We like our Maytag Neptunes. In fact, we liked ours so much that we told other people and now pretty much everyone we know now sports matched sets at their houses.

Add Maytag to the list of unreliables. I had a 25-year-old top-load Maytag whose only fault was being too small. I spent the money for a new Maytag that was supposed to be the cat's meow, thinking it would have the same quality and reliability. wrong. Two repairs in the first 5 years and still not right.

In my experience, washers only break down after long camping trips or before a vacation.

I am so glad it wasn't your fault! That is the best news.

i wish i could give you an award for most informative post...wow, we just took in all of the hype and assumed that the new washers were the best. we have an old washer and dryer that works fine, but i'd love something larger that would wash my bedspreads.

woah, i'm gonna do my research before forking out $$$ on any new washer.