I'm pretty sure I've used this post title before, but sometimes it just applies.

I ordered some sock yarn online. I don't really have an LYS. I have a not-so-L YS, but I only go there once a month for my spinning group (it's more than an hour drive round trip), so when I get impatient, I order online. No driving, less waiting. The only problem is, since the gratification is not instant, I tend to...um...keep ordering until stuff starts arriving. I'm not sure exactly how much sock yarn is on its way, and I won't know until the postman stops knocking, but the first of it arrived today.

Here's where things start getting interesting. When I first started ordering yarn online, I was often shocked at how...dissimilar the yarn looked in person from how it looked on my computer. I have yarns in the stash that no one in their right mind would buy in person, but they looked pretty darned good on my computer screen. As I've become more experienced at online ordering, I've learned to read the descriptions carefully and check photos of the yarn I'm interested in on multiple sites to get the best idea of how it really looks. I'm rarely surprised or disappointed anymore. Sometimes, though, I still open a box and think, "WTF?"

This is the yarn I ordered: 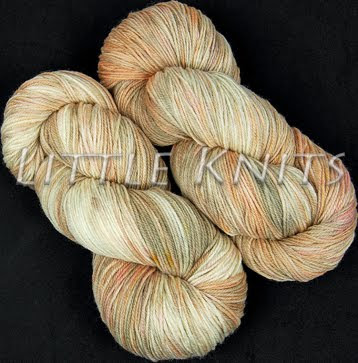 Pretty, huh? It is described as: "A Subtle Combination of Creme, Beiges, Dustings of Cinnamon & Rose Hues". I think that's a fairly accurate description of this picture, and I like it. I like the golden tones and the green and beige and just generally the whole thing. You know what I don't like, though? 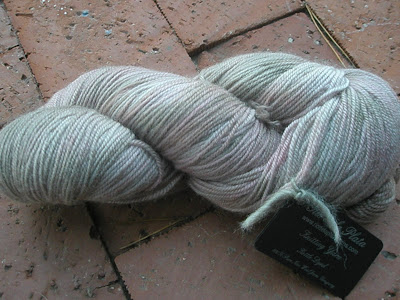 This is the yarn that showed up in my mailbox, and yes, the colors look accurate on my screen. I would describe it as "A nasty combination of greyish mauve with a dusting of puke green." No resemblance at all to the picture or the description of the colorway I ordered. And before you ask, yes, I did check the tag and the colorway is the one I ordered.

So I won't be casting on any socks today. I will, however, be breaking out the dyepot for some creative overdyeing. Stay tuned for the results!
Posted by Yarnhog at 3:46 PM

Hmm...perhaps some jewel tones for the overdye?

Wow! that sucks, the colour you ordered was so pretty.

oh no, you were zapped again! I know you can overdye that into something beautiful.

Screw overdyeing, I would return it. There are so many beautiful sock yarns out there. May I suggest Blue Moon Fiber Arts? I am a member of the Rockin Sock club and have never been disappointed. It is my favorite sock yarn because of the colorways and the tight twist of the yarn. I have some that I made two years ago that show hardly any signs of wear (and I do wear my handknit socks). My second favorite is Mountain Colors Bearfoot. I think you would really like some of their colorways and it has also held up to wear pretty well. Do NOT keep around ugly sock yarn! Send it away quickly before it taints the rest of the stash!

Little Knits has exchanged yarn for me before when the color was way off.

I'm with Khalila, I would send it back. That is so obviously misrepresented its not even funny. Looks like you were sent yarn that wasn't dyed well. I'd get my money back.

to be honest, i would send it back. can you do that? so sorry for your disappointment. i'm also a little sorry you're jumping into socks as now i might be the only one holding out on sock knitting. hmmm.... the pressure's one!

Beware the photos on Little Knits. They will get you every time.