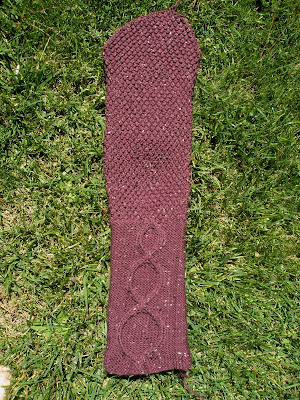 This is the first sleeve of Calluna. The pattern called for a simple, moss stitch, 3/4 length sleeve. I made mine full length, with a slightly bell-shaped cuff, and incorporated the cable from the peplum. 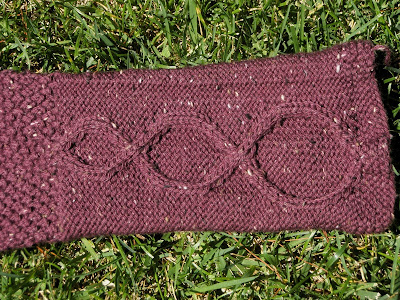 This is the sum total of my knitting for the past two weeks. I have been occupied with other things, and I'm sure many of you have come to hear about that.

So, the puppy update: Heidi and the puppies are doing great! 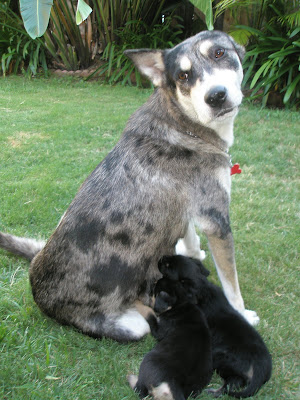 Heidi has put on a lot of weight and looks much healthier. She's had a bath, and we're letting her in the house. She gets along perfectly with our dogs and kids, but it's obvious she's never lived inside. She is a smart dog and a fast learner, and very eager to please. We are working on getting her used to being inside to ease the transition to her new home, wherever that might be. 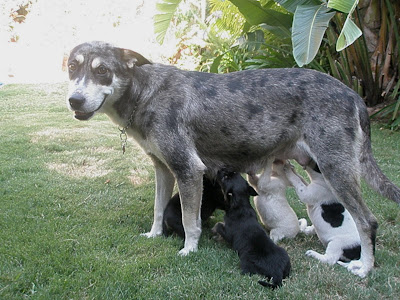 She's still nursing the puppies, as you can see, but she's getting tired of it. We're feeding them mushy puppy food four times a day now, and they're getting big! 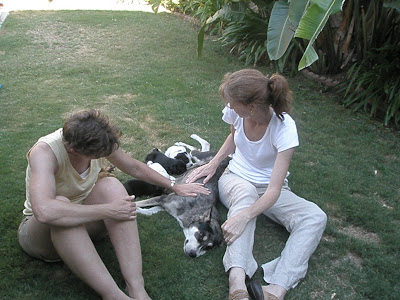 Each puppy has developed its own personality, and they all look different and are all different sizes. Much as I'd love to know what the father was, it's exciting watching them turn into mystery dogs. 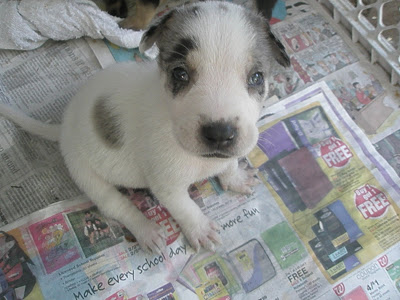 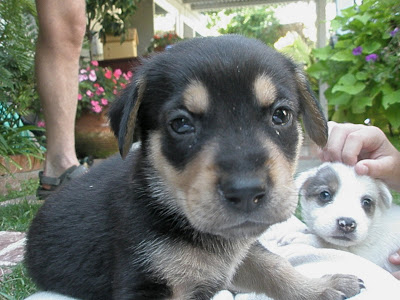 They all love to wrestle and play, both with each other and with toys. 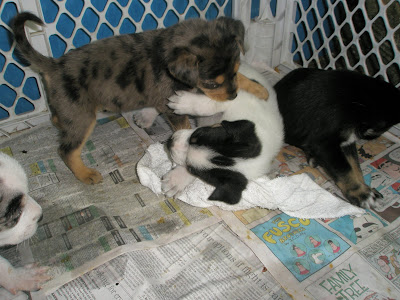 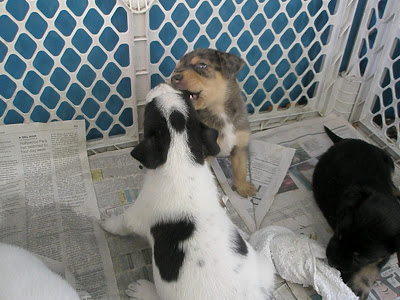 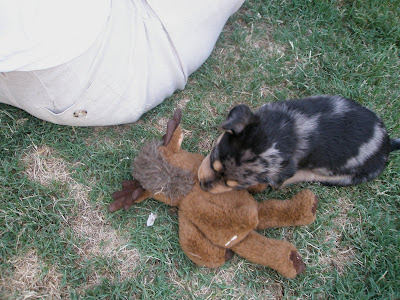 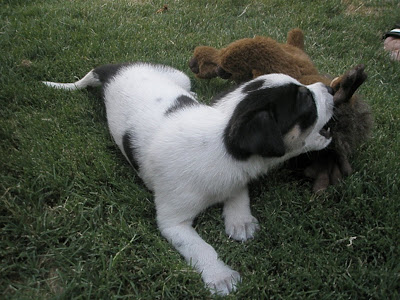 They're such fun to watch!

Like all babies, they only have two states of being: wide awake and sound asleep, with no transition between the two. 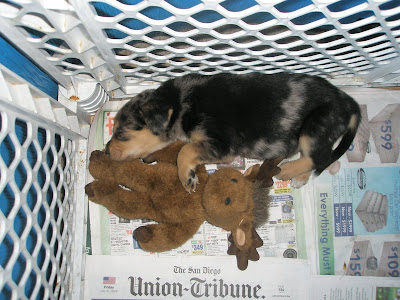 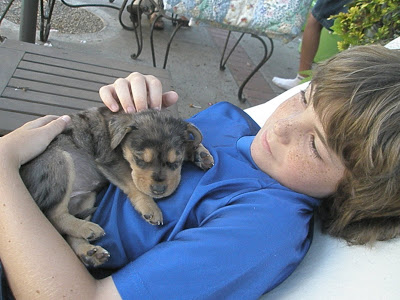 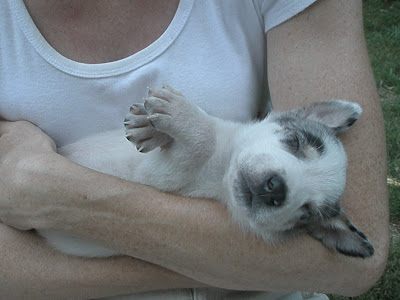 Who could resist that face?

I read your last post and after reading this one, I'm compelled to just say.....thank God for people like you, who will open up their homes and hearts for animals with no questions asked.
Look at the sweet babies!!! I'm so happy you saved them and their Mommy. :)

Ahhh, look at those perfect puppy bellies. They all look soooo much better. It is a joy to see these pictures.

The last picture made me melt! THe puppies are so cuuuute. I hope all the dogs go to a good home with good people. :-)

Look at those paws in that last photo!They are so cute, and they seem so healthy! Adorable!!!

(your knitting looks good too, but I can understand why you hardly have any time to knit these days;-D)

Looking at those faces and colours, it looks like papa might have been a rotty or some sort of terrier. What ever he was he (and she) made some super cute puppies!

Totally came for the puppy post- have to remember to go back and look at the knitting. Oy, they are cute.

You ARE sending that last picture to cuteoverload.com, aren't you?

Aw! Aw! I keep checking your blog to see how that mama & those puppies are; wonderful! What joy.

Oh my goodness they are adorable!!!

You're busy!
Puppies look happy and healthy, so does momma. Isn't it fun when their personalities kick in? :)

Heidi is a perfectly lovely name for a momma dog. :)

They are so cute. And I'm not even a dog person. I'm shocked at this entire story. Seriously.

You have such a generous heart. I hope everything works out wonderfully for the doggies.

Those are still Dooley's two switches: bouncing around the house flinging a toy or snoring on the sofa. I'd like to have his life for a couple of weeks...

The knitting and the puppies both look great! :)

I love that last picture, such sweetness! Your sweater is awesome as usual, love it!

Momma Dog has the expression in the first photo: "Can't YOU nurse these guys for a while? I need a break!" They are all so adorable.

OK, I was doing all right until that last one. And now I'm just melted goo all over my keyboard.

I'm so glad they came to you.

Wow... I can't believe how healthy those pups (and their mom) are now! You're a great nurse.

Ooooooo! couldn't wait to hear about the puppies again. They are adorable. I swear, in the second picture of mom, she looks like she's smiling.

They are SO cute!!

OOOOOOOOOOOOOOOOHHHHHHHHHHH they are SO CUTE!! Heidi looks like she may have some Australian Cattle Dog in her, or Cattahoula Leopard Dog (sp?)...and I'm betting either she or daddy has some Rotty, too. What adorable pups! *slurp* Drooling over all the cuteness here...

OMG, those puppies are so adorable! You are a saint. :)

Your sweater in progress looks so nice that I bought the Calluna cardigan pattern today. I have some Cascade 220 orange heather that's burning a hole in my stash!

I adore the puppy and dog photos. More, please!

The sleeve is beautiful. You do such lovely work. :)

Heidi and the babies look wonderful... you've done an awesome job with them. :)

WOW, you've certainly got your hands full!! They are adorable and if there weren't so many miles (and a border) between us, I'd be down there, ready to take home the cute white/grey one. What a beautiful litter of pups!