The puppies have been with us four weeks today. That means they are now six weeks old! We can hardly believe they've already been here four weeks--until we look at the "before" pictures.

This is how they looked the morning after we picked them up: 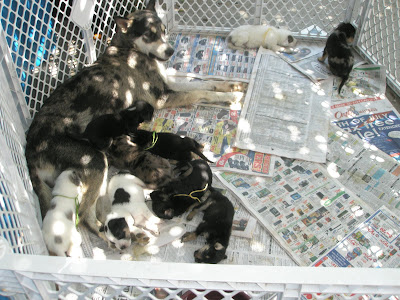 This is the poor little girl who died just hours after this picture was taken: 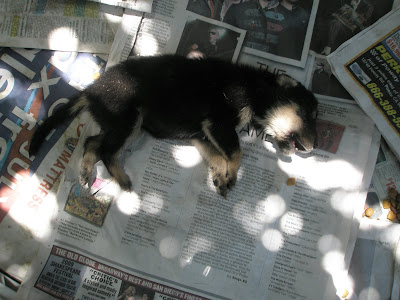 And here they are today: 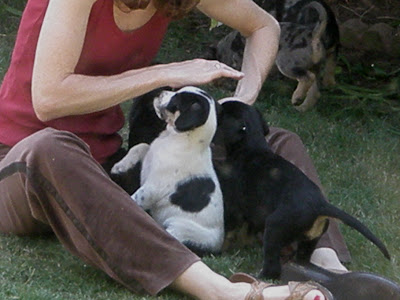 As you can see, they're much bigger. They were about one pound each when they arrived. Now they weigh between five and seven pounds each! 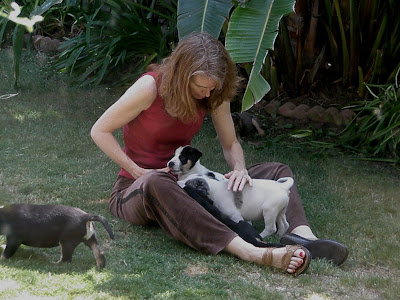 They also have wicked sharp puppy teeth, and they aren't afraid to use them. 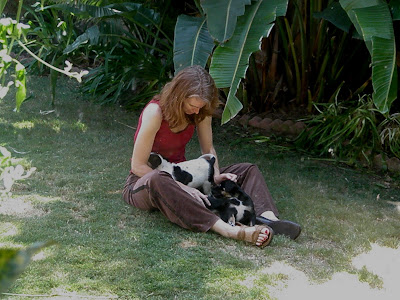 As adorable as they are, when they're in a playful mood, it's a bit like trying to cuddle a school of piranhas. 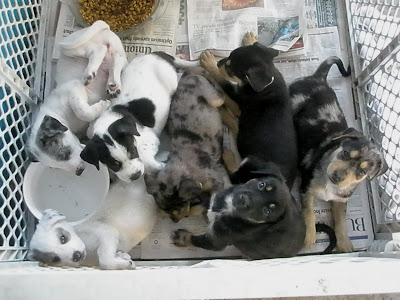 Fortunately, they still tire quickly, and spend a lot of time looking just like this.

I'm really going to miss the little guys when they go to their new homes.
Posted by Yarnhog at 5:28 PM

So glad to hear they are doing well! I can just imagine how hard it will be to give them up!

You must have received the telepathic message I sent this morning wondering about those pups. Any word on the "shelter?"

They're are so adorable!!! Still in love with that little one on the bottom left of the last pic - what a sweety!!

They are precious! So good to see them healthy and thriving.

Awww, they're so cute and chubby now!

I'm so glad they are doing well. They look adorable!

Yeah puppies! I hope they all find wonderful happy homes once they leave your home. Or you could start a puppy farm.

Sleek rolls of puppy fat! Alert expressions on their cute faces. A far cry from how they looked upon arrival. I hope they will all end up with owners who care for them as well as you have. I'm gonna miss the progress reports and pics though!

Puppies are my favourite waste of time! And yes, they do spend most of their time sleeping, though my lot make up for it when not!