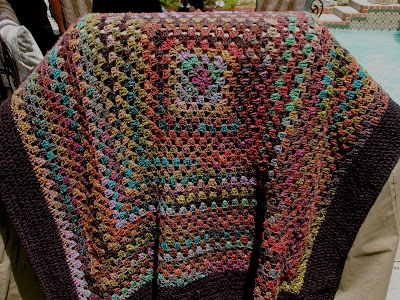 It's done! I used the purl bee granny square tutorial to make this. I think you could easily make one of these even if you don't know how to crochet already. These pictures are of the afghan unblocked. It's currently soaking and will be blocked tomorrow. The finished size pre-blocking is about five feet square. 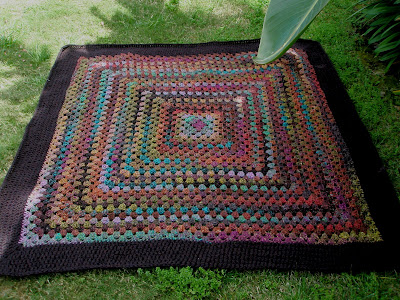 I used 10 skeins of Noro Iro plus a bag of unknown recycled brown wool I found in the stash for the border. I just crocheted until I ran out of the Noro, then switched to plain double crochet (I think) for the border and continued until I ran out of the brown yarn, which I held doubled. If you don't already know this, crochet really, really eats up yarn. I think I had a whole sweater's worth of the brown yarn. 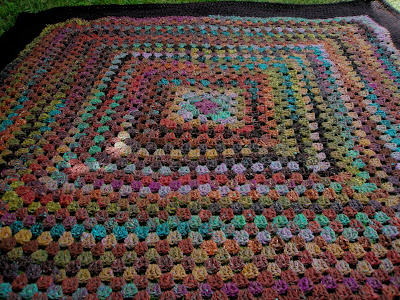 I used a size J hook, because it seemed to be about right and I had one. Gauge is pretty irrelevant with an afghan, as long as you like the fabric. I can honestly say I loved making this, despite the problems I had and the massive amount of ripping I did to solve them. (After I got the whole thing done and the ends woven in last night, I discovered a mistake with a corner only inches from the beginning. It doesn't throw off the shape, though, and I'm not about to rip the whole thing again, so I am embracing the error as proof that it was made by human hands and not a machine.) 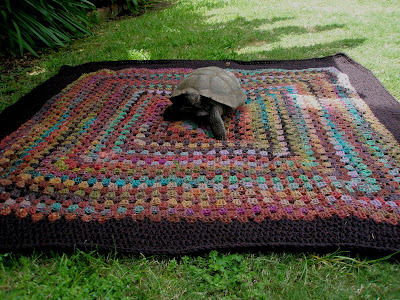 The tortoise came over to check it out during the FOto shoot. I think he likes it. 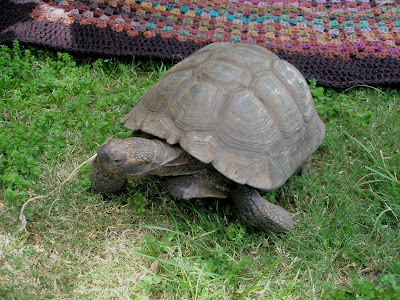 [Endangered California Desert Tortoise, which can't be re-released into the wild. I have a permit for him. My aunt rescued him from another owner more than 30 years ago, and he was already an adult then. I've had him for the past three years, since my aunt moved to Colorado, so we know he is approaching 40, at least, and may be much older. No one knows how long they live, but they are known to live at least as long as humans, and probably longer. I'm going to have to put him in my will.]
Posted by Yarnhog at 2:17 PM

The afghan is gorgeous, and the tortoise is so cool!

tortoise on the afghan is SO waiting for some sort of caption- give me a few days-maybe it will come to me.

It must be in the air... forest canopy is blocking as I type!

The granny square is awesome, I love the brown border you chose to do. But I think that it is way more awesome that you have the tortoise. If I lived in a desert-like place, I might ask that he could come and visit me!

Awww, he needs a blanmkie, too. It looks great and it's just his colours.

That came out so beautifully, I almost want to take up crochet. Lovely afghan, and it has a cool mascot!

That turned out beautiful!!! The brown border was a great choice.

The brown border was a good call: really brings the other colors all together.

We also have a desert tortoise. My husband taught high school for 8 years in a previous life and we had to apply for a permit and such and now we have him. Of course we also have another tortoise (different kind) because if you give my husband an inch in the animal kingdom he'll just keep adding to the 'family'. :)

Love the afghan! It came out beautifully. The tortoise is pretty darn cool, too. My youngest son would be sooooo jealous!

It's SO beautiful! I love the edging - the color is perfect!

I also like that you're leaving the error in. I read somewhere that there's no such thing as machine-produced crochet. Crochet can only be made by human hands. Now, every time I see a bunch of crocheted stuff at Target (bags, tank tops, etc.), I feel bad for the people payed pennies to make it.

That tortoise is very cool! Does it have a name? What's the gender?

Very pretty afghan! The brown border is a really nice touch! I think the tortoise was giving you a subtle hint.

I'm loving that afghan! I don't crochet. Um, yet.

I have the yarn. I have the hook. I love the dark single color border. I plan to shamelessly copy you in every single way on this project. (Except for the tortoise, I don't have one of those. Although he is quite cool...would Dooley count?)

The afghan is beautiful!! Thanks for sharing.

The afghan is awesome! Those last few rounds must have been almost torture to finish...I crochet, so I know....
Love the tortoise! We don't have many of those around here-LOL!- but I'm sure my kids would have loved it. It's not easy to get a permit though, so we'll stick to sheep and cats;-)

I love it and am so impressed by the speed with which you produced. So okay, if you aren't popping speed, you must have a load of fairies helping you out, no?

Your afghan is beautiful (I love granny squares) and the Tortoise is awesome... my boyfriend would give his left eye for him... he loves tortoises and we are constantly having a tortoise-turtle debate... mostly because I just like to get him wound up.. I like turtles and tortoises equally.

Gorgeous colours! I love the tortoise too. He's cute!

It came out gorgeous! Beautiful and comfy even for a tortoise. I've been thinking about the tortoise lately and wondering how he is doing. Glad he made an appearance!

LoVe it!!
I think the brown border really sets off the Noro colors!!

Glad your primordial pal likes your afghan, it is truly impressive:)

These pictures really make me happy. A tortoise on a granny square--cute.

The blanket is great!

That blanket turned out great. One human error is acceptable. You know that nothing should be too perfect anyway.