Last week I finally got ahold of some acid dyes. I've been tossing around the idea of dyeing my own roving for a while now, prompted primarily by the high cost of hand dyed roving and my apparent inability to resist buying it. So yesterday, I decided to give it a try.

I had a pound of this lying around: 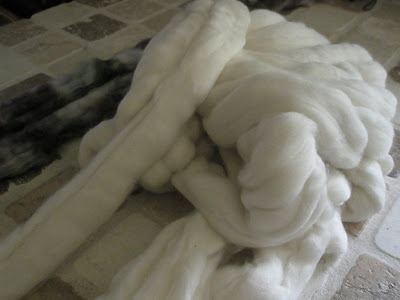 I wanted to try to make it look more like this: 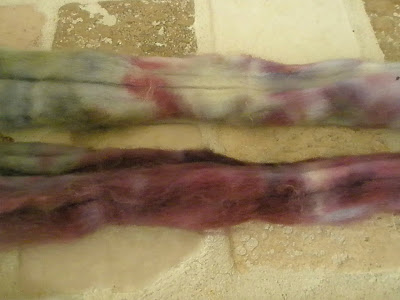 For the record, this is roving I bought already dyed on Etsy. You can see how the undyed compares to the dyed roving here: 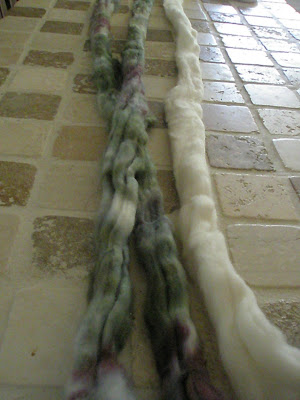 According to my research, the first step was to turn my mound of roving into smaller roving balls for soaking and dyeing. This is about eight feet of my roving wound into a ball: 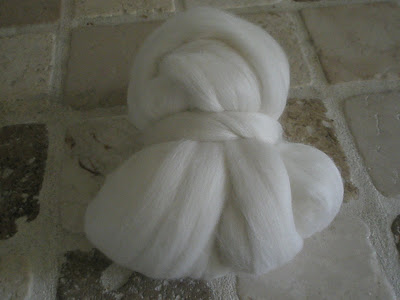 And here it is with all of its siblings: 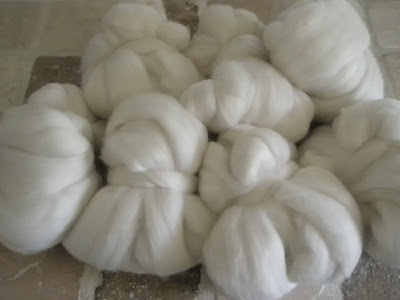 I put all these in a tub of hot water with just a little dish soap and let them soak for about half an hour. While I was waiting, I prepared my work surface, otherwise known as the kitchen counter. 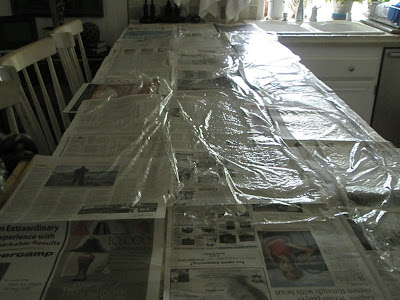 More is more here. I cannot stress this enough. Lots of newspaper is critical, unless you really want rainbow colored counters. I covered every square inch, and then spread out long strips of plastic wrap for wrapping the roving after dyeing. [I never realized how difficult it is to spread temperamental plastic wrap out in neat, eight-foot long strips. At one point, I looked like I was attempting some sort of marital enhancement role-playing. Fortunately--or maybe not--there was no one here to witness it.]

Once everything was completely covered in newspaper and plastic wrap, it was time for the fun part--mixing the dyes! 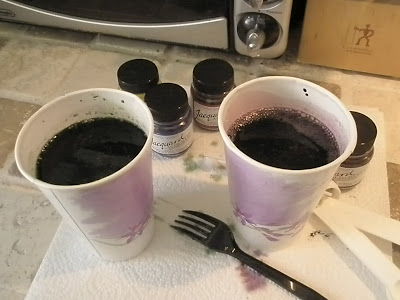 What's that? There's no newspaper here? No plastic wrap, either? Wow! You're right! There is, however, a handy dandy paper towel, whose main purpose is not, as you may think, to keep the 20 ounces of concentrated dye off the stone counter top, but instead to hide the dollar sized blue stain I made when I knocked over the pot of powdered dye onto the one part of the counter I hadn't covered in newspaper. Which was, of course, where I had decided to mix the dyes. Not to worry, though, I wiped up most of it...with my bare hands, which are now a lovely shade of periwinkle, and will likely remain that color for the next several weeks. I did put on the gloves right after that, though.

Once the dyes were ready, I carefully removed my little roving balls from the hot water, squeezed out most of the water, and spread them out on the plastic wrap. 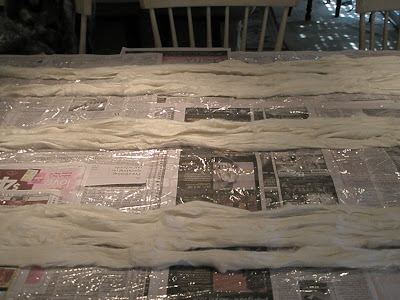 Aren't they pretty? I will admit to a long, long moment of second thoughts as I prepared to pour dye all over a sweater's worth of beautiful, natural merino roving. One might almost think a test piece of roving would make more sense for a first attempt at dyeing, wouldn't one? 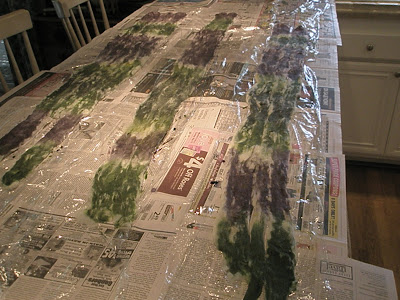 But patience has never been my strong suit. Instead, I used a couple of those big eyedroppers you get at the pharmacy for squirting medicine in a baby's mouth and went wild with the green and purple. Yes, I did say green and purple. The roving I was trying to copy was green and purple. I know it sounds awful, but the roving I bought was really pretty, sort of olive-y and plum-y with bits of white and brown. I left white patches between my colors, not really wanting to find out what color you get when you mix green with purple. I also ran out of dye halfway through and had to mix more. Which, of course, proved impossible to do with any accuracy, so I squirted the new colors so they mixed with the old colors and looked at least somewhat more deliberate. Or so I thought.

Once I had the rovings colored to my satisfaction (more or less), I sprayed them with a generous amount of white vinegar, using a standard household spray bottle. When they were well wetted with vinegar, I rolled them up in the plastic wrap like nice, fat sausages. 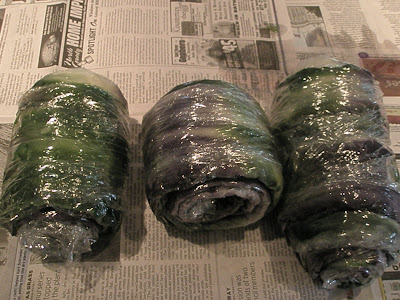 I don't know why they're all different sizes and shapes. I could have sworn they didn't start out that way.

I put the sausages into a large (improvised) steamer pot with a couple of inches of water in the bottom, not touching the steamer basket, and turned on the heat. I simmered the pot for 45 minutes, then turned off the heat and went to the gym. 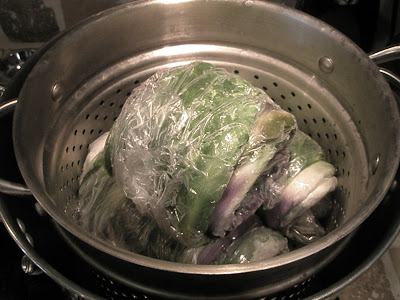 When I got back, I unwrapped the sausages, rinsed out the roving, gave it a quick spin in the washer to get out as much water as possible, and hung it out to dry. 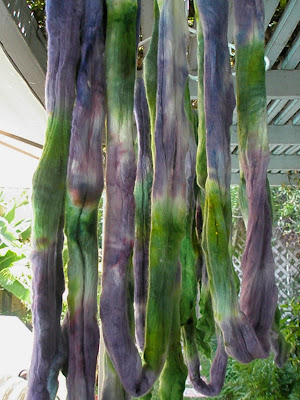 Nope. Nothing like the roving I was trying to copy. At all. The green is grassy rather than olive, and the purple is more grape than plum, even though they looked the way I planned them during the dyeing stage. My white patches pretty much disappeared during the steaming, and some of the colors separated a little. This roving is still wet, though, and the colors may change again when it's dry. It's hard to say how this will spin up; I am notoriously bad at predicting what roving will do when it's spun. It could turn out to be the world's ugliest yarn. In the meantime, though, I'm calling my first handpainted roving Petunia, because it reminds me of these: 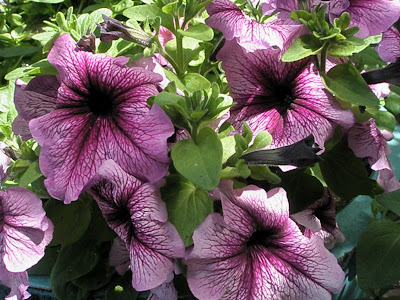 Not quite so ugly when you look at it like that, is it?
Posted by Yarnhog at 7:00 AM

I think they are lovely.... and here's a hint.. Spray Nine, Fantastik... all those spray are great for taking acid dye off the counter, floor, cat..... where ever (well maybe not cat.... he had to stay purple for a while)

What a fun post! Fun and informative, that is.

You roving really looks like those petunias. I love the colors, even more than the ones you were trying to copy. Oh, please try to spin it soon, I'm dying to know how it comes out!

I think it looks lovely and knowing you, it will be spun up, knit into a sweater and then overdyed to the color you want in about a week.

Your roving turned out really pretty! I can never predict how pretty roving will spin up though so I'm interested to see how it looks.

As for copying the purchased dyed roving: you could try soaking the roving and sprinkling dye powder directly onto the roving before steaming. It will spread on its own but won't be as saturated as with the mixed dyes. I've had some (limited) success with that method.

Oh Fun! So far, I've been content to dye already spun yarn, mostly because I haven't yet spun enough dyed roving to feel confident that I won't spin it into doo-doo. Especially if I dyed it myself. (hmmm, who knew it would end up looking like that?) Good for you for going for it! Your roving looks pretty.

Fun but messy day! And I love how it turned out. It's just like a pot of petunias. I saw a button at Maryland Sheep & Wool last weekend that said "Leave me alone, I want to dye." Also saw another one that said, "I knit so I don't kill people." harhar

I think it is lovely. I look forward to seeing how it spins up.

I am so the opposite of having the skill set needed for that adventure.

I love the way it turned out and appreciate the picture heavy post- very informative.

Great, informative post! I happen to think that green and purple look quite nice together. Keep us updated with the drying and the spinning and the plying and the knitting, okay?

I love it so far! What will happen next? Oh, the suspense!

I have to admit, my favorite color combo has almost *always* been green and purple. What exactly is roving anyway?

Nothing like jumping into the deep end of the pool. :o)

I'm sure it will turn out just fine and like another has already said, you can always overdye it!

Baking soda on that spot on the counter might help too. Curious as to why you sprayed down the dyed roving with vinegar instead of just soaking it in vinegar water. (that could have been why you had some of the separation of colors, not enough or not evenly distributed vinegar in spots) but oh well just think of the depth of color you'll get after it is spun!

You're brave! It looks like a lot of fun though. Messy, but fun! I've never dyed anything, nor spun( I have a spindle that I'm determined to try!)...but I've got a fleece in the tub trying to clean it, some of it already drying, and my youngest told me not to try any spinning until she was back from school tomorrow!
It's easier to just buy the yarn...but not as interesting;-)

Wow! That looks like fun. I love the colors!

First off, I really like the way it turned out. I don't think it will be ugly at all.

Mixing purple and green will give you brown.

There is a wonderful product called Reduran that will take the dye right out of your skin. I dye fabric and that stuff works wonders. I don't know if it would work on your counter but its worth a shot. Dharma Trading Company (they are online and out of California) sells it and its worth it.

I think it's gorgeous! I've had really good results using Reduran to take the stains (mostly) off my hands...and Chlorox Clean Up has removed most of my disasters from the (ahem) white kitchen tiles.

Hee - my verification is 'diewetur'. Dye wetter? Is that a suggestion, Blogger...?

Great post! I love your tutorials. The colors did turn out rather lovely I thought, very springy ;)

I love the colors! Can't wait to see it spun up. So far I've resisted falling down that particular rabbit hole, but my resistance is definitely weakening. Actually the only thing holding me back right now is lack of funds for another (rather expensive) hobby/obsession. Hmmm, maybe being slightly broke isn't all bad....

I have to agree, they turned out great. Either way it was a great learning experience, for you as well as for us. Now I want to see it spun up too.