Remember how, when you were in junior high, and one of the Mean Girls made fun of you, your mom would tell you, "Don't worry about it. What goes around comes around."? [At my junior high the Mean Girls were called the "socs"--short for "socials"--and their leader was a girl named Courtney Buffington (really!), who did her best to make my junior high school years a living hell. But I digress.] And even though it didn't help at all when your mom told you that, it turns out that it was true.

Two days ago I was snickering at the Yarn Harlot's tale of the elephant sock. I mean, how could you possibly not recognize that this thing was a disaster in the making? How could anyone be in such denial as to not realize that there was no way this was going to end up being a sock? If you haven't seen it yet, you seriously need to go check it out.

And then yesterday, I was giggling at Trek's failure to note that the neck shaping on her aran cardigan needed to happen simultaneously with the armhole shaping, especially since I had blogged about making the exact same error with the exact same pattern well before she made the mistake.

So I suppose I had it coming. What's wrong with this picture? 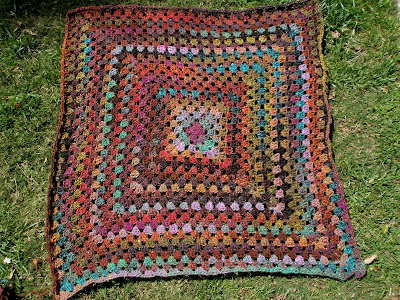 If you said, "Hmm, that lower left corner looks a little....odd," you are correct. It does look a little odd. A little Dali-esque, actually. [Not that I have anything against Dali and his melting clocks. I just don't really want to crochet one.] The thing is, it's been looking like this for a while now. And I kept thinking maybe there was something not quite right. It might have been the funny little wrinkle I kept getting at the corner when I tried to smooth it out. It might have been the way that my square didn't really look quite...square. It might have been the way that I seemed to be changing to a new round a little too often. But despite the nagging sensation that all was not well in crochet land, I kept going. Despite recognizing several times that it wasn't getting better with time, I kept going. Even last night, when I finally discovered what was causing this not-quite-squareness, I kept going.

This is what caused the problem: 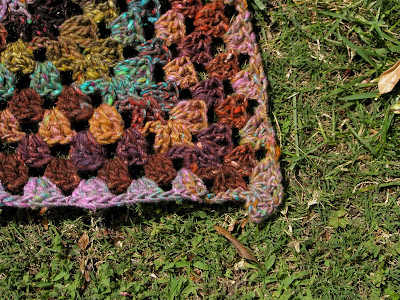 See that bump on the corner? That bump is the start of a new round. Only one corner is supposed to have that bump, and when you reach it, you know you are starting a new round. If you look closely, though, you will notice that two of my corners have that bump: 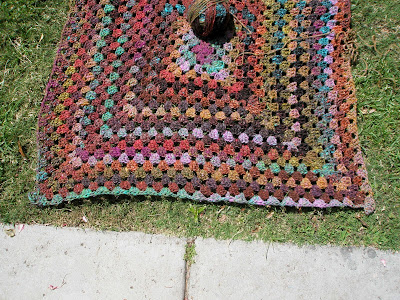 That is a bad thing.

But not, I thought, bad enough to warrant ripping back 10 rounds. Doesn't sound like that much? Bear in mind that 10 rounds on a 42" square is more than it sounds like. Think "widest part of lace shawl" and you'll be in the ballpark.

So, as we've already established, I kept going. I fudged the bad corner. I figured, who's going to notice? I had not, at this point, laid the thing out to take a picture, so it wasn't until I did that this morning that I realized I had a much bigger problem and finally accepted there was no alternative to ripping. 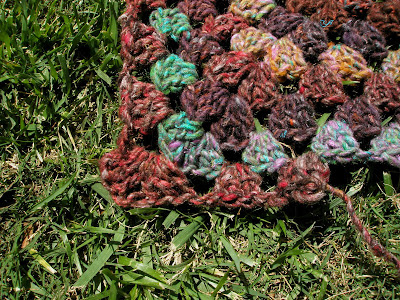 That's it. That corner there is the culprit. And... 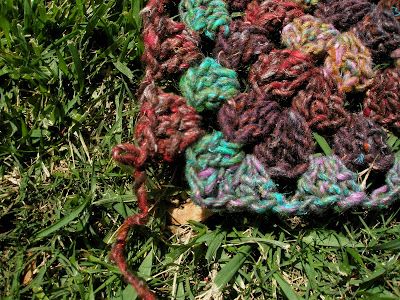 Now all I have to show for the past few days of marathon crochet is this: 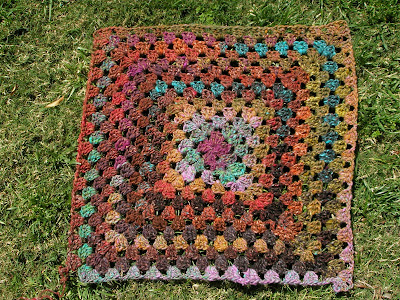 Actually, that's not all I have to show for it. I also have this: 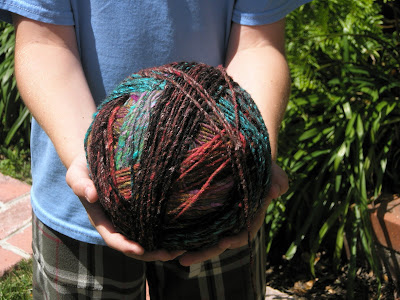 That, folks, is a 350 gram ball of bulky weight yarn. Three and a half skeins. Three days worth.

I feel your pain! Sometimes we have to get smacked down after getting too cocky. I just did! My square was smaller than yours, though...

those granny squares can be wily that way. And then, when you're done and stop crocheting for a few months, you go back and it happens again because it's just that kind of mistake. There will be some very happy colorways in the square.

You're a bad influence on me...I just ordered some Noro Iro closeout from Webs so I can do this too...*sigh*...

I'm sorry! I won't dare laugh because I know what can happen.... I had to stifle a giggle at the end though when I saw that giant ball of yarn! Crochet on Yarnhog!

What was that you were saying about my sweater shoulder issues???

That's a big 'ol ball of yarn! I couldn't tell you how many times I have ignored nagging little feelings myself. Too many to count!

Two Cables and a Frapp said...

Well, the yarn you're using is beautiful and if I even giggle a little, this will surely happen to me !!!

Oh dear. I hope you'll revisit it in the future!

You know, Courtney Buffington may be on Facebook. Hee hee!

Even though you kinda sniggered at other folks knitting issues, you are no Courtney Buffington.
That is some mega ball of yarn. It's the size of a human head!

Ouch! At least it's really pretty! Like the really pretty boy who doesn't treat you quite right but he's sure nice to look at, right?

I thought you were going to tell us that you just saw a picture in the paper of Courtney Buffington being arrested for shoplifting and she weighed 400 pounds. Sue Mills and Theresa something were the girls at my school.

Gosh what a huge ball you have!

(I love th colourway of the blanket)

Courtney Buffington? I just laughed out loud at my computer screen. Work-mates think I am crazy...

You are seriously such a trooper. Also, lemme guess, Courtney's nickname was 'Court'. Am I right? I know the type...