Yep. It's true. At least it wasn't knitting I messed up.

Anyone remember a few weeks ago when I had jury duty? No? Ah. Maybe I didn't mention it. I've been called for jury duty every six months for the past ten years. Each time, I've had the court-approved excuse of "small children for whom financially-feasible childcare is not available." This time, though, I had to admit that two kids in school all day and a husband who works at home (and could potentially pick them up after school), did not really count as a valid excuse. Also, I've always wanted to sit on a jury. So I went.

I got called in for a really interesting criminal case. There were three groups of 21 potential jurors, and I was in the last group. All of us were in the courtroom for the juror interviews. I sat listening to interviews for eight solid hours, and they never got to me. I couldn't knit, either. But it was really interesting, all the same. And even if they had called my number, I'm pretty sure I'd have been excused. I'm a lawyer (civil, not criminal), and lawyers generally don't get seated as jurors (although there was a young corporate attorney ahead of me who did get on the jury; all the more reason I wouldn't have made it, I suppose. Can you imagine two lawyers on one jury?)

Anyway, one would think that answering the jury summons would get me off the hook for at least...what? A year? Six months? But I got called again. Now, to be fair, the first summons was for state court, and this one was for federal court, and never the twain shall meet. In state court in California, jury duty is a one-day/one-trial service. You show up for one day; if you don't get seated on a jury, you're done. If you do get seated, you do one trial, and then you're done. I did my day.

Federal court is different. You are on call for a month. They send you a letter telling you when to call the court juror line, you call, put in your number, and the recording tells either when to show up, or when to call back. If you get called in, you go for the day, and either get on a jury or get sent home. Either way, you're still on call for the rest of the month. And you have to remember to call each day that you're told to call. I've been on call for over a week now, and it's been a challenge. Under the best of circumstances, I'm not that great with schedule changes. But having to wait until after 6 pm (when they post the next day's jury calls) to find out whether the next day is completely shot to heck has been frustrating. And trying to keep track of which days I have to call in has been an exercise.

So last night, between dinner and taking Older Son to Science Olympics practice, I forgot to call. I did remember that I forgot to call, right after I dropped the last kid off at school this morning. So I called in, and, when I discovered I was supposed to have been at the courthouse an hour earlier, "pressed three to speak to a jury clerk." Only there were no jury clerks in the office, which wasn't open yet. I debated whether to drive downtown (about a 40-minute drive) or wait until the office opened to ask for instructions. I waited. And waited. And waited.

I hate being late for anything. It drives me almost crazy. I'm always at the airport two hours early. If an invitation says "7:00 pm", I'm outside at five 'til, waiting for the clock to change. Even my kids were born early. It's pathological, I swear. So sitting and waiting for the jury office to open, knowing I was already an hour late was torture.

And when the office finally opened, I couldn't get through to talk to anyone. After roughly 50 repetitions of "All clerks are assisting other jurors. Please try your call later," I gave up. (Have you ever noticed that recordings don't care how loudly you scream?) I got dressed, put on makeup, and was doing my hair when my husband announced he had the jury office on the phone (thank God). They weren't very happy with me, but I'm pretty sure this sort of thing happens all the time. It must, right? The clerk changed my status from "failure to appear" (does that sound as ominous to you as it does to me?) to "time off". And told me to "be sure to call tonight."

I'm hoping this will help: 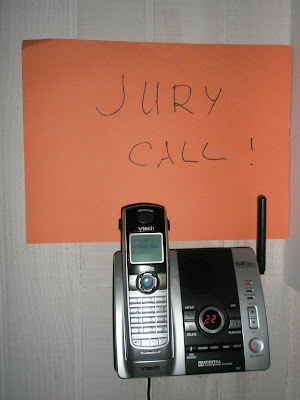 I don't know how I'm going to make it through another three weeks of this.
Posted by Yarnhog at 9:24 AM

I would never make it. Seems like there should be a better way to do this. A month is along time.

The only kind of jury service I've done is federal. Hate it. Always get called to sit on the really nasty icky cases. You have my sympathies.

Never had to do federal, but be grateful you're not doing federal grang jury duty. That's a weekly committment for months and months and months. I hope the fed at least let you knit. Hope the big sign works.

Good for you for being happy to do jury duty but that is the worst way to arrange somthing I have ever heard. Good luck.

Oh my goodness....I hate to be late as well. Good luck with the next few weeks.....and did they have to pick December for you? Total sympathy with that one!

Thanks for reminding me. I sent in a preliminary survey for federal jury duty about 2 months ago. Yee haw :o/ I think that sign by your phone will do the trick

Heh - And people wonder why I kept having babies! :p

Good luck! Being a spouse of a military member means you don't get called for jury duty in Canada. How cool is that?

Oh man, that sucks. I've never been called for Jury duty, I wonder how it works in Canada.

I hate it when I do things like that. Aargh.

that is craptastic. i have no other words for this situation.

I think THEY ought to be the ones to call you. The onus really should be on them. What an imposition. I always get excused. I had metal health care in my late teens and that disqualifies me.....

Like you, I am early. I hate being late and I hate it when people are late for me, unless they have phoned to say so.