I will apologize right up front for the quantity and quality of the photos in this post. The quantity is my fault; the quality, not so much. I will explain later.

Like most of you, I own a number of knitting books. Some are technique books, some are stitch dictionaries, and some are pattern books. Of them, the pattern books are the most fun; who doesn't love to look at beautiful sweaters, shawls, or socks? But they're also the books I "use" the least. I rarely knit straight from a pattern. Most of the time, I start with a pattern, then modify it to suit my body, my taste, and my yarn. When I do buy a pattern book, it is usually not because I want to use the patterns, but because there is one or more project that I find inspiring in tangible way, meaning I can base an actual project on it. Even when I love a book, like Wendy Bernard's Custom Knits, I rarely knit more than one project from it, at best. (In point of fact, I have not made a single project from Custom Knits, although I have done two top-down sweaters using techniques from the book since I bought it a couple of months ago.)

Which makes it almost shocking to me that I have come across a book with not one or two patterns that I want to knit, but a whole wardrobe of them: 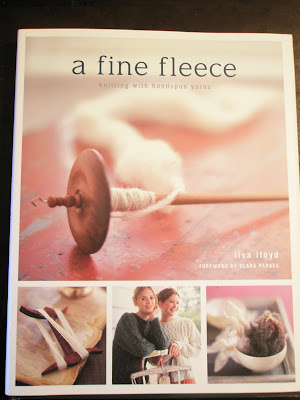 This is an amazing book. It is organized around the concept of using handspun yarns to produce gorgeous, heirloom sweaters, and it is sort of generally directed at spinners, since it provides instruction on different fibers and how to spin yarns for specific purposes, but it is not a spinning book. One of the interesting aspects is that each project is shown in both a handspun yarn and a substitute commercial yarn, sometimes quite similar to the handspun, and sometimes completely different, which is particularly useful, since it illustrates how much power yarn choice has on a finished project.

But for me, the definite highlight is the patterns.

I love this take on a traditional aran: 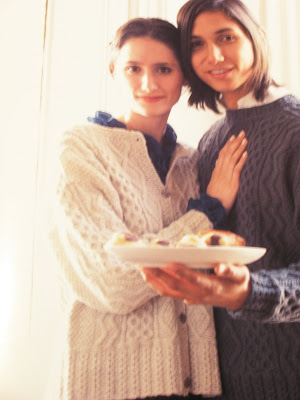 Or how about this one? I never thought of an aran as "dressy" before. 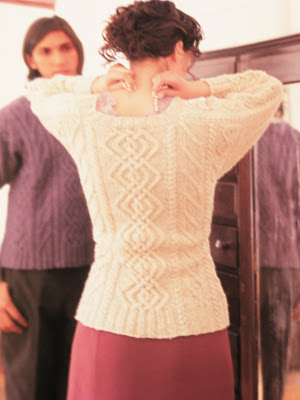 And how could you not love this? 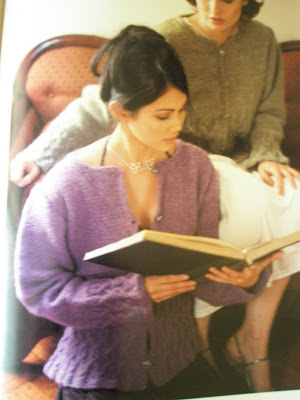 There's a men's and a women's version of this one. I love the collar. 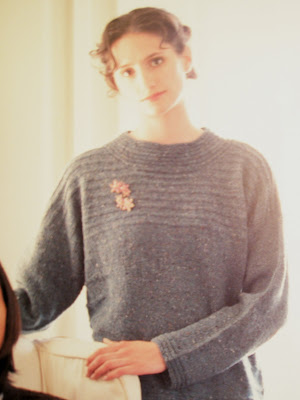 This Chanel-esque one caught my eye, too, although I don't like either of the yarns they used for it. 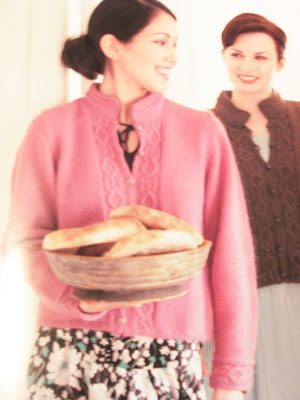 And here's where I'll apologize for the photo quality. I took several shots of this and couldn't get a clear one. Then I realized it was blurry in the book. A lot of the photos are. Most of them showcase each sweater in two yarns, often with one in the foreground and one in the background, with one or the other out of focus. And many of the photos, while beautiful, are not particularly useful for a knitter who wants to get a clear view of the garment. They are either partial shots, closeups, or too far away, or they only show the back, etc. For almost every project, I found myself turning the page to see another view, only to discover there wasn't one. This is one of two major issues I have with this book.

It really irritated me with regard to this sweater, which made me gasp out loud with delight: 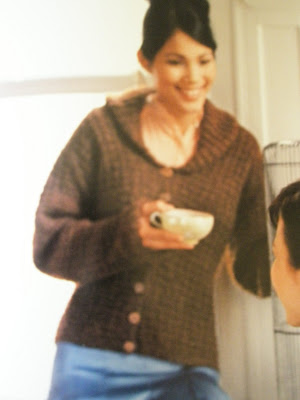 I love this sweater! See the texture? Not so well? Yeah, well, get used to it. The only other picture of this sweater is this one: 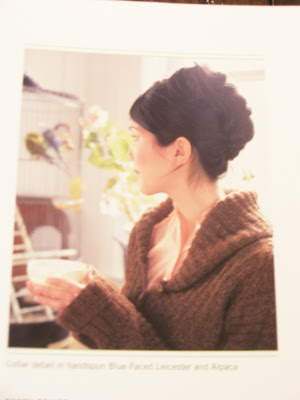 And yes, they are in "soft focus" in the book. That won't stop me from making this sweater; I have the perfect yarn in the stash, and I've been wanting to use it for a cozy, squishy cardigan. I'll make mine a little longer, and add some waist shaping.

Obviously, no book is going to appeal to everyone equally. If you don't like cables and textured patterns, and rustic, woolly yarns make you itch just looking at them, this probably isn't the book for you. It runs heavily to aran/fisherman-type sweaters with lots of cables and textured stitches, although as you can see from the pictures above, there are certainly other designs as well. There are also some scarf, hat, and sock designs. Most of the patterns are unisex, which leads me to my other major complaint: most of the patterns start at a 38"-40" chest and go up from there. If you are a plus size, you are well-covered with this book. If you're on the small side, be prepared to do some creative re-sizing, or swim in your sweater like the models in the book. (Most of the sweaters also lack waist shaping, and many have drop shoulders, so unless you're shaped like SpongeBob Squarepants, you may want to consider some modifications there, too.)

But despite what I consider to be fairly significant flaws, I really love this book. As a spinner, I especially enjoyed the section on different fibers. Ever wonder whether Romney is coarser or finer than Corriedale, or what the difference is between Blue Faced Leicester and Border Leicester? I know now! There's also a bit of information on blending fibers, estimating fiber quantities per project, etc., but nothing you wouldn't find in greater detail in a spinning book. As a knitter, I find the projects absolutely irresistible. There is enough quantity and variety here to keep me busy all winter. Now, if the weather would just cooperate...
Posted by Yarnhog at 3:09 PM

I have this book as well and love the patterns in it. I want to knit "Amanda" first. It's so texturey and feminine.

I saw a shop model of one of the sweaters at my LYS, and it was gorgeous. Can't remember the name, Portland, maybe? But wow. So they showed me the book. I love that pink cardigan, too, and I'd be much more likely to wear a cardigan. I didn't notice the pix being soft focus, but I only did a quick flip through. I'm not a spinner, but the sweaters were gorgeous!

Love the sweaters you just showcased from that book. Beautiful!

Thanks for the review- it's one I'll pick up when jonesing for a new knitting book!