The first yoke didn't work out quite right. The general idea was correct, but the fit was off. The neck was too wide, and the increases seemed to be happening too quickly, so I ripped and started over. (This poor yarn. Some of it has already been ripped eight times. Seems to be holding up well, though.) 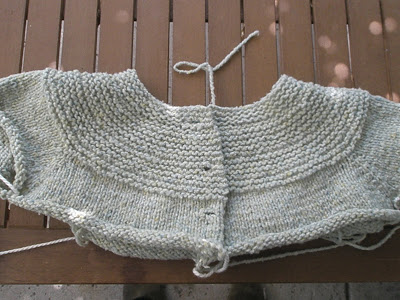 I cast on fewer stitches, and also used a larger needle for the garter stitch section to compensate for my tighter gauge in garter stitch. While I was at it, I found a better way to work short rows in garter stitch. I've never been that comfortable with the whole "wrap and turn" drill. I don't quite get it, and half the time, I can't hide the wraps. Some designers recommend not wrapping, but just pulling the stitches extra tight at the turn. In the past, I've had success just turning and slipping the first stitch of each short row, which makes the transition between rows less abrupt. This is what I did with the first few attempts at the yoke, but I didn't like the way the slipped stitch was noticeable against the garter stitch pattern. In the current incarnation, I tried just pulling the stitches tighter at the turn, which seems to be much less noticeable.

I also tried a different approach to the increases, working fewer increase rows spaced a bit further apart, but with more increases in each row (which is what Jared did in Cobblestone). I hoped this would result in a shape that is closer to the actual shape of my shoulders, instead of a funnel, which is what I was getting with the first yoke. I don't actually mind ripping and reknitting. It would drive me crazy if I were working a published pattern, because the whole reason I knit from patterns in the first place is for simplicity. The point of this project is to work it out for myself, though, so the effort is part of the fun.

Which is, um, a good thing, because when I tried on the yoke above, I wasn't happy with it. There were two significant problems. First, my row gauge in stockinette was dramatically different than in garter stitch, so my raglan increases in the stockinette section were happening at a slower rate than in the garter yoke. This means the angle of the yoke changed once it turned to stockinette, so that the edges didn't match up properly. I tried to denial; I even got out the iron and steam blocked the yoke to try to smooth it out, but in the end, I was forced to admit that I would never be happy with it. Which wasn't too upsetting, once I discovered problem number two, which is that I completely forgot to continue the button band in garter stitch, so that it was rolling at the edges, and the buttonholes were not evenly spaced, thanks to the different row gauge. Sigh. 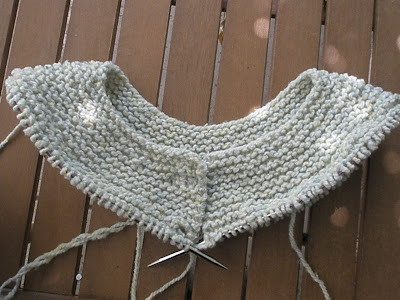 Here's Take Three. This time, I took kmkat's advice and turned to the venerable Elizabeth Zimmerman for guidance. After several hours, much math, and some slight bleeding from the ears, I used her formula (more or less) for the yoke increases. All of the increases will now happen in the garter stitch part, so that they will be done before I switch to stockinette, which will eliminate the problem of different row gauge. This means I have given up on the neat little raglan increases that I so enjoy, but it may result in something I can actually wear. So we'll see. I haven't ripped Take Two yet...just in case.

For those who have expressed an interest, if this works out, I will write up a pattern and make it available here. Assuming, after I finish laying my incompetence bare before you, that you are willing to trust anything I say!
Posted by Yarnhog at 12:30 PM

I'm loving the ride! Thank you.

About those raglan lines...could you make pretend increases just for looks on Take Three?

Or maybe enlist the use of EZ's phoney seam technique?

I'm enjoying reading about this so keep it up! Would love the pattern when you're done!

Yay for you! I'm glad EZ was able to help. Looking forward to a pattern when all is said and done.

Go, Suzanne! We're rooting for ya! I'm in awe of both your persistence and math abilities, even if it does make your ears bleed. Would love to see a pattern from you too!

wow is all I can say. I admire your persistence on this and am slightly baffled by all the knitting jargon in your writing...makes me realize I have a lot to learn.....thanks for sharing

I'm impressed, really I am! You've put a lot of thought into it! Can't wait to see it grow and grow.

Not incompetent! You are diligent and it's going to be great! I love me a garter stitch yoke. I'm glad the yarn is holdign up well with all the frogging. You go girl!

Hi Again,
I've been talking to Nataly, the designer of the original sweater and asked about how she made the sweater. Since I'm a new sweater knitter I really don't understand, but I knew you would. Here is her response on Ravelry to me. I also pointed her to your blog to show her what you've done. I think she'll like it! It looks GREAT. Does this help you at all???

Sorry for my late answer, please. I’ll try to discribe you how I knitted this jacket.

I cast on stitches for the neck-line and knit a garter stitches. For round yoke I increase evenly 16sts in every 4th row. When I knit sufficiently for yoke, I change garter stitches on stocking stitches and did some raglan increases (the location for raglan lines you can find if you take your old cardigan or jamper with raglan and apply the yoke on it).
After you knit sufficiently for parting sleeves, knit front and back parts one piece (cast on some stitches (6 or 8) in armpit) with some increases for A-lines - as A-line top-down cardigan. Than knit a sleeves round too.

Sorry, it is very knotty “pattern” but in really it was very simple to knit.

I hope I can help you just the same :)