Knitting Without a Net

Some of you have asked me how I plan to knit the round yoke jacket without a pattern, so I thought it might be interesting for me to do a sort of running commentary of how I'm working it out. (Or not. I guess we'll see.) But I'll tell you now, I don't actually know what I'm doing, so a lot of this is trial and error.

As with any project, I started with a swatch to figure out a gauge. With a written pattern, the object is, of course, to get the gauge specified in the pattern. Since I am not using a pattern, my goal is to come up with a fabric that I like, then use that gauge to figure out my stitch and row counts. 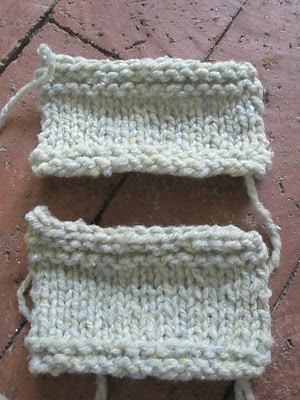 This is a chunky or bulky weight yarn, and the recommended gauge is 3-4 stitches per inch on a size 8-10 needle. I tend to knit loosely, so I started with a size 8 needle, which gave me 14 stitches and 20 rows (the top swatch). I liked it pretty well, but it was perhaps a tiny bit stiff, so I went up a needle size and did another swatch on size 9 needles. That gave me 15 stitches and 20 rows (the bottom swatch). But the stitches were a little loose and uneven.

Next, I washed both swatches, which is an important but often neglected step. Both of them bloomed quite a bit. The stitches in both evened out and filled in, creating a cohesive fabric that looks almost felted. Both swatches also relaxed considerably, becoming more drapey. Interestingly, only the swatch knitted on the smaller needles had a change in gauge, from 14 to 15 stitches per four inches.

As a result of my swatching and washing, I decided to go with size 8 needles.

Next, I had to think a little bit about the structure of the jacket. I knew I wanted to knit it top down, with a round yoke, instead of a raglan. Not having much experience knitting a round yoke, I did a little reading. I remembered that Cobblestone used a round yoke, but it was knitted bottom-up. Still, I thought it would be helpful to consider, so I pulled out the pattern and read it. In Cobblestone, all the decreases for the yoke (working upward) were done by decreasingly a certain number of stitches evenly around every few rounds. I figured this ought to work top-down, too, only increasing instead of decreasing. For a top-down raglan, you do decrease eight stitches every row. I figured decreasing 16 stitches every other row would work for a round yoke.

But before I could start, I needed to work out another little issue. When you knit a sweater in pieces, the front neck is always cut lower than the back neck, right? This is because our necks are not set on our bodies parallel to the floor. The base of your neck is higher in the back than in the front (go look in a mirror if you doubt this). So a perfectly round yoke won't make for a very good fit. If I just knit a circle, it will sag at the back, or pull up at the front, or both. I needed a way to bring the back of the neck up higher than the front.

I was certain this was job for short rows. Only I wasn't sure quite how short rows were going to take care of it. If you haven't worked with them before, short rows are just that: rows that don't go all the way across the piece. They allow you to build up one section of the knitting without building up the whole thing, so they're useful for creating a little ease in areas that might need it--to accommodate the girls in a fitted knit, for example. Cobblestone used short rows to bring up the back neck, but it was bottom up.

Then I remembered that when I knitted Sahara, the sleeves were picked up and knitted from the top down using short row shaping. So I thought about that for a while. Eventually I decided that the way to go would be to cast on the stitches for the entire neck, then insert a few short rows to build up the center part of the neck (which would be the back of the jacket), and then start increasing for the yoke.

I had the right general idea, but it took me four tries to get this: 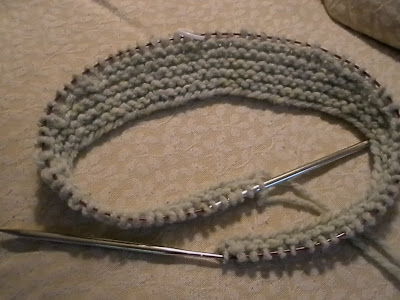 Do you see how the center is wider than the ends? That will be the back of the neck.

The first time I cast on, I worked the short rows in reverse. That is, I worked them as though I were working bottom up, with each row a little longer than the one before. It took me an embarrassingly long time to realize that I would need to turn the short rows over when working from the top down, so that each row was a little shorter than the one before.

The second time, I did this, but I didn't like the spacing of the rows; they started too far from the edges. The third time, I had the opposite problem--I started the short rows too close to the edges--and also realized the collar was too tight. To come up with the right number of stitches to cast on, I had taken a piece of yarn, wrapped it around my neck until it draped the way I wanted the collar to fit, then I measured the piece of yarn and figured out how many stitches to cast on to get that length. But for some reason, it was coming out much too short. After measuring several times, I was forced to admit that there was definitely something wrong. That something was that my gauge in garter stitch is much smaller than my gauge in stockinette, and I had measured my gauge only in stockinette. So I ripped a third time and cast on again, and now I seem to have an actual yoke happening. 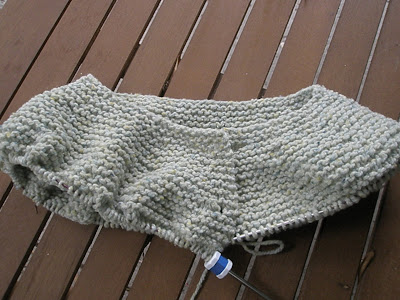 This yoke is the result of casting on for the neck, working short rows to make the back of the neck higher, then increasing 16 stitches evenly spaced every four rounds. If you look really closely, you may see that I've also made button holes along the what will be the right side.

I don't know whether this will end up fitting correctly. I have it on a 40 inch circular, but it's still too short to allow the stitches to spread out enough for me to see if it fits. My next step will be to put the stitches on scrap yarn and wrap it around my shoulders to see if I'm heading in the right direction. If so, there is another issue I need to work out. I don't want just a plain, garter stitch, round yoke. I only want the garter stitch to go to about the edges of my shoulders. At that point, I'll switch to stockinette and begin working raglan increased instead of increases in the round. Why? Because the sweater that is my inspiration used this sort of hybrid construction, and I love it. So I need to try this on to see if the stockinette portion is long enough, and if it fits correctly over my shoulders. If not, I'll be ripping again, but at least now I know how to get the shape I need.
Posted by Yarnhog at 11:19 AM

Good luck on your sweater. I'm sure you'll get it just right.

Just another thought to ponder, not sure how it would come into play, if at all, considering you are doing a round yoke with raglan shaping later...but EZ says all the increases for a round yoke sweater should be made in the upper third of the yoke.

If not although the yoke will fit OK around the shoulders, upper arms and upper chest it will restrict movement at the top of arm. ( your deltoids)

Thank you so much for this post. As a novice knitter it is extremely interesting to me to read the process of creating your own pattern. I love the "inspiration sweater" you are working from and am looking forward to your posts as you knit it. Good luck!

I'm very interested in your thoughts on this sweater. Love the inspiration sweater and have added it to my faves. Knittingschooldropout has a pattern coming out in the Winter Knit1 issue that is similar so it may help with the yoke area if you get stuck.It's http://www.ravelry.com/projects/knittingdropout/garter-yoke-cardigan
on Ravelry.

This is great. I'm loving how you think through this as I've not had all the knitting experience you have had. I want to make this sweater soooo badly now, and I'm hoping you can write out instructions for those of us without the know how!

You are so rad, Miss Designer! You could also maybe take a peek at Pam's Feb. Lady Sweater as well for some inspiration...

That is why I am not a designer. Trying to figure all that out would have just given me a headache. Looks like you're on the right track!

Check out EZ's percentage system in The Opinionated Knitter. It gives two alternatives for how to place the increase rounds in a seamless yoke raglan. Hers is knit bottom-up, but the placement of the increase rows would not change in a top-down.

The other thing she talks about -- and so did Meg Swanson in a class I took on the EZ percentage system (EPS) -- was that the short rows that will raise the neck should be at about the level of the bottom of the armhole, and that they need to extend from armhole to armhole or even a bit past. I did a child's sweater for the Dulaan project a couple years ago, before I had the EZ book or had taken the EPS class, and I put the short rows an inch or two below the back neckline. They made that part of the sweater bulge outward. Blocking helped, but did not eliminate, the bulge.

You may very well have solved all these problems yourself and be far past this point in your sweater, but I had to throw in my 2 cents.