Some time ago, in an end-of-winter-clearance-sale yarn buying frenzy, I acquired a two-pound cone of mill-end wool tweed. It wasn't a color I would ordinarily choose, and I had no idea what sort of texture it would be, but it was six dollars for a two-pound cone of worsted weight wool, so, you know, how could I say no?

And then the cone arrived, along with many other yarn purchases, and I took one look at that tweedy behemoth and got a little overwhelmed. I stuck in in the closet. Not even the stash closet. In fact, for the past year (or is it two?), it's been living on my sock shelf. No idea why. I've been using it to keep the gym socks from rolling off the end of the shelf.

Last week I cleaned out my closet. Along with my pre-baby era work pants that don't come within two inches of fastening and some blouses with shoulder pads that would make a linebacker look petite, I re-discovered the wool bale. I figured, with winter coming on and the frigid San Diego temperatures that are bound to be upon us soon, I should consider my options with regard to this rather extraordinary amount of wool.

To give you an idea of how much wool we're talking about, here is a picture of the cone after I've wound off 800 yards of yarn (washing machine for scale). 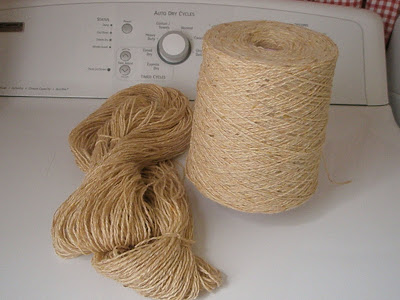 I'm not sure I've even made a noticeable dent in it. To get a better idea of the amount of fabric I could reasonably produce, I knitted a swatch. The stuff knits up to about 4.5 stitches to the inch. But that's before washing. And frankly, I would rather scrub the bathroom floor with a toothbrush than knit this stuff without washing. It feels like baling twine soaked in vaseline. That would be the spinning oil, which has not been washed out the wool.

So after knitting my little swatch, I decided I'd better bite the bullet and wind the cone off into skeins for washing. I have a niddy noddy that makes 60" skeins, so I started winding the cone off by hand, counting 120 wraps for each skein, which should--if my math skills are at all functional--give me 200 yard skeins. I wrapped for a long time.

Eventually, I had four 200 yard skeins...and a still-full cone of yarn. But since I simply couldn't face winding off another skein, I took a break to wash the ones I already had. What a difference a wash makes! The skein on the left is unwashed. The skein on the right is washed. 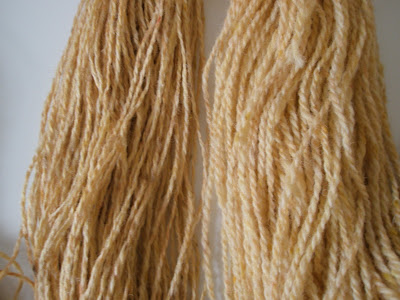 You can see that the washed skein is much, much fluffier than the unwashed one, and also lighter and brighter in color, due to the absence of (most of) the spinning oil. I'm not sure what sort of oil they use for spinning, but it's tenacious. I soaked the wool in hot water with dishsoap for several hours, then rinsed it, then soaked it in Eucalan for a few more hours before hanging it to dry. I can still feel and smell oil in the washed yarn, so I'm guessing there is more blooming yet to be done, but that will have to wait until after knitting. 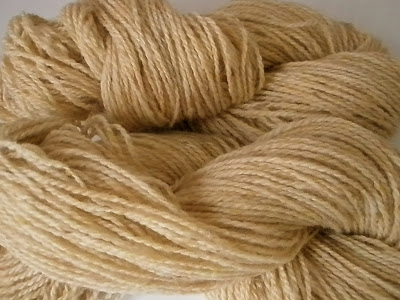 The washed yarn is quite tolerable. It's not soft--at least, not by my standards, but I am sort of a wool wimp. I love to knit with it, but I can't really stand anything itchier than a kleenex next to my skin. Which leaves me with a dilemma (naturally). I have at least 2000 yards--and possibly much more--of worsted weight wool in search of a project. It needs to be something that will not make contact with my skin. I don't need a car cozy or a sleeping bag. A sweater coat of some sort might be nice, but I don't have any patterns in mind. Anyone have any suggestions?
Posted by Yarnhog at 1:29 PM

I can only wear the softest of merino wools myself. And then only in cool temperatures. I'm so jealous of the women that can wear Noro next to their skin.

How 'bout curtains. Any need for some nice wool curtains?

My new favorite pattern book, "Inspired to Knit" by Michele Rose Orne, has a spectacular sweater coat pattern called "Winter Wonderland coat". I wouldn't knit it for myself, I'm more of a shawl/wrap gal, but I thought of you when I saw the design!

wow that is a lot of wool to contend with---what about some a table cloth or placemats. I am with ya on not having itchy stuff next to your skin---I went out and spent a boat load of dough on like 800 thread count egyptian cotton sheets for that very reason---great for sleeping on but very wrinkled when they come out of the dryer.....

That Winter Wonderland Coat is phenomenal. Of course, if you plan to wear it on the Vespa, I think Norah Gaughan has a few coats that would be appropriate.

How about hand dyeing (sp?) and making a floor rug, felting a bag, or knitting floor/furniture cushions?

I forget what people call them- not afghans and not bedspreads bbut big giant lacey things that you put on the bed and pillow cases.... for the whole house

I have your promblem solved!!!!
take a look at this-
whywouldyouknitthat.blogspot.com

I'll be watching the comments here intently. I'm not sure where you bought your mega keg of yarn but I have one too. 2 pounds of a worsted wt. charcoal tweed not next to skin soft but perfect for outer wear.

What about a nice easy Wonderful Wallaby? It's more of a knitted sweatshirt, certainly not next to your skin. In fact, you have enough yarn there to make the entire family.

I actually like the color. I don't really buy / wear gold things but its very autumnlike.

After they're knit, tie dye them!

What about something from Knit Kimono? Those coats use tons of yarn.
Over-dying might provide color, but does it change the texture?
And then there's always selling washed hanks on Ebay, getting far more than six bucks for it, and buying some yummy alpaca instead.

I'm always good for a bargain like this, even if I don't know what to do with it, but I have to have it. Where did you get it? I would suggest a big blanket too, something to cuddle up on those not so warm anymore winter or fall evenings in SoCal.

How about the jacket in the latest Knits? That would look really nice with that wool. I'm not sure you'd ever be able to wear it, but it would look nice. Know anyone that lives somewhere that gets below 60°F?

How about the Hexagon coat from Knitting Nature?

Have you considered dying the wool at all?

That's a butt load of yarn!!!Ruth's suggestion for Hexagon Coat sounds good. You might want to consider the Cabled Riding jacket form the Loop-d-Loop book. Not sure of the gauge for the Cabled Riding Jacket, but it might call for worsted wieght.

Doesn't the Sunrise Circle jacket call for that gauge? That would be really cute.