I finally got around to doing a FOto shoot of all my unblogged FO's. Being a prudent blogger, however, I'm not going to show them all at once. One a day, people, just like candy bars. Let the FO parade begin! 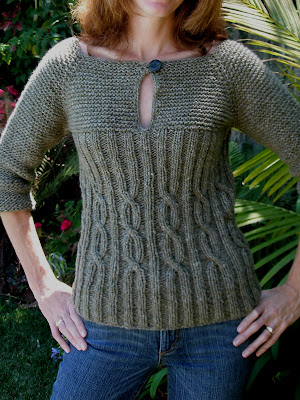 We'll kick this thing off with one I've never even blogged at all. But there's a good reason for this. I've mentioned this project a couple of times in passing (I believe I called it "the ugliest thing I've ever made"). I made most of it while we were skiing in Lake Tahoe in February. It was supposed to be Juliet, but that...didn't quite work out. It was only after knitting and ripping the bloody thing four times that I finally got it working--and realized the design didn't suit me at all. 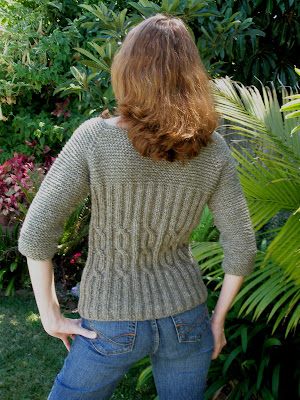 Not wanting to waste all the effort, I ripped back to the yoke. There was no way I was going to rip that sucker out after knitting it four times, so I thought I'd just wing it and come up with something on the fly. In the car. On winding, icy mountain roads. With the kids and the dog in the back and my husband demonstrating his winter driving skills with great enthusiasm and little concern for my utter lack of interest in seeing how neatly he could pull out of a slide or my complete devotion to reciting every prayer I'd ever heard while keeping the car on the road by sheer force of will.

Needless to say, I was less than pleased with the result of my design efforts. 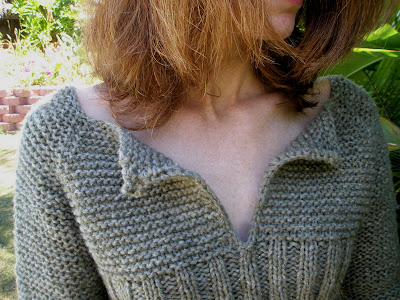 When we got home (in one piece, praise all gods that be), I tried it on and then promptly stuffed it behind the sofa in utter disgust, where it has remained, awaiting frogging, ever since.

And then, in my post-Dickinson project clean up, I came across it again. I pulled it out to frog and it occurred to me that it wasn't as ugly as I remembered. And the yarn was soft and pretty. So I tried it on again. Not one of my better works, certainly, but not--I thought--beyond hope. It did fit pretty well. A little modification to the body, maybe. A couple more inches of length. Maybe some sleeves, and one of those left-over buttons from the CPH... 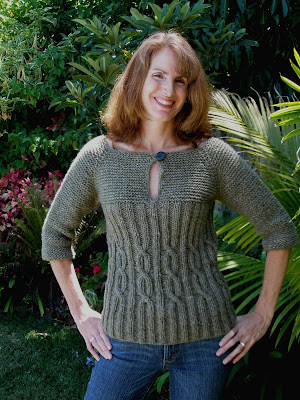 I adore it! If you ever feel you really don't like it, ship it on up to Canada for me. :)

You are too clever! Looks great now!

Very beautiful - fits great, lovely design, and wonderful stitching. You should be proud of such an attractive sweater!

This is gorgeous! I wish I could come up with something that beautiful on the fly! ::applauds::

this looks great. i can't believe you just made this up. you are such the kind of knitter i dream of being. i am so jealous of all your sweater fos. can't wait to see the pics and posts. and by the way, the spider post was great. i got shivers reading it. huge floating spider webs--that is the stuff my nightmares are made of.

i love it! the color and the style look great. i like the shawl pin in the next post too!

The sweater is gorgeous! You did a really nice job!

It looks great. You certainly know how to make lemonade out of lemons. I hope that comes out as a complement because that's how I meant it.

I think it's adorable on you! Love how the cables set at the waist quite naturally create the shaping you want there. And the color is perfect for you. I'm glad you stuck it out and didn't frog it after all.

Yes wow!!! I like it and I like the colour and the fit. You should write up the pattern and market it. Nice Job.

Veeeerrrrry nice! I'm completely impressed - I have trouble coming up with a simple scarf pattern that looks decent. You whip out sweaters like it's nothing. I think I want to be you when I grow up.

I think it's very pretty, amazing you were able to design in a moving car. that says something!

I think this is very cute! Well done!

It looks like your issues with sizing are over. This seater looks fabulous. Love the fit, love the design. Ya done good Woman!

It's pretty sad when even your'failures' looking stunning and make me envious. *sigh*
Oh, well. Back to the salt mine....

Love the sweater, pattern, color and all!

I don't think it's ugly at all! I wish I could design a sweater on the fly and have it turn out half that good! Very nice!

All your FO's are gorgeous (you're smokin' in the figure baby!) but I like this one the best.

Its very far from ugly. I like it alot. Good neutral color, looks great on you!

can i tell you! my mouth is hanging open over here.
i am a little late reading blogs, and after one week, you have these AMAZING projects finished!!!!!
i am in love with this sweater. and it looks fantastic on yoU!

It's really beautiful and flattering. :)

I love the way the cables do the waist shaping! Such a cute sweater and it looks fabulous on you.