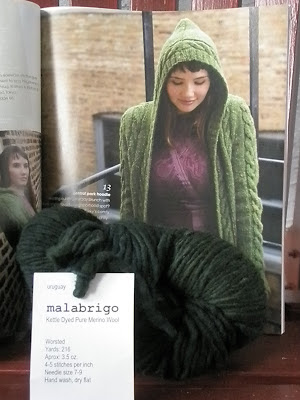 That's right, folks. Meet my new project, the ubiquitous CPH. I'm a little slow jumping on this particular bandwagon. I'm not much for bandwagons, actually, but when it's such a lovely little project and I happen to have on hand eight--count 'em, eight--skeins of Malabrigo worsted that I scored at a great discount on Destash, what's the point in resisting just for the sake of resisting?

The gauge is probably going to be a bit finer than the pattern calls for. I say "probably going to be" because I have not swatched. I have worked with this yarn before, though, and I have a completed and washed finished garment to judge by. I suspect that I'll be able to just knit one size larger than I usually would and end up with a finished sweater the right size, but I'll be spending some quality time with my calculator before pursuing that course of action. I know math lies, but I believe in second chances.

This color is called "Vaa". It is hard to describe. Hard to see, in fact. It is a very dark, olivey green and midnight blue combination. Some parts are almost black, and there are occasional section with lighter bits, but mostly it's just...dark. The picture is pretty accurate. The colors are more subtle than most Malabrigo combinations (remind me to show you pictures of the orange-purple-brown nightmare hiding in my stash sometime), and I think it will work really well for the CPH.

Have I sufficiently distracted you yet? Have you forgotten that I promised FO pictures? I didn't think so. Here's the thing: I love the rain. We need the rain. But the rain is seriously messing with my FO mojo these days. Every time there is someone here who can actually take a modeled shot (someone more than four feet tall, that is), it is grey and drizzling outside. As soon as the sun makes an appearance, I find myself completely alone in the house. So that FO picture will just have to wait until the weather and my family both cooperate.

In the meantime, I have a small favor to ask. I have a friend who is new to blogland--and new to knitting to boot--and she's just not feeling the love. We've all been there: new kid in town, everyone's already got their own group, no one says hello. So if you have a minute, stop by and make her feel welcome. It'll make her day!
Posted by Yarnhog at 3:55 PM

Yeah!!! I have this one all knitted up. Just needs to be seamed. The color looks lovely and I can't wait to see the FO. You are such a fast knitter!

That will be delicious! I wish I had gone a size and a half or so larger on mine.

Vaaa. Gotta love wacky yarn names. That color will be awesome for a CPH. It is a great sweater. I'm sorely tempted to knit it myself. Now I'm going to visit your friend and comment.

A hoodie like this is still on my to do list. But the sweater for Arwen is very nice too.

Mary Mother of G-d, a CPH in Vaa?? That is going to be your crowning glory!!