I have finished Tangerine Nightmare. Allow me to apologize in advance for the dreadful photos. It is 4:30 pm and pouring down rain, and the only person I could get to photograph it for me was my seven-year-old son. The photo session went like this: "Which button do I push? Oh, okay...wait, that's a little blurry. Um...I only got your butt in that one...I think you'll like this...oh, never mind. Let me take another one. Uh oh. I think I pushed the wrong button...should it be doing this?" In all fairness, he did as well as could possibly be expected, considering the lighting, the unfamiliar camera, and the fact that he is three feet shorter than I am. (He took the bottom picture below). I finally resorted to the notorious self-portrait in the mirror technique: 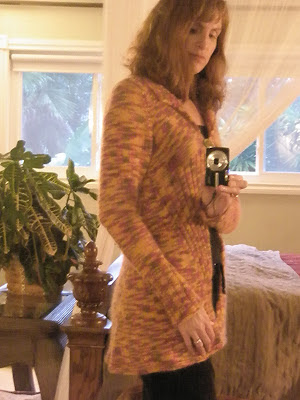 This started out as the Tilted Duster from the Fall 2007 Interweave Knits, except instead of heavy wool, I used light angora. As I've blogged before, I truly, deeply hate this colorway. It was an accident of internet yarn-buying. But I never actually intended to wear this project--it just doesn't strike me as all that wearable a style--so I didn't care about the color, and the yarn itself was a dream to knit. [For those who may wonder why I would make something I didn't want to wear, I was just intrigued by the construction of this particular pattern. Since I also didn't want to wear the yarn, it seemed a match made in heaven.] 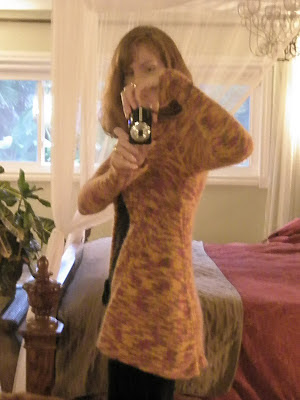 As I worked, though, I decided it was quite a shame that such a lovely yarn (fiber, not color) would never be worn, and I started thinking about ways to make this sweater more useful to me. First I lengthened the body a bit. Then I made wider sleeves with a slightly bell cuff. And then I changed the asymmetrical buttoned collar to a symmetrical fold-down collar. I have this little problem with asymmetry. I can't deal with it. I could never have worn the sweater with the original collar. When I sewed in the sleeves this afternoon and tried it on, I was very pleasantly surprised. Except for the color, it is a wonderful garment. It weighs practically nothing and is very warm and soft. 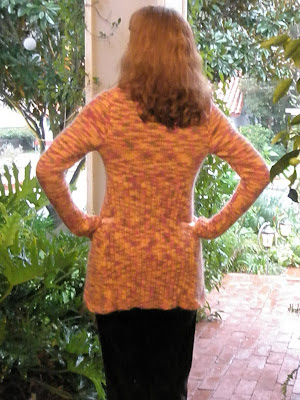 My final change to make this wearable will be to dye it black. I know some of you out there are gasping in horror, and I have to admit I have some small qualms, especially since I haven't tried dyeing a finished sweater before, but really--how hard could it be? Never mind. I don't want to know.
Posted by Yarnhog at 5:03 PM

Now I'm not a big fan of the orange/tangerine color family myself but I have to say- given what I see in the pictures- it looks good on you. The design is great and perfectly suited and I think with some black underneath it to settle it down, it looks good.

The kid's a natural photgrapher!

I like the mods you made. I probably wouldn't wear the color either. Can't wait to see how the dye job will turn out!

You know what, it's not half as bad as you might think it is. I looks absolutely wearable to me and the pooling isn't bad either. It's a keeper in which ever form you might prefer it.

dye it! The sweater looks great on you!

I love your modifications! I can't wait to see how it looks once you get the dye job done! :)

Absolutely. Dye it. It's a wonderful sweater that fits you perfectly.

Love your modifications. I, too, can not abide asymetrical knits. Or asymetrical anything, especially the 1980s asymetrical haircut a la Flock of Seagulls!

I thought it looked familiar and I think I may bug you for more details when I knit it so I can get your modifications which make it a more figure flattering shape. What a beautiful knit on you. I really hope you wear it looks amazing on you.

I found you through ravely. I absolutely LOVE your modification! I just started this sweater, but I would rather it look more like yours than the asymetrical bit.

I'd love to know how you did it!

Saw this on Ravelry and wanted to see the original post. I love the new color and I really love the mods you did. the collar is the only thing (plus about 40 items on my to-knit list) keeping me from attempting this sweater. I think I may move it up the list and try a different collar.

Ditto on the collar. Can you share your mods on the collar? I have the perfect yarn and would love to make this.
jamaicamom@comcast.net

I love the style of yours after the mods. It is so much more flattering. I would never have considered making this when I rec'd my IK magazine but if you ever share your changes to the pattern I will definitely run out and buy the yarn to make it. I guess it was also the asymmetrical lines that bothtered me also on the original. But I LOVE yours.
cheryli@valornet.com