Get 'Em While They're Young

You know what they say: if you want to convert people, you've got to get 'em while they're young. It's not a coincidence that cult members and soldiers are recruited from high schools. You stand a much better chance of permanently affecting how people think if you start training them before they've had a chance to form their own opinions. Teaching your own children is a good start, but if you really want to have an impact, you've got to go after them in groups.

I have done my duty in the name of fiber and begun recruiting the next generation of fiberheads: 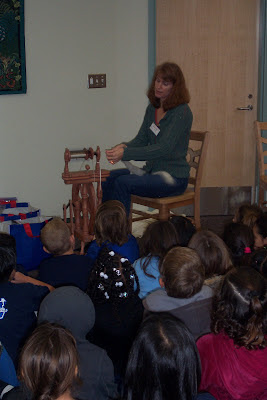 Here I am, demonstrating the fine art of spinning. This is after we talked about fiber (cotton, flax, wool, cashmere, mohair, llama, alpaca, silk...), examined unwashed fleece, petted clean fleece, and practiced carding. See the attentive little heads? That's not all of them. I had about 100 kids in two groups. 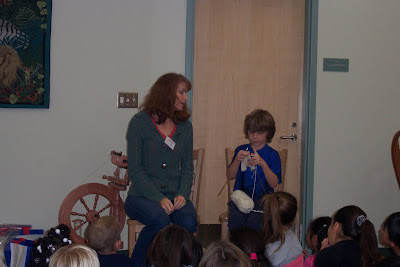 My son was in one of the groups, so I had him demonstrate knitting. The long needles--which he's never tried before--didn't stump him for long. He just tucked one under his arm and started clicking away. He was a big hit. Not quite as big as the ball-winder and swift, though, which got a spontaneous round of applause when the child doing the winding got to the end of the skein and the umbrella swift demonstrated how it got its name by flying open to its widest diameter. 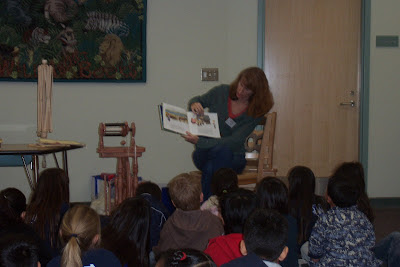 Although we all know it's not as wonderful as knitting, I also demonstrated weaving on a tiny child's loom, and then read a lovely book called "How a Shirt Grew in the Field," which is an old Russian story about how flax is grown and processed and spun and woven and then sewn into a shirt for a little boy. The kids seemed really interested.

I'm not entirely sure how the whole performance went, since I was pretty busy talking and carding and spinning and knitting and and weaving and reading, but I think it went reasonably well. The kids seemed attentive and didn't wiggle too much, and they especially liked my swatches, which I passed around, and the unwashed wool, which they all agreed smelled "like the zoo."

There were a few hiccups. My first 45-minute presentation ran a little long, if you can imagine such a thing, so I had to trim my second one a bit. I forgot to mention a few things I meant to mention, and I couldn't have as many volunteers for my second talk, since I was running short on time. Passing things around was a little disruptive in both sessions, which I anticipated, but my husband (who came along for moral support) says the samples were the most interesting part, so I'm not sure how I could improve on that. All in all, I think it was a worthwhile demonstration, I was able to tie it in well with the current ancestry unit, and--most importantly--I am still in solid form, and not, as I had feared, reduced to a little puddle of shivering goo on the library floor.
Posted by Yarnhog at 7:16 PM

Good for you for stepping out of your comfort zone to further the fiber cause! If I was a little more knowledgeable about it myself I would do it for my son's class. Maybe by the time he's in 2nd or 3rd grade I'll know more. Now I know where to come for lesson plans. :)

Awww good for you. Speaking from past experience at the head of classroom where I use to spend my life....ya done good! You'll never know how much the teachers appreciated what you did, not to mention the fact that you did so well. The only problem now is that you'll have to go back you know. Once a teacher finds a good "layperson" we have a tendency to latch onto them and nearly kill them with demo requests. You should be expecting a call from the upper grades soon. :o) Kudos for keeping 50 second graders from tumbling into chaos...not an easy thing to do!

Passing around samples is disruptive to the flow no matter what the age of the participants--but the more buzz and chatter, the more you know they are enjoying the experience and engaged with the material...it's the silent, fast handing around of materials which is to be dreaded...

You did it! And by the sound of it, you did a great job! I'm thinking you should relax with a nice game of Spider Solitaire! :)

That is AWESOME- and slightly inspiring- as in- "wait a minute- I don't have kids but I could do that at my school." Someone just slap me in the head RIGHT NOW.

Seriously, it sounds like you were really engaging- not an easy task at an elementary school.

Awesome!! I am impressed by anyone who can hold the attention of 50 2nd graders not once, but twice in the same day. Seriously impressed!

See, I knew you could do it. I would have not been able to come up that much intersting stuff and would have had to do the knitting demonstration myself. Nice job, now just watch out that they don't sucker you in and make you a "regular" for this sort of thing.

I'm happy that it went so well. I totally agree- get 'em while they are young. lol

How about a repeat performance for a private audience of one very attentive adult who really wants to learn. Your #1 student is ready to sign-up for a class.

Good work! I think you would have known if it didn't go well, you would have been hit by a spit ball or something.
Bet a lot of kids went home and asked their parents how to knit!!

You look very confident in those pictures - the conssumate fibre specialist! Congratulations! You get a gold star!

Great job! Even more than my wheel, the swift & ball winder is always a crowd pleaser with kids. My son loves to wind yarn!

You look like such a natural up there in front of the kidlets! Glad it went well...

I've brought my wheel into school and done some demos. I'm always amazed by how well the kids respond! It's really fun and little kids are really a wonderful audience. They are thrilled by anything new! But it sounds like your presentation went exceptionally smoothly!

Congrats on doing so well! My guess is that you will be getting another call soon. Brace yourself!

Congrats! No goo! I wish that there was a job that was along those lines that was full time and paid benefits. I'd do demos all day long!

So proud of you! Who knows, you may just have planted seeds that will grow into some great fiber artists of the next generation!
Nicely done.

Congratulations! Kids can be pretty hard to impress, and they don't even try to fake it when they are not interested so it sounds like you were a hit!