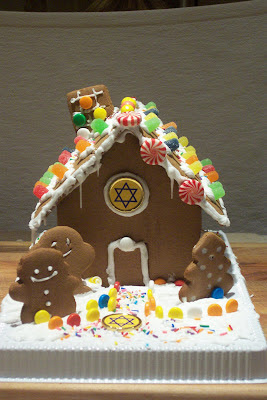 This is the gingerbread house my seven-year-old decorated. The chocolate Hannukah coins were his own addition to the pre-packaged Christmas candy. It is wholly appropriate to our unusual family. A few years ago, I wrote the following for the kids' school newspaper. It is as true now as the day I wrote it, and in the spirit of the season I want to share it with you.

The holidays are an interesting time of year at my house. Our beloved menorah holds pride of place on the mantel, just above the Christmas stockings hanging from the hooks that spell out “PEACE.” We light the Hannukah candles while Bing Crosby sings “Rudolph the Red-Nosed Reindeer” on our stereo. We play dreidel in front of the Christmas tree. One year, on one particularly odd day, we attended a post-Ramadan party celebrating my cousin’s return from the Haj (the pilgrimage to Mecca that every devout Muslim is supposed to make at least once in a lifetime) after attending a neighbor’s Christmas party and before lighting the Hannukah candles.

To say my children are confused would be a vast understatement. My 3-year-old is convinced that Moses and Santa Claus are the same person. My 6-year-old thinks that we light the Hannukah candles so that Santa will be able to see when he comes down the chimney. Despite my many, long-winded explanations of the differences between the various religions devoutly practiced by the members of my large and complicated family, both of my children remain blissfully unaware that it is inappropriate to wish their Jewish uncle a Merry Christmas, or to invite their Muslim cousins to light the Hannukah candles.

They also remain unaware that, in most parts of the world, their very existence would be impossible. They are the children of a Polish/Russian Jewish father, and a mother who is equal parts Palestinian Muslim and German Catholic crossed with English Protestant. They are the grandchildren and great-grandchildren of ancient and violent enemies. They are a unique product of the American Experiment.

In my weaker—or more exhausted—moments, I sometimes wish I could offer them a simple, traditional belief system. I wish I could just tell them, “This is who we are. This is what we believe.” But in my better moments, I realize that this way of life offers them something much more precious. They are learning, firsthand, that, notwithstanding the acts of governments and fanatics, every culture, every religion, every holiday, is a celebration of life and love and family. They are learning tolerance. And my one wish for them at this time of year—my wish for all of us—is the one spelled out on my mantel: Peace.

Rock on Suzanne, what a great piece of writing, it almost made me cry. Three cheers for complicated religious traditions!:)

Well said! It's all good! The more complicated and combined the religious traditions, the merrier.

I always thought if everybody was 'everything' maybe we'd all get along.

Wonderful and interesting! Your ancestry is fascinating!

I was just thinking about this holiday stuff the other day... While we are Christians who celebrate a traditional Christmas, I recognize that there are many holidays being celebrated this time of year and many non-Christians who enjoy celebrating the traditions of Christmas. I have no problem with this... let's face it, lights, trees and Santa Claus don't have much to do with the religious reasons for celebrating anyway, in fact they are more of a distraction (but that's another topic altogether).

I have no objections to hearing "Happy Holidays" instead of "Merry Christmas". I think we should all just unite in a season of peace and joy celebrated in our own personal ways... and stop stealing parking spaces at the mall.

Have you read the Life of Pi where Pi decides to be Muslim, Christian and Jewish? It's a most excellent passage in the book.

Stretching it a little, the Gingerbread in the back left sort of looks like the Buddha.

Mom was Jewish, Dad was confused but from an evangelical background.

Our first Christmas tree came under the guise of "Don't tell Grandma." Not nearly as ecumenical as one might hope. More a lesson in cultural and commercial assimilation than religious diversity.

Sounds like you've done it the right way and hooray for that.

What a beautiful piece of writing. Thank you.

Touching, lovely, funny and well-stated. I also sometimes look at various ethnic cultures and wish I had some more "set" traditions to enjoy. But then I realize the diverse and conjumbled traditions I was exposed to made me a tolerant, curious and open-minded adult.

Your kids sound like they are happy, healthy and involved, and will have many happy memories, as well as being open-minded and big-hearted, thanks to you!

What a beautiful post! Wishing you and your family a season filled with joy, love and peace.

Well said! Thank you for sharing. If only we all could be this understanding and including...

All I can say is Amen to that. Beautifully said. Thank you for sharing it.

Happy Hannukah! and Merry Christmas! That was a wonderful bit of prose you wrote. Thanks for sharing it.

What a lovely article. My sentiments exactly. Celebrate in any and all ways in a spirit of peace and tolerance.

Made me cry at 8am (EST). Could not post a comment because I lost my connection. What an awesome example of how it ought to be.
I pray for peace.

You are incredibly eloquent. I am speechless and teary and, right at the moment, wishing for some of your facility with words.

Peace to you and your family. :)

What a beautiful post! Thanks for sharing this- you're a talented writer and it's a pleasure to be able to entertain your thoughts for a few moments.