Three of These Things Belong Together...

Does anyone else remember the matching game from Sesame Street where they would sing the song "Three of these things belong together/ three of these things are kind of the same/ but one of these things is doing its own thing/now it's time to play our game..."? I have wasted a lot of brain space on random memories and am now paying the price. [Following is a spinning post. Those interested in only the post-yarn-production aspects of knitting may feel free to move along, with no hard feelings.]

Here's my version of the game: 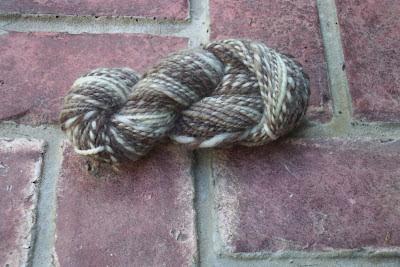 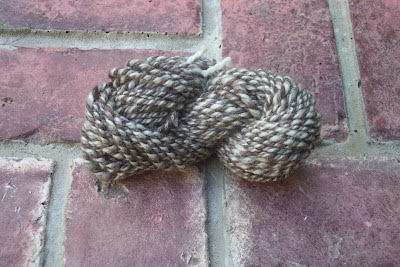 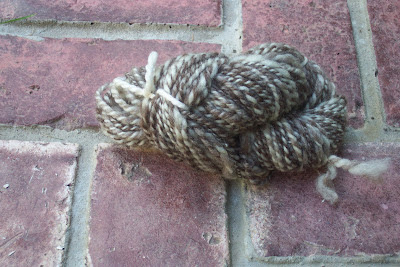 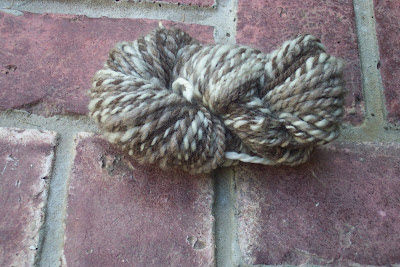 Which of these yarns is not like the others?

Okay, okay. No fair. It's clearly a trick question, since none of them is really like the others. I'm just not that good at spinning yet. These four skeins represent my four attempts at designing a yarn for my First Handspun Sweater, using three different shades of undyed BFL (which is a type of wool that I cannot spell, and so I am using the abbreviation, which has the added advantage of making me look like a cool insider with superior fiber knowledge. I call it this in person, too, since I also do not know how to pronounce the real name. Shhhh.)

The first skein was two-ply with random color changes in each ply. It was a little finer than the worsted weight I was going for, and I wasn't sure about the random color changes, so for the second skein, I spun each ply as a single color, a little thicker, and then made three-ply. Too thick, and I don't like the evenness of the colors. Very barber pole. Also, I think I plied a bit too tightly (if that's the right word) and the yarn is a little stiff.

For the third attempt, I decided to go back to two-ply, spin the singles a little thicker than for skein one, and make regular color changes for each ply, but ply them so the colors did not line up so that I would get subtle stripes. It's okay, but the color changes are still too regular. So for skein four, I went back to the random color changes and two-ply construction I did for skein one. It's okay, but some of the singles became a little puffy in the final wash. I must have spun them a little too thick. Sigh. Just call me Goldilocks.

Would it violate some spinning or knitting rule for me to just use all of them and call the finished result "handcrafted"?
Posted by Yarnhog at 9:14 AM

I would use them all. Thinner stuff for cuffs, collar, bottom edge and use the thicker for the body. It looks great to me! I so remember that Sesame Str skit. I also remember Electric Company and how they'd start off the show with some lady shouting "Hey you GUUUUYYYSS!!" at the top of her lungs. I have way too many TV things like cluttering my brain, including the theme song from Magilla Gorilla.

I am knitting with Noro Silk Garden as I catch up on blogs this morning. Your yarn is no more nor less uneven nor random than the high-priced spread. (See, I have old TV stuff in my head, too!) Use all four of them and call it handcrafted. If you were to sell the FO you could charge a premium price b/c of that label.

I think you should use them all too. Varying yarn textures can make a fabulous looking sweater! Say you created the variety of yarns for a work of fiber art.

Use all four! You could always alternate between skeins if you want to even out the overall look.

I agree, I am all for using the "handcrafted" umbrella to make up for imperfection. If it were perfect a machine could have made it and it wouldn't have your touch. I like the idea of using the thin stuff for cuffs and thick stuff for the body. And that BFL is pronounced blue faced "lester" we learned that at the blacksheep gathering in oregon this summer. the whole crowd did a repeat after me, because nobody knew how to say it!

a timely spinning post in my world. Holy crap I'm so excited.

You are ambitious! You might want to condier a slightly smaller project with your first handspun (like a scarf or hat) until you get the feel of how it knits up. It helps you figure out the issues it may have so you can correct them by the time you actually knit the sweater. As an added incentive, you will also have a really cool accessory to go with the sweater when you get it knitted. Congrats on your first skeins. I like to colors. But shouldn't you be working on Icarus?

Ha! you are cracking me up with the
BFL lingo.....certainly sounds like you have the inside knowledge!

I say use them all too! I think it would be funky/cool....and definitely an original! Love the idea!

I think a chuncky arty rustic sweater or hat would be cool looking, isn't that whats 'in' right now ? Not that I would know, I'm still in cir,2001...I think it would be interesting to knit.

For those of us who are not I think we are just impressed that you can do what we can only imagine doing (or imagine not doing well). Knit away. Ahh Sesame Street the good old days.

For those of us who are not I think we are just impressed that you can do what we can only imagine doing (or imagine not doing well). Knit away. Ahh Sesame Street the good old days.

I think you should use them all. :)