Things that do not mix with casting on for a cabled sweater:

1. A seven-year-old who desperately wants to shop online for the exact Storm Trooper costume he saw in the store that had it in every size except his ("NO, Mom! The one with battle damage! And gloves. And the helmet that's closed in the back, not the one with the mask!").

2. A ten-year-old who is adamant--and vocal--in his unwillingness to accept that the weekend's schedule will not allow for a sleepover, the injustice of his friend not being home when he wants to ride bikes, and the fact that he has a little brother who is not going to be sent off to boarding school anytime soon.

3. A four-pound corned beef slowly coming to a boil in a giant pot of water on the stove. It turns out, when you have the burner on high, you have to actually pay attention to whether the water is approaching the boiling point. Or you can just wait for several gallons of greasy water to boil over onto the stove, the counter, the floor, the dog...

4. A visiting uncle who believes it is his mission in life to encourage rambunctious boys to chase, wrestle, tear apart the house, and generally do their best to ensure that mom does not get five consecutive seconds without someone screaming as though their legs have just been torn off.

5. A large, hairy, drooly dog who hasn't been walked in godknowshowlong who has decided to express her displeasure with the lack of attention by stealing stuffed animals off the kids' beds and racing through the house with various members of the family giving chase and hollering at the tops of their lungs.

6. A husband who is convinced that it is a great idea to cancel all four phones, the high speed computer line, and the cable tv to try out some shady deal the phone company is touting (the same phone company that just billed us nearly $400 for a single month of basic phone service because it can never get its act straight) and is determined to convince his loving wife that this is a good idea while she is counting the same 114 stitches for the eleventybazillionth time. 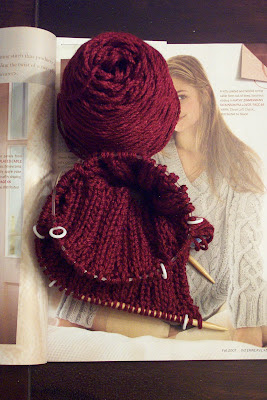 If I add up the total number of stitches I have cast on and knitted today, I am about halfway through this one.
Posted by Yarnhog at 7:13 PM

Too funny. What yarn are you using? I was drooling a bit over that sweater myself.

kmkat: Since I finished Vino, it was this or Icarus! Considering my history with Icarus, I think this was the lesser of the evils.

You are so funny!

Please know that all of the factors you describe above are why COCKTAILS were invented!!

Yes, but tomorrow you will be sending those children off to school.

Thanks for the grumperina cabling info- I'll give her way a try today. So far CPH is much easier than TY I'm at the resolution point where it will be called Mangled Yoke and a lesson learned. I decided to do CPH on straight needles. I think I'll be able to muster the patience required for seeming now that I know what to expect.

Holy crap! My advice: RUN AWAY!! Or knit something plain & simple like kmkat suggests. I feel for you. That's too much chaos all at once.

What kind of mother are you? Buying the storm tropper costume without battle damage, I mean really!!!
I hate the counting of stitches.

Change #2 to a 13-year-old girl and you've got me and my daughter. heehee

Hope things get better and you can have some quiet time.

Lock yourself in the bathroom, fill the bathtub and tell everyone you are going to have a nice, long, hot bath. Instead, grab your knitting and try to finish the cast on without further interruption. Desperate times call for desparate measures!

So, your doing the death by cables sweater,eh? Brave or very foolish women. Got jelly beans?

Hey, Uber--I'm going to have to rename this one "Death By Cables" in your honor!

I am not sure what's worse - the relentless uncle, the corned beef, or the sweater agony. We used to have a friend who visited and riled up the kids under the heading of "boys will be boys" and "it's good for them." Interestingly after he had kids of his own?? Changed his mind a bit.

best of luck. looks like it will be a lovely sweater once life calms down and lets you knit more than you unknit. happy knitting!

I'm with Ms. QHK - time to break out the big guns. BTW, reason #6 is why I handle the bills in our house. No more funny business, mister. Good luck, busy lady.

Oh for the good old days when you could just tell the whole lot of them, "Go Play in the Street". Most boys seem to believe it is their mission in life to make as much noise as possible at the most inopportune moment. Some boys never grow out of it… they become favorite Uncles. I use the safety pin style stich holders when I have to do counting (otherwise my brain might explode) pop a pin in every 10 stitches as you go. I do the same thing with rows, every 10th row or so gets a pin or every row that has a major change. My knitting looks weird but I stay semi-sane.

Oh yeah, I'd be totally ready to move out, somewhere by myself!

I don't think corned beef and cables should ever, EVER mix. My vote is for dishcloths!

This is the exact reason I never cast on anything requiring more than 50 stitches. :—)