So, remember how I did that new provisional cast on for Grecian Plaits? The one I tried six times before I got it right? I should have done it seven times. I finished the yoke last night and carefully untied the knot to pull out the waste yarn, and all hell broke loose. I tried to pick up the stitches one at a time, but got hopelessly tangled. As nearly as I can tell, I did something wrong in the cast on. (Gee, really? How did you come to that brilliant conclusion? Could it be the wadded mess that was your cast on row?)

Then I thought I'd just pull out all the waste yarn and pick up the hanging stitches. (This is the point in a scary movie where you'd scream "No! Go back!" at the screen.) This was an even worse idea than it sounds, because the very first row after the cast on is cabled, which means the cast on stitches were all twisted up. I struggled with this mess for over an hour, quietly swearing and taking deep breaths, while the stitches slowly unraveled from the cast on row up, until I was finally forced to admit defeat. I eventually just picked up stitches wherever I could until I had the right number and everything seemed to be secured. I then grafted the ends of the yoke together. Here's the result: 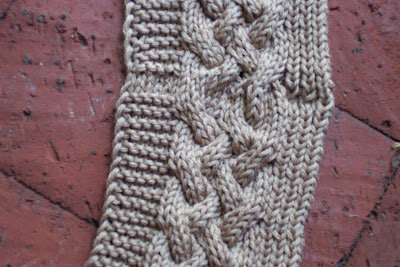 I'm not pleased. Some of this is clearly my fault (see above). But some of it is not. The cables don't seem to match up, even though I did the proper number of rows, and I don't at all like the grafting in the garter stitch section. I am guessing there must be a technique for grafting garter stitch, which I obviously don't know. I think I'd have been better off just casting on normally and sewing the ends together. I considered taking out the grafting and redoing it, but I'm afraid I'd never be able to find the picked up stitches again. The seam will be on top of my left shoulder. Since I am quite tall, I am guessing no one will ever see it, unless they're sitting in a tree while I stand underneath. What do you think: is it worth trying to do over, or should I just file it under "hand-made charm" and pretend it doesn't matter?
Posted by Yarnhog at 12:57 PM

Aarrghh. I am so mad at that provisional cast-on and grafting. I'm sure you could get away with it but if it were me I know that after everyone complimented me on my beautiful sweater I would feel automatically compelled to point out the mistake.

If you can keep your lips sealed (you may have more success at that than I) I wouldn't change a thing. If you're a blabbermouth, I'd at least try to re-graft after a search on grafting garter stitch.

I hate myself when I apologize for things other people can't even begin to think about doing and yet...

Um, I think the "I'm tall so no one will see it" is a rationalization. Do you ever sit in a chair? Lean over? I'm afraid your reasoning is faulty.

That said, I also must say that I'm not sure I would fix it. But I'm lazy that way.

FWIW, here is my $0.02. Earlier this year, I took a lace knitting workshop from Galina Khmeleva, and thoroughly enjoyed it. I know we aren't dealing with lace here, but basically what Galina said about mistakes is that what everyone who sees your handknitted garment will notice is how pretty it looks on you. As far as how you will feel wearing your sweater knowing that the mistake is there, well, it may bug you too much not to try and fix it. But I also wanted to put out there that knitting is supposed to be fun and relaxing. We already do way too much stuff in our lives that is neither. Before I start on the notion that everything we make must have at least one flaw to appease the Goddess, I'll stop. I'm a total enabler, in case you haven't noticed. Sorry for sucking up so much bandwidth. ;)

Hey Gal....I got you beat on height (6'3) and I would redo it.. simply because you will want to sit down sometimes...or bend over or whatever. When I have to graft cables together I push double pointed needles through the stitches before I unravel. It's a bitch to have to redo but just repeat "I love to knit" as a mantra until it has been completed.

Ugh. I hate it when stuff like this happens! I've had trouble with the provisional cast on before too.

I am pretty sure I have seen specific grafting instructions for garter stitch, but I can't remember where. I have never had do use them yet myself. As for doing over or not, only you can decide if you can live with it the way it is or not.

page 323, Margaret Radcliffe's knitting answer book, also. and somewhere I saw kitchener for a series of other circumstances, but I am dipped if I can remember where now.

I'm the same as 5element. I'll give one mistake to the knitting Goddess but once I hit the second one or know that there will inevitably be a second one, it's rip city for me.

I was pondering and wondered if you couldn't do a 3-needle bind of in garter stitch (assuming you'd want to look for those stitches again.

I'd leave it alone. Only you and an eagle-eyed knitter would notice it once the whole thing is put together. If you undo it, the potential for disaster is too great and it sounds like you went through enough hell alteady.

If you are truly worried about others seeing it, I wouldn't bother fixing because they probably never will. However....
If it's bugging YOU, definitely fix it or I fear you will avoid wearing it!

I've got my own provisional cast-on feelings of ill will---no one told me the first time I did it that if I crochet the cast-on left-handed and knit right-handed, every single one of those rotten little stitches would be locked on there! Ugh. Let's just say that project ended up DOA....

No one else will notice. It would bug me too much to leave it. I am guessing you are the same. But I am not going to tell you what you should do. It is really pretty.

I think I'd redo too. Maybe you can rip back both ends, then reknit and sew together. If it was a bigger piece i probably wouldn't fix it, but with something that narrow, it probably would only take an hour or two, and you'll feel so much better about it! And, maybe you'll learn a new kitchener graft as well.