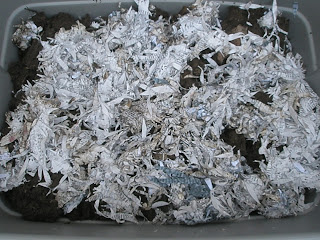 If you guessed "worm bin," you are correct!  (If you guessed "Yarnhog's latest wild hare" you can also give yourself full credit.)  If, like Kat, you are watching my ongoing dog-and-chicken show with bewilderment, I can assure you I have not gone country, so to speak.  I prefer to think of it all as a great experiment in (sub)urban micro-farming.

I've tried traditional composting before, but with limited success.  I don't have a lot of space for piles of compost, and I don't have deciduous trees for leaves, nor do I collect my lawn clippings.  Mostly what I have is kitchen scraps, which are generally popular with the local rat population, but haven't resulted in good finished compost.  So I decided to set up a worm bin to compost my kitchen scraps, stop feeding my garbage disposal, and get great fertilizer for my vegetable garden. 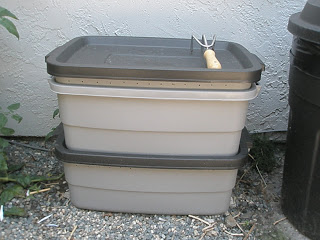 I originally planned to buy a worm compost bin, but they are stupidly expensive, so I made my own.  I used three 10-gallon Rubbermaid tubs, but you could use two, or even one.  My design has a closed bottom bin to collect "worm tea" (I think that's a polite term for "worm piss"), and two working bins, so that I can use the worms' natural migration from the lower bin to the upper to harvest the castings with a minimum of actual hand-to-worm contact.  Because while I love the idea of worms, I am less enamored of the actual worms.  Although you can't see them in the picture, I drilled holes in the bottoms of the working bins and all around the top edges.  If you want to make your own bin, there are great instructions here.

LOL I love watching your adventures in wildlife. :) When I was teaching a couple of us had worm compost bins in our classrooms. Aside from the food we got from the cafeteria we also gave the worms a little vitamin supplement. Once a week or so we'd get the bin a quick spray of "vitamin juice" 1 tablespoon of Geritol diluted with 12 oz of water. I have since heard that adding a tablespoon of Milk of Magnesia could also be added to the water. Our worms led happy and healthy lives and the compost did wonders for our school garden.

To be honest, I did not guess worm bin. Just so you know.

Having been an unsuccessful worm composter myself, I knew what that was right away. (My mistake was not to mince the vegetable matter before adding it to the compost bin. Apparently worms do not have big mouths full of incisors and molars. Who knew?)

LOL! You are one brave soul! Hope there are no fanatic fisherman in the family....there go your worms! Good luck with the "farm".