I suppose it wasn't very fair to leave you hanging with that picture of the two birds, was it?

As many of you surmised, I did get Peanut a friend. (And no, it's not some mutant freak of a baby that hatched as a full-grown cockatiel. Of the five eggs she laid, only one was fertile, and the egg died before hatching.) 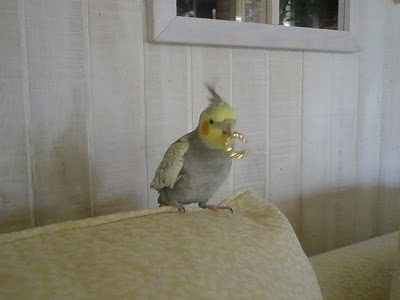 The new friend is Daisy. S/he (and there is considerable doubt on this point) was living in a very nice home with way too many other birds. Like about 50. Super nice family, but Mom got a little out of control (careful--no comments) and acquired parakeets and finches that won't stop breeding. At one point, the family had three cockatiels, but they rehomed the other two, and poor Daisy was left all alone as the only cockatiel, and the only indoor bird. No one was home all day and she was terribly lonely. So I brought her home to live with Peanut. 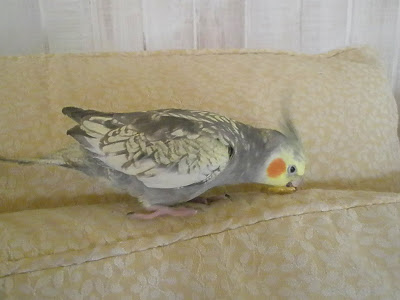 I am a life-long dog person, and I would never expect a dog to be like any other dog, so I can't imagine why I figured all cockatiels would be pretty much the same. They're not. At all. Daisy is so different from Peanut, it's like she's another species entirely. Where Peanut is calm and quiet and would happily spend all day napping on my shoulder, Daisy sings and whistles and chatters, hollers for attention, scampers all over the house (and me), plays with toys, and never stops moving. We have an ongoing battle over ownership of my earrings, which she steals right out of my ears, and my computer keyboard--she loves to pull the keys off and run away with them. 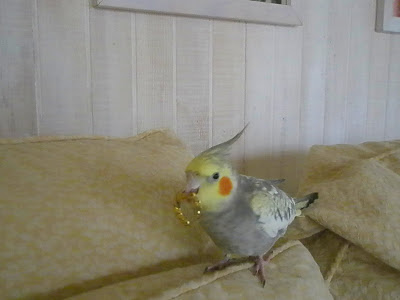 Where Peanut adores me and attacks everyone else, Daisy loves everyone and is indiscriminate in her favors, which include lip nibbling and attempts to regurgitate for her loved ones (her loved one--namely the KH--is horrified by this normal avian practice and mildly offended at the thought that the bird wants to pick out curtains with him). She is just a bundle of energy and entertainment in a tiny package. Well, perhaps not so tiny; she's at least 50% larger than Peanut. 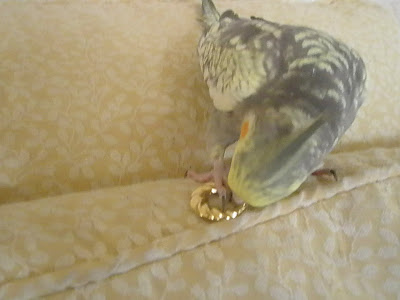 Watching Daisy with Peanut is probably the most entertaining part. Daisy immediately decided she wanted to be BFFs with Peanut and has been expending a tremendous amount of energy to make that happen. Peanut, on the other hand, wants nothing to do with it. When Daisy passes the invisible demarcation line that defines Peanut's personal space, Peanut threatens to bite her. But Daisy is a persistent bird, and a devious one. I love watching her sneak up on Peanut, totally casual, looking the other way, "Nothing to see here, folks...just taking a walk...nothing to worry about..." The funny part is, it works! Initially, Daisy couldn't get closer than a foot away. Now she can get within about two inches before Peanut cusses at her and takes off in the other direction.

As to the gender...we have strong suspicions that Daisy is actually male, as did the previous owners. With some of the cockatiel color mutations, it is not possible to visually sex the animal, so only a DNA test (or something obvious, like egg-laying) can determine gender. With other colors, there is clear gender dimorphism. In Daisy's case, it is not clear-cut. Her feather patterning is more likely female, but her behavior is much more consistent with being male. She's still very young, which complicates sexing. I wanted a female, and after looking at pictures of Daisy, I figured she was likely female. Now that I've watched her for a while, I'm pretty sure she's male. So we're kind of in limbo here. We're still calling her Daisy, but we are using the gender pronouns randomly. It's all very confusing. The boys want to give Daisy a male name, but since she already knows her name, I think this would be a mistake. And heck, if you can have a boy named Sue, why not a male bird named Daisy?
Posted by Yarnhog at 6:45 PM

I'm loving to read about your birds!

I agree that Daisy sounds like a male, in terms of behavior. Casey, my male cockatiel, behaves just like Daisy. You could try Davey for a name - sounds similar. It sounds like Daisy is trying to get intimate with Peanut. There are you-tube videos of cockatiels "getting it on." The male's tale swishes back and forth, from side to side, at an impressive rate. My Casey would do this with my sister! She wears rings that he likes to chew on, and then.... TMI, I know! Thanks for posting about Daisy. :o)

Doozy would be another good switch-over name. And very gender neutral.

I'm just waiting for pictures of an ark under construction in the backyard. You're getting the two-by-two part down really well! :-) Seriously, love all the critters....we would have more but renting does limit you somewhat. Our day will come! Enjoy the birdies, sounds like you have plenty of entertainment in the house now!

My cockatiel used to steal my earrings too. Thanks for the memory. :-) Love the visual of Daisy stealing the keyboard keys and running away with them, hahaha. You could lengthen Daisy to Daisy Duke, and change to Duke if necessary... I like Doozy too.