My house remains a minor disaster area. In addition to the industrial de-humidifiers running night and day, we now have soggy drywall and broken tile adding to the ambiance, and a steady drip into a bucket that was not all that alarming until the restoration guys who came by last night advised us to shut off the water to the house to prevent the pipe from bursting while we were sleeping. We decided this was good advice and did as they said. The insurance company still hasn't told us whether they're paying for the damage, but at this point, it's almost moot. They will cover whatever damage is done in finding the problem, even if they later don't approve the claim, which means they have to pay to put everything back together. In this case, that means they essentially have to repair everything anyway.

And I have found a new way to distract myself from the chaos. I picked this up last night (craigslist, $120): 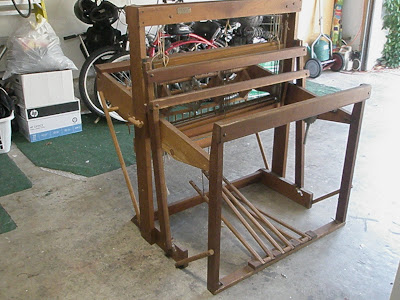 It is marked "Sabina folding loom," made by Loom Craft Studios, Wilmington, Ohio. It came folded up--nice, as it is only about 18 inches deep when folded, meaning it can be stored against a wall without taking up much room. With the aid of some photos printed off Ravelry and the help of my engineer-husband, I got it unfolded this morning. 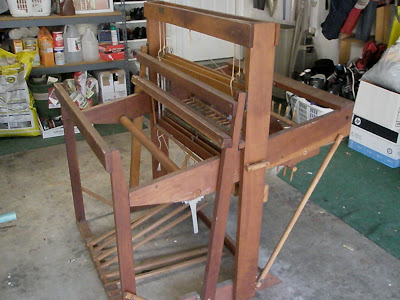 From the little information I could find online, these were made between 1939 and 1949. They came in at least three different sizes. Mine appears to have a 33" weaving width, judging from what I think are the reeds. 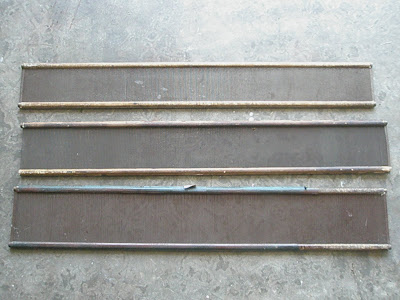 That would be these, I believe. If I'm wrong, someone please tell me. As you can see, there are three of them, and unless I am more confused than I think I am, these go into the beater bar to...uh...pack the weft together (I'm sure there's a technical term for that) as you weave. They are rusty, but don't appear rough or pitted, so I think I can clean them up and use them. 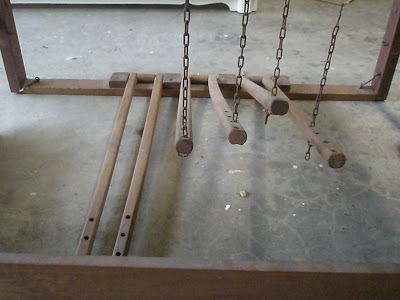 I think these are treadles (this is the back of the loom), and there are six of them, but two are missing the chains that attach them to the things they lift up and down. I think those are the heddles? (Can you tell I know nothing at all about weaving? I ordered a book but it won't be here for a couple of days.)

I mean these things: 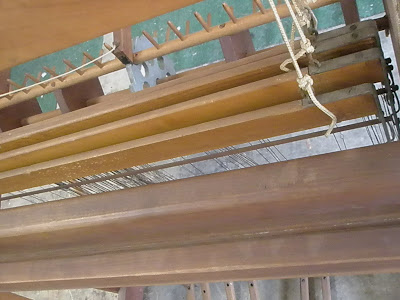 The ones with the cords attached on the right side of picture. They lift up when I push on the treadles. What I don't understand (well, among many other things) is why there are only four of them when there are six of the treadles. Anyone know? 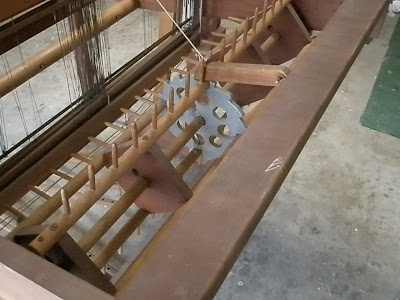 The loom appears to be complete, and seems to be in pretty good shape. There isn't anything broken and the wood is solid cherry and appears sound. The hardware is a bit rusty, but still functional. 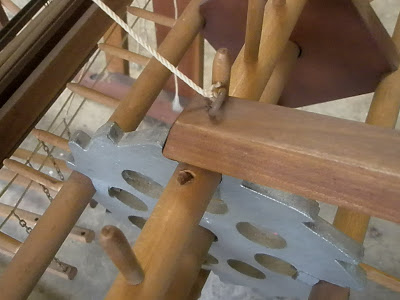 There is a broken peg on whatever this thing is, but it looks easy enough to replace; it's basically just a dowel with a rounded end. 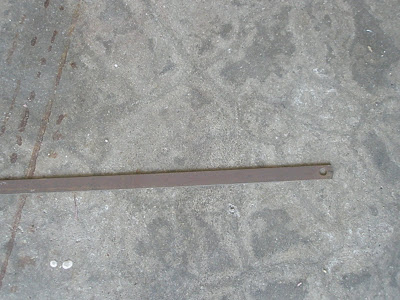 I'm a little concerned about this part. It came with the loom, but I don't know what it is or where it goes. It is the same length as the reeds, so I suspect it has something to do with them, but it is not obvious to me what it is for.

I'm not at all sure what I am going to do with this. It needs cleaning, which I'm sure I can handle. Beyond that, I'm pretty lost. I've tried to find a manual, but without success. I'm hoping the "Learning to Weave" book I bought will give me enough information that I can figure out how to use it. I do know some weavers in the area, so I have a back up plan in place, and an offer from one of them to come help me warp it the first time. She says that's a full-day operation.

Maybe I should have started with a lap loom.
Posted by Yarnhog at 12:10 PM

Weaving: a faster way to get fabric than knitting. Best of luck, I am a bit jealous.

Suzanne -- looks like a fairly decent loom for the price -- I don't see a bunch of rust. Needs some TLC, though. It should clean up nicely with some elbow grease and orange oil. That long wooden piece may be something that attaches to the front beam for tying on your warp to the front. You should go out to the Steam Engine Museum and look at some of the looms out there to figure out whether you have all the pieces to your loom. And . . . the reeds don't look all rusty. That's good, too! Good luck.

Major distraction is a must. No lap loom could give your brain the break it needs.not a clue on the details but I know that your brilliance will discover all in good time.

You're a wild woman. That looks absolutely fascinating. Can't wait to see what you can do with it once you get it all figured out!

ozessecNice loom! Looks to be in really great shape. Join the Weaving group at yahoo and they will have all the help and answers you need.

Oh Suzanne, I love how you so hesitantly embark on a new journey...

Each foot peddle hooks up to one or more of the heddles in different combinations. Example: the first peddle lifts up 1 and 4, second lifts up 2 and three, third lifts up 1 and3...

My guess is that you should have four heddles. My husband just bought me a used floor loom, and I'm trying to figure it all out. I'm looking forward to following your weaving journey.

There are 6 treadles for a 4-shaft loom because the patterns often call for 4 combinations of tie ups (as someone previously said, perhaps holding up shafts 1 and 2, and the next 1 and 3) or whatever. Then you may also need two treadles for "plain weave" which is a regular up-down weave. You would probably want to do that at the beginning and the end, at a minimum, to hold things together more firmly and give a nicer border to your pattern work. I generally do my plain weave tieups on shafts 1 and 6 (I think it's easier to have them on the outside).

There are also weaving classes at the UCSD craft center (I took weaving there)--it's a great place to learn, too, if that's closer for you than the Steam Engine Museum.

Good luck and have fun!

The extra rod the length of the reeds is the front tie-on for the warp to attach to the cloth beam in the front, where your fabric will roll onto as you weave.

where the missing peg in the back is on the warp beam, where you wind on the warp, then thread it through the heddles on the harnesses (the frames that rise when you step on the treadles)

the heddles are the wire or flat steel pieces hanging on the harnesses (the frames)...a warp thread goes through each one.

there are six treadles for the four harness loom because you can tie them up to the harnesses in different combinations if you want to do pattern weaves; a plain weave using all 4 harnesses is usually tied up with 1 and 3 harness on one treadle, 2 and 4 harness on another treadle...so you can do your plain weave using just 2 treadles. You can tie each harness to its own treadle if you want to lift them independently of each other, etc.

Have fun...great buy on a neat old loom if it is sturdy, wood still straight, especially the beater.