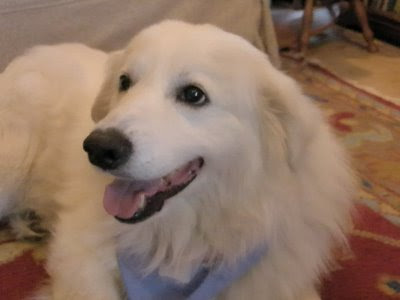 Those of you who have been visiting this blog for a while probably remember this day. It was the day Sam came to stay with us as a temporary foster dog. 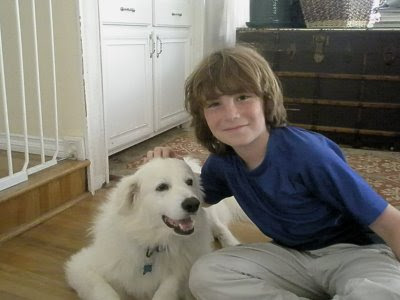 Rapidly followed by this day, when he became a permanent part of our family. 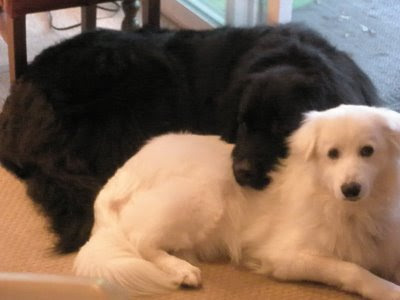 And he quickly became a beloved member of the pack. 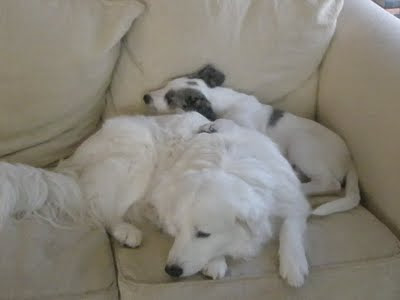 He was never the healthiest dog. He came to us with a crushed pelvis and mostly missing teeth, but he never seemed to notice. He was perfectly happy to hop around on three legs and gum his rawhides, and his tail may have wagged in a wacky circle, but he never stopped wagging it. 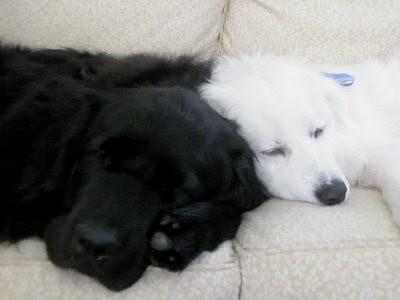 He was the dog everyone wanted on a sick day, or a sad day, or a sleepy day. 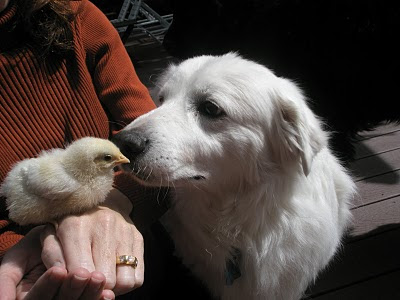 We always figured he'd make a great therapy dog, because just being around him made everyone feel better. 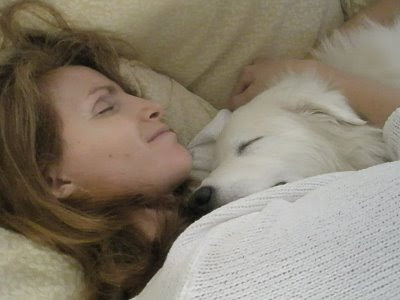 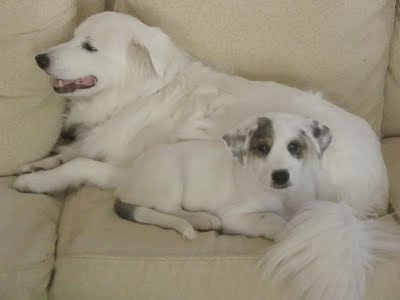 But the past few weeks, he'd been a little...off. And then something happened to his tongue that required surgery. We were never quite sure what it was. For a few days after that surgery, he seemed like his old perky self. And then he wasn't. He was tired. He lost weight. He wouldn't eat. And yesterday, all he wanted to do was put his head in my lap. Last night, his nose started bleeding and wouldn't stop. The KH took him to the emergency vet late last night and he confirmed our fears. Sam was bleeding internally and there was a large amount of fluid around his heart. I woke the kids and the other dogs and we all went to the vet in the middle of the night to say goodbye to one of our own. Everyone had the chance to pet him and talk to him and give him a last kiss, and through it all, Sam wagged his funny tail and seemed to smile at us all. Then I put my hand on his head and he closed his eyes, and a few seconds later, he was gone. Quietly. Peacefully. With his whole pack around. We didn't have him as long as we would have liked, but we loved him, and in the end, that's what mattered. 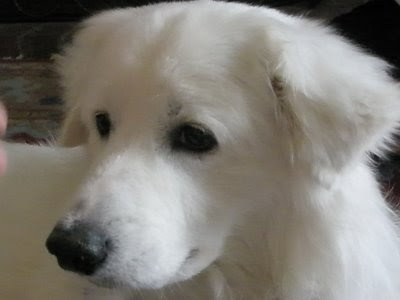 I'm so sorry for your family! Take care.

I'm so sorry to read about Sam. He certainly had a loving home. Take care.

So sorry about Sam, what a sweetie he was!

I'm so sorry to hear this! It's always so hard to loose a part of the family. I'm sure he knew how much he was loved.

Our neighbor lost my most favorite dog ever and liza's best friend, Katie, at the same time. I am so sad for you, it makes me feel a little better that Katie's got a great friend in Sam. I know they are making friends.

I am so sorry your Sam is gone but happy that you all had each other for the years you did.

We recently had a similar situation with one of our cats she came to us when she was 6 weeks old and back in Oct 2010 I noticed her eating habits had changed along with a few other habits, so off to the vet who then informed us that she had developed a heart condition and that they had also found a tumor in her mouth and there was nothing they could do for her. Since then we have been trying to make her life as easy as possible and making sure that she is not in pain etc. You have now faced the end result of what we are starting to face. Our hearts go out to you and your family and how your family handled it I hope we can learn from you. Hang in there

Sam quickly became a beloved member of a strong and loving family. His life and yours was the better because of that bond. I’m certain that he felt your love from day one and up to and beyond the end. We'll all miss him...

Love to you and your family. So sorry to hear about Sam.

I'm so sorry for you and your family. It's awful to lose a loved pet:(

Sending you and your family lots of hugs

What a beautiful story. I'm sorry about your loss.

I am so sorry for your loss. Sam's sweetness just leaped out of your blog posts. Especially love the photo of you & Sam snoozing. I remember when you got Sam and am so sad to see him go. Big hugs to you all.

I'm so sorry about Sam. Sending my love to you and yours!

This is so nicely written and summarizes beautifully why you all loved him and why you will miss him so much. I had tears in my eyes at the end! Take care!

So sorry to hear about Sam. Sending lots of hugs. Know what you are going through because we lost our Red, aka Digger Dog, the week of Christmas.

What a lovely animal. So sorry.

I'm so sorry for your lost. Know that I'm praying for your family. I loved reading about him. RIP Sam

I'm sorry for your loss. I cried when I read your post. I hope this poem brings you some comfort.

Just this side of heaven is a place called Rainbow Bridge.

When an animal dies that has been especially close to someone here, that pet goes to Rainbow Bridge.
There are meadows and hills for all of our special friends so they can run and play together.
There is plenty of food, water and sunshine, and our friends are warm and comfortable.

All the animals who had been ill and old are restored to health and vigor; those who were hurt or maimed are made whole and strong again, just as we remember them in our dreams of days and times gone by.
The animals are happy and content, except for one small thing; they each miss someone very special to them, who had to be left behind.

They all run and play together, but the day comes when one suddenly stops and looks into the distance. His bright eyes are intent; His eager body quivers. Suddenly he begins to run from the group, flying over the green grass, his legs carrying him faster and faster.

You have been spotted, and when you and your special friend finally meet, you cling together in joyous reunion, never to be parted again. The happy kisses rain upon your face; your hands again caress the beloved head, and you look once more into the trusting eyes of your pet, so long gone from your life but never absent from your heart.

Then you cross Rainbow Bridge together....

oh, I'm so sorry. What a beautiful eulogy you've written.

Much love to you and your family. Sam was a great dog and he had a good life because of you. He made your lives better too. I'm so sorry he left too soon.

What a beautiful tribute to your beloved Sam! I'm so sorry for your family's loss and the sadness you must all be feeling.

I'm so sorry! He was such a beautiful, sweet dog.

Condolences to your family. It's always hard to lose a pet, but what a joy to have had that wonderful connection with an animal.

I'm so sorry. I'm glad that you all got to say good bye to him and you were there for him when he died. So sad.

How lucky was Sam to have such a loving pack. Hugs to you all at this sad time. x

I am so sorry. That was a beautiful tribute, and the picture of you two napping & the accompanying comment were so sweet. He was lucky to be part of your pack.

Oh how sad. They take over your heart and then it is so hard to say goodbye.

Good that you said Good Bye to Sam as a pack. You allowed him his dignity to the end. He was such a wonderful addition to your family, and so hard to lose.

Wishing you good memories of Sam.

My deepest sympathy. Think of all the happiness your family gave Sam also. May he rest in peace.

How sad. At least he lived his last wth you lovely people.
xoxo

I'm glad your pack got a chance to say good-bye and give him a proper send off. Sending you a big hug!

I am so sorry for your loss. Sam sounds like he was a Good Dog. He could not have had a better pack.

Our Golden Retriever. Lucy, received a grim diagnosis in January. She was given weeks at most. But she is still here and we are thankful for every day. We want to keep her with us and let her live out her life in our company - the most important thing to her - unless we feel she is in pain.
I thought the description of your dog and interactions with your family and his passing was poignant and lovely and reflective of a true dog lover. They contribute so much to our lives.
Thanks for sharing. It helps to know there is someone else out there who is - as Anne of Green Gables would say - of "the race that knows Joseph" !!!

I'm so sorry for your family! What a sweetie he was!

So sorry for your loss, but so glad your family was blessed with such a sweet dog. Thinking of you and your family.