So I was knitting along happily on my new sweater and finished the body and hood, and then I hit a snag. Not a major snag, but one that required me to take a little break. Feeling the need for a little mindless knitting, I pulled out the Noro Log Cabin blanket that's been waiting patiently for a while. If you recall--as I did--I had finished all the squares and assembled them into strips. No mean feat, that, since it required miles and miles of garter stitch and grafting. But I persevered and conquered and all that, and I distinctly recall the relief with which I put all those assembled strips away in a basket to await the final assembly, requiring more miles and miles of garter stitch and grafting. At some point, I even got the first two strips put together, with three left to go. 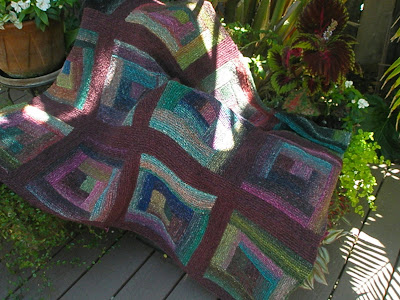 At this point I paused and assessed the yarn situation. After some thought and some calculating and a little bit of unwarranted optimism, I decided I just might have enough to finish the assembly and put on a border. Maybe.

With a renewed sense of purpose, I reached into the basket to pull out the fourth strip and found this: 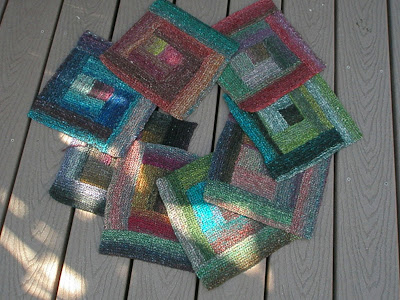 Those are not strips.

Those are individual squares.

This not only means I have to invest god-only-knows-how-many-more hours in assembling these b*&!^%$s into strips--it also means there is no-freakin'-way I have enough ancient, discontinued yarn to finish both the assembly and the border.

I think your past self must hate your future self 'cuz there's no way this was the knitting goddesses fault. Girl, you might just need some therapy. : )

We don't need no steenkin' border!

Good luck. And it's really pretty.

Ravelry to the rescue? Someone out there may just have a stash of that discontinued yarn...? Here's hoping!

Is there anyone in the world who could tell the difference if you used a different, non-discontinued Noro yarn for the grafting, etc? There are already a gazillion shades and tints and colors in the blanket -- so what if you add another couple-three? That is, if Ravelry and eBay fail you...

The knitting fates always win. If it's any consolation, the blanket is gorgeous. ~ksp

Sorry! It looks lovely so far, I am sure you'll figure out something!

Wasn't that Yuzen? I have 2 skeins left here, color #7. Let me know if you want them.

Pillows. You already have a big enough blanket [convince yourself.] Those extra squares are destined to become cute matching pillows. Lovely colors!

I take back what I said before. Past self probably thoughT there would be enough of the discontinued yarn left to do the final strip and was trying to convince future self to use an entirely different Noro to seam and border.

What yarn do you need? Its possible I could have it in my yarn store, I mean stash....

Gah! It is Noro, though. Maybe a similar colorway would work?