Before and After, Part 2

In yesterday's post, I mentioned I've been cleaning up my old sewing machines, plural. In addition to Frances (my great-grandmother's machine), and Eliza (my new treadle), I also have a 1928 Singer 127 "Sphinx". Before picture: 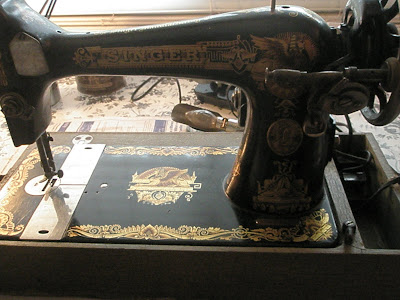 This is the machine I've had the longest. It came out of an old house my parents bought when I was a little girl. I was quite taken with it, so my mom gave it to me. I was nine. I still remember writing a letter to the Singer company asking if they could please send me a manual for it. The hand written letter that began, "My name is Suzy _____ and I am nine years old" must have moved some nice person there, because they xeroxed an old manual and mailed it back to me. I don't know what happened to that xerox copy, but I was able to download a pdf of the original manual from the Singer website last week--for free. I love the digital age.

I knew this machine worked because I remember using it as a child, but I haven't used it in decades. The belt was broken, the cord to the motor was crumbling, and the chrome was tarnished. I'd never oiled the machine, greased the motor, or cleaned any of it. 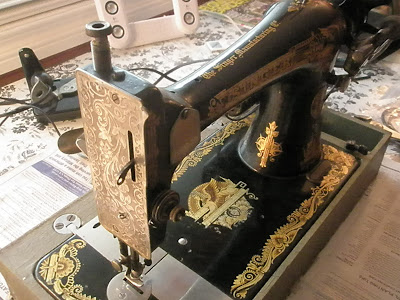 But I was able to find an original adjuster's manual online (also free--I do love the digital age) which helped me rehabilitate this old machine.

I loosened up all the working parts with WD-40, cleaned out all the old grease, and oiled the machine like crazy. I greased the motor, repaired the crumbling motor cord, and replaced the broken belt. Then I cleaned the exterior of the machine and polished all the chrome. 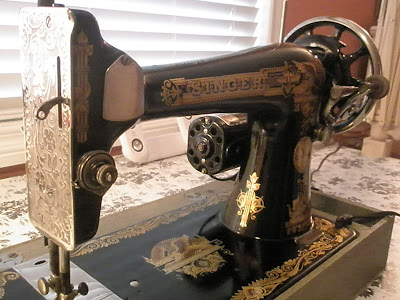 I love the shiny scrollwork on the face plate. 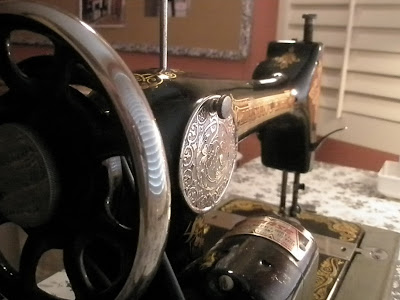 You can just see the motor in this picture. It's not a Singer motor, which leads me to believe this may have originally been a treadle machine that was later converted to electricity. There is also an after-market lamp that I removed prior to cleaning--further evidence, I think, that this was converted. 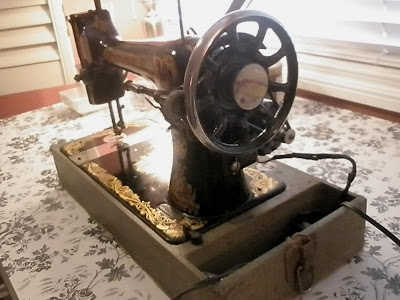 If I had the space, I might turn this into a treadle machine. But then again, I might not. It runs beautifully. It's quieter and smoother than either of my other machines, although I still have a small issue with the stitches that I need to work out. 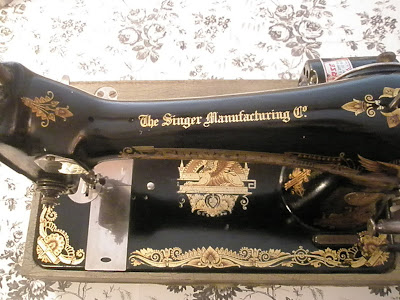 This is why it's called the "Sphinx": 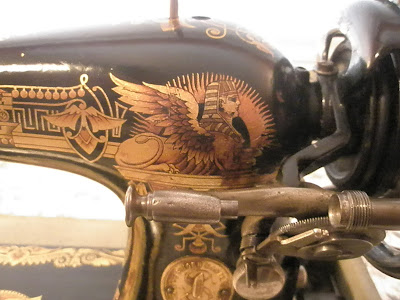 I've named this one Victoria, after my mother, who gave her to me so many years ago.

I suspect, however, that I may not get to use her too much... 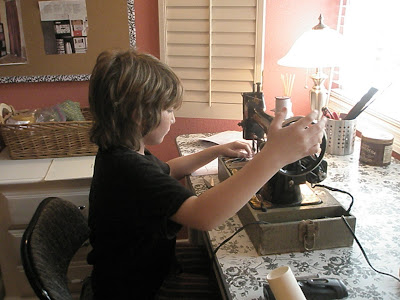 It appears someone else has laid claim to her. 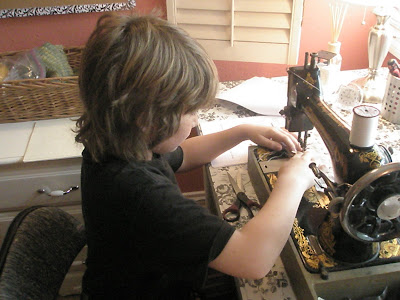 And he's pretty good, too. 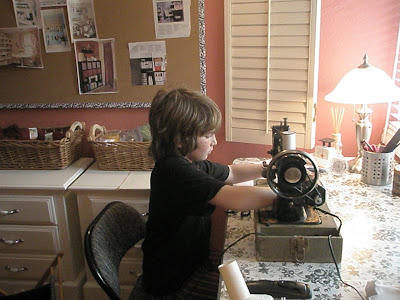 What a beautiful machine! I still drool whenever I see pics of your craft room :).

Beautiful! I admit that I am impressed at your ability to rehab your machine - I fear working on electronic things!

I love your old Singers, each one more beautiful than the last.

The torch is passed! The same thing happened to my first sewing machine last summer--my 11 yo boy glommed onto it, natural mechanic that he is. What's your son making?

I love, love, love that Sphinx picture. Egyptomania ran a good hundred years after Napoleon "discovered" Egypt. Sphinxes on everything!

Gorgeous! I have an old Singer too. I cannot remember what it looks like because it has been AGES (close to 20 years) since I last looked at it. It is in my living room safely tucked in its table. I should figure out how to open it. LOL

That is so gorgeous!

They are so pretty and you are quite the handy "man". Is it harder to use the old sewing machines than an electric one? Or easier do you think?

I've only ever used my elita machine I got for my 16th birthday.

You have such a great collection of old machines. And I love that your son has taken an interest in it! :)

good thing the craft room is big enough for two! :-)

Singer naaimachine...
It's nice to see such a beauty working :)

Wonderful that you restore these old machines. I have an old Singer that was rescued from a house about to be demolished. It is really in need of a cleaning. I started to clean it only to have the decals start to discolor and the gold was coming off. Needless to say, I stopped immediately and have just left it dirty. Don't know if it runs or not. What do you use to clean them so the colors stay? I would really appreciate any help you can give me.
Bonnie
browne426@hotmail.com

Man, they really don't make them like they used to, do they? These older Singers are so beautiful! Great job on all the restorations!