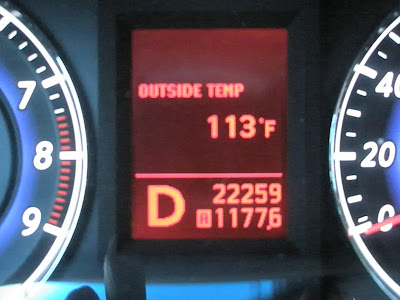 Happy Fall! Pfft. This is a picture of the dashboard thermometer on my way to pick up the middle school carpool. Please note that I live in San Diego, not flippin' Phoenix. There is just no call for this.

You will understand that modeled shots of a wool sweater were not in the cards. But Calluna, she is done! 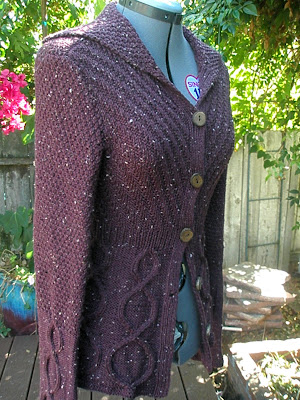 She's been done for a while, actually, but I haven't been motivated to try to get pictures. I decided, however, that the pile of unphotographed FO's was starting to get a little out of control. 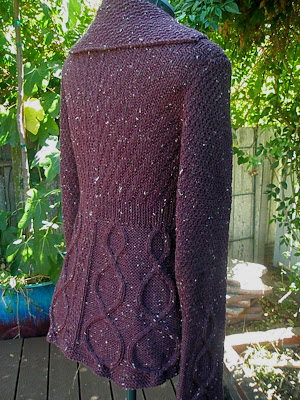 Bertha seems undisturbed by the heat. I suppose it wouldn't bother me, either, if I were lacking a head. 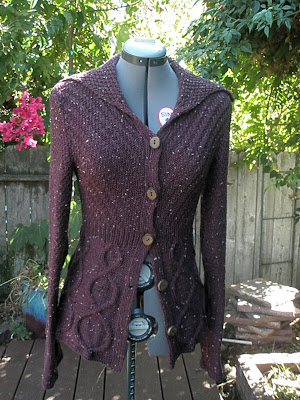 Modifications: I made a few mods to this one. In addition to my usual addition of length to the body (about 4"), I changed the waist detailing to 1x1 ribbing so that it would draw in a bit: 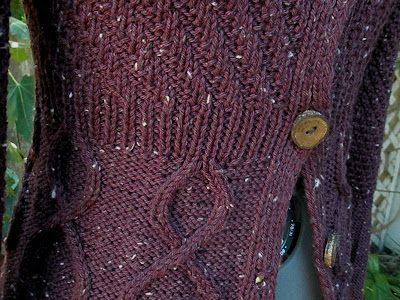 I made long sleeves instead of 3/4 sleeves, and I incorporated cables into the cuffs for a decorative, slightly bell-shaped sleeve: 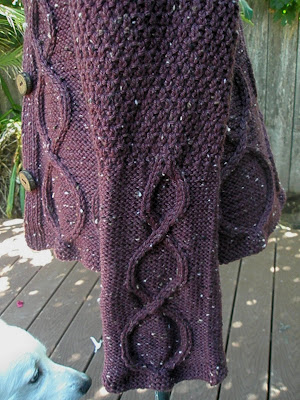 I added buttonholes and buttons the full length of the sweater, so that it can be worn a variety of different ways: 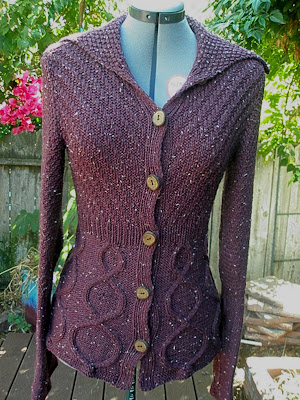 I also changed the placement of the buttonholes/buttons to make them closer together. 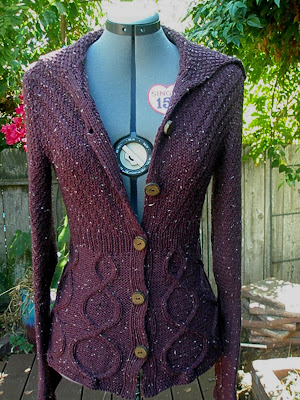 I did not run the buttonband up the collar, as the pattern calls for, and I left off the top buttonhole, which is placed on the collar itself. 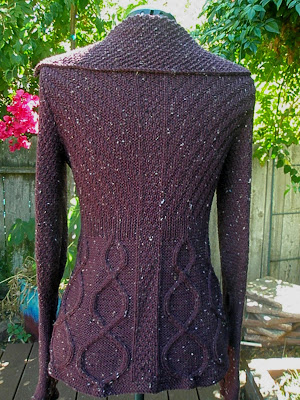 Other than that, I think I mostly followed the pattern. It seems to fit, although it was hard to tell in the three and a half seconds I was able to tolerate having it on. Boy, I miss winter.
Posted by Yarnhog at 3:05 PM

Another major winner from our favorite one woman Dog Rescue Team! I queued Calluna when I first saw yours a few weeks ago and have been obsessed with giving this pattern a try. Please tell me the stitch pattern on the upper body isn't a total drag, k?

It's gorgeous, as always!

Maybe once the weather is cooler, you can take a modeled pic? I always love looking at your FO pics. :-)

beautiful! so beautiful. love the details and the yarn.

Gorgeous! I have to say I like your version a lot better than the pattern pictures. Here's hoping some cold weather comes your way because you need to wear that sweater out somewhere.

Love the mods you made, your Calluna is gorgeous! Love the colour and changes you made to it. It's much nicer longer.

I can't wait for cold weather so you can wear it!

re "pile of unphotographed FO's"...that must mean there's more to come. Goody!

That is a beautiful sweater! I can see why you don't want to model it right now, though.

I had a dress made when we were in Vietnam this summer; it was so hot I could barely stand to be in the dress for fittings. I finally tried it on at home, and there are some things I wish were different, but I didn't notice when I was being fitted because I was sweating like crazy and just wanted out!

that yarn is simply beautiful. I love it! I hope one day to make a sweater like that.

yay, knitting! i LOVE seeing your FOs. this is another lovely one. can't wait to see more!

Um, 113? I nearly melted when it reached into the 70s here this summer. I don't know how you stand it! I makes me panicky just imagining the oppressive feeling of the heat!

On another note...great job on the sweater!

Your Calluna is gorgeous, as all your sweaters! Beautiful colour too.

Calluna looks beautiful. There must be something going around because the last two days have been ridiculously humid here.... and it should be even cooler in Canada!

Yeah, that's brutal. It's 31° C in Calgary and I'm finding that warm. On the other hand when it's -30° C in Calgary, you will be cool & comfortable in mild San Diego and I will be looking like Michelin Man. Calluna is lovely and that colour is great!

I love that sweater, the pattern changes are a good choice. Great job and stay cool.

It was 55 degrees this morning, windy and damp. Autumn in Michigan is in full swing. My sweaters are pretty much glued to me at this point.

I would spontaneously combust in 113 degree weather.