Yesterday I had to take Sam to the vet. As I mentioned, he originally ended up in the shelter after being hit by a car. That incident fractured his pelvis in multiple places, and since he was scheduled to be euthanized (because he was injured, and therefore "unadoptable"), he wasn't treated until after the rescue group took him. By then, it was too late for surgery. He's healing pretty well, but he'll always limp. He's also had serious problems with his teeth. Several of them were broken, either from the accident or from trying to chew his way out of a cage, and some were rotting. For various reasons, they'd gone several weeks without treatment. Not pretty, and not very comfortable for him, either. So yesterday I took him to the vet to have his teeth taken care of.

Sophie was--to put it mildly--not. at. all. happy. According to my husband, she was very distressed when we left, roaming the house, looking for Sam, and lying by the door, whining. When I got home (without him), she kept nosing me and looking at the door, clearly telling me to "go get him." Once she realized he wasn't coming in, she flopped on the floor and moped pathetically.

Sam wasn't any happier. The moment I walked him through the door of the vet's office, he just shut down. Ears down, tail tucked under, not afraid, just...if I had to name it, I'd say he was hopeless. He turned away from me, and it was as clear as could be that he thought he was being left again.

It wasn't a happy day, for any of us. Sam had seven teeth removed (in addition to the one that fell out a few days ago). Fortunately, they were mostly small front teeth, which dogs use for ripping. I'm sure he would need them if he had to bring down wildebeasts, but kibble is a lot easier to catch and doesn't require much ripping, so he won't starve. He also got the rest of his teeth cleaned, and got some antibiotics to treat any infection. He's much better off now. But I was very relieved when I was able to pick him up. He seemed pretty relieved, too. He was still loopy from the anesthesia, but when the assistant brought him out from the back, he started wagging his tail happily and walked straight into my arms to put his head on my knee.

Everyone is extremely happy to have him home. And Sophie has made it very clear... 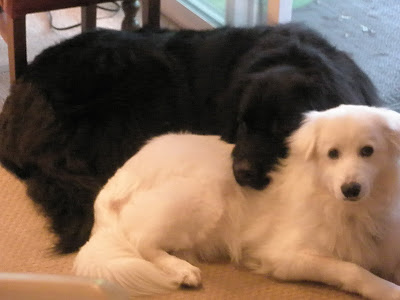 ...she's not letting him out of her sight again. 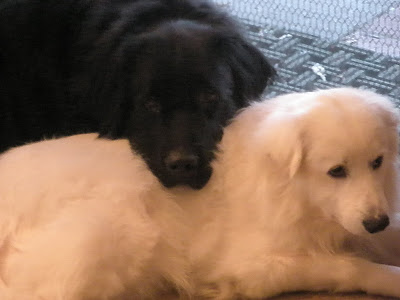 Sophie and Sam together is adorable.

Glad the Odd Couple is reunited!

Oh my, that actually brought tears to my eyes! I love that they've bonded so strongly already. The pictures say it all.

Kudos to you for taking such good care of him. The picture of Sophie with her head on Sam made me cry. May they have many years together.

I'm glad your new family member is home again safe. They are super cute together your doggies:)

Oh the love! Sophie & Sam are jsut too sweet for words. Dog feelings run very deep and very strong as your post illustrates.

OMG! That made me mist up! Ain't love grand?

That story is both heartbreaking and sweet! What a wonderful gift you've given him by taking him in and giving him love he so desperately needs. And Sophie's adoration is the sweetest thing ever. love(1,000,000)

They are so cute together. I bet they're glad the separation is over.

Oh man, that one choked me up. :) Sophie is a good sister.

well they got me all weepy.

Soooo, have you yet started referring to your family as a 2 dog household? Because according to Sophie and Sam, you are. :-)

your dogs are so adorable together. reminds me of my two girls I had, Zoe and Pauli. i guess this means Sam is staying, huh? so happy for all of you that you all found each other. makes me want to get a friend for Pepper.

Awww. Poor Sam (love his name, and you're right it's much better suited for him than O'Malley) ... He and Sophie are so cute together. :)

That's an awfully big puppy you've got there, Sophie.

Awww, these two are so adorable. By the way, who is your vet? In this area? PQ? Are you happy with him/her? Ours has increased his rates so much, it is a rip-off. Woof.

I'm really enjoying the "dog tails" because I can't have a dog, but love the idea of having one.

so precious, so very precious :-)

Your dogs are so beautiful. What a perfect pair! That last sweet picture...oh my goodness!