Last night after dinner, I cleaned the kitchen, walked the dog, got the kids headed toward bed, and settled in for a bit of knitting, movie watching, and chocolate. I was working the provisional cast on for Sahara, so I was a little distracted when my husband handed me a piece of chocolate and said, "Here, try this." But it was chocolate, so of course, I paused long enough to pop it into my mouth before going back to my counting.

About halfway through the cast on, I started scratching my chin. Not because of the cast on, although that would have been legitimate, but because it itched. And then my neck started to itch. And my face. When my back and chest started to itch a few seconds later, it got my attention. Not wanting to put down my knitting mid-cast on, I turned to my husband (scratching frantically at my head, which was starting to feel like a colony of ants had sprouted in my hair). "Do I have bites or something on my face?"

He looked up and examined my face and neck, then my back. "Nope," he said. "Hives. Bad ones. I think you're having an allergic reaction. And you'd better go take some Benadryl. Fast. Probably a food allergy. What did you eat?"

Pregnant pause as the horror slowly dawned on me. "Only the chocolate!"

Can it be? I've eaten pounds of chocolate in my life. Maybe tons. Candy, ice cream, brownies, cake, hot chocolate...I am an equal opportunity chocolate lover. And aside from the occasional stomach ache (and that fudge incident when I was a kid that I prefer not to recall), I've never had a reaction to it. But last night I did a pretty good impression of someone with a definite food allergy, and the only thing I had consumed in the previous two hours was a single piece of Hershey's Special Dark.

While the full import of this appalling turn of events sinks in, I'll show you this: 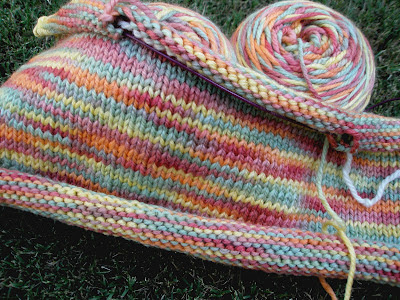 This is the beginning of Sahara, worked in the Lorna's Laces Shepherd Worsted I showed you yesterday. I'm getting perfect gauge and the fabric is a delightful texture. I'm liking the way the colors are blending together. I'm knitting with two balls, alternating every other row, to prevent any unattractive pooling. I'm a little concerned that the finished product won't look good in a variegated yarn--all the FO's I've seen are solid colored--but I'm going ahead with it anyway. What the heck--it's just yarn, right? If it's ugly, there's always the frog pond.
Posted by Yarnhog at 5:22 PM

No! Surely it was a faulty piece of chocolate! A bad batch. Benedryl is your friend.

Your project looks just beautiful, I love that yarn!

Total bummer about the chocolate. I hope Tammy is right about it being just that one piece and not all chocolate making you allergic (shudder).

Oh no... chocolate would be the most horrible thing to be allergic to. I hope it was a fluke accident

Might have just been something in that particular bar. Or maybe it was the yarn? Did you use a new skein you hadn't really touched before?

I'm with Tammy. Surely it was a bad batch, a contaminated bite, a - a - well, words fail me, but it just can't be a real, true allergy to chocolate. It's unthinkable. How can any reasonable woman be expected to cope with life without chocolate? Here's hoping it's a complete fluke, and chocolate is still your friend.

There's a lot more in special dark than special and dark. The only way to know for sure is allergy testing. And then you can avoid whatever-it-is. It may not be chocolate.

Also, keep benedryl in your purse. And get an epipen (allergist will probably give you a prescription for one). Allergies are nothing to mess with.

Read the ingredients for that particular chocolate. There might be something in there they've just added. I doubt its chocolate altogether, its probably one rogue ingredient that's being cruel to you.

Also, was it really hot by you yesterday? With no A/C? I get nasty hives when the humidity and heat spikes like it is here in MI right now. Just another thought.

Wow, I LOVE those colors together! What beads are you going to use? Pick up one color or vary the color of the beads too? Very fun sweater.

I read a book once about a woman who declared herself allergic to sugar, lost a ton of weight, started a sugarfree candy empire, met the man of her dreams, and lived happily, thinly ever after. But you definitely don't need to lose weight, so that does not need to be your story line - I agree with Melissa that you should get tested, so you know just which chocolates to avoid and which to savor.
Feel better :)

Nooooooooo! Not a chocolate allergy! What will you do?
Maybe its just an allergy to the "cheap" chocolate and your body is saying it wants the "expensive" high quality chocolate:)

Love the yarn. The chocolate could be a coincidence or it might just be something in this particular brand.
Most 'chocolate' ought not be called such because it has all sorts crap in it. If it has veg fat, for ex, it isn't chocolate.

Ooooh, I just love how that yarn is knitting up. I've been checking it out on Ebay, you enabler you! Yet to buy though...

Good luck with the chocolate. I'm with the 'go get tested' lady. Allergies are nothing to mess with. We will hope, with bated breath, that it was a fluke.

I hope you didn't suddenly develope an allergy against chocolate. Maybe it's just the special dark. I couldn't imagine a live without my sweety :)

OMG!!!! Chocolate????? How can that be???? No one, I mean NO ONE should be allergic to the goodness of chocolate. I hope it was just a bad piece.

Hopefully it's the chocolate and not the yarn!

Maybe it's just dark chocolate you're allergic too?

Oh no! I hope it was a one off. Maybe you got stung by something or some other coincidence.

No way! It must have been something added to the chocolate that had you hived out. Loving that purty Sahara.

First of all, Hershey's ain't that great. You might want to experiment with other, better quality stuff. I do love Lorna's Laces worsted! I haven't been able to find it around here anymore.

It's not necessarily the chocolate...Hershey's puts all sorts of stuff in their chocolate. My younger son can't eat Hershey's, but he can eat other dark chocolates (allergic to dairy).

Oh it can be. I ate hazelnut bread with peanut butter and hazelnut coffee for years before becoming seriously allergic. Sorry for the bad news.

Did the Benadryl help? definitely get tested and get an epipen, don't mess around with bad allergic reactions.