Guess who's going to see the Harlot in L.A.? That would be me! Kathleen from Quail Hill Knits scored reservations for the two of us (750 spaces--all gone in minutes!), and we're going to meet--for the first time--for a day devoted to knitting. I'm unreasonably excited, not just because of the Harlot (although I'm embarrassed by my fondness for this woman I've never met), but also because I love Kathleen's blog and I'm really looking forward to meeting one of my imaginary friends in person.

Also, I've finally got my Ravelry page somewhat functional. At least I have some of my projects up and my profile filled out--although Ravelry refuses to recognize my blog and won't link here. I haven't figured out all of the functions, and I probably never will, because I'm just not that tech-savvy or interested. But so far, it's pretty cool. If you're already on Ravelry, you can check me out at YarnhogSV--because, believe it or not, there is another "Yarnhog", and she got there first. I'd be annoyed, but I've been emailing her, and she seems very nice. (Also, she's been Yarnhog longer than I have, so to be fair, I suppose she has a greater claim. Hmmph.)

And the Knitting Goddess has smiled upon me. 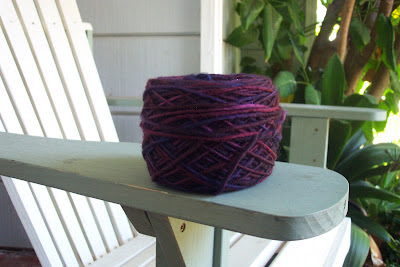 I found another skein of purple Malabrigo in the stash. I don't know why it was hanging out with the leftover alpaca--that stuff is a bad influence. I know it is, because every time I hang out with it, I end up spending money on--what else?--more alpaca. There is a pretty good chance I now have enough of the Malabrigo to finish Vino for real. I know you are all rejoicing with me.

Oh, and one more thing: Golden Retriever singles from my beloved Molly. It was harder to spin her fur than it is to spin Sophie's fur or wool, I think because Molly's undercoat is soft and fluffy, but relatively short. I found that I had to spin it thicker than I would have liked, because when I tried to spin finer singles, the yarn just disappeared into little wisps of fluff. I think I'm going to try knitting this up as singles. I'm hoping it's strong enough to hold together. If not, well, I'll just try again. One great thing about spinning dog hair is, there's never a shortage of raw material!
Posted by Yarnhog at 11:05 PM

Will you and Kathleen pretend that an imaginary Sophanne is with you? It would make me much less jealous. I wonder if blog friends is reason enough to haul up and move to the west coast. Hooray for the hidden yarn.

You guys are lucky lucky dawgs!! Best to take LOTS of pics and get an upclose and personal interview for us sad ones waiting here in blogland. Pretty pleeeese.

Oh, and the nice compliment you left for my husband went stright to his head. He is unbearable now. I'm might have to divorce him.

Hey good score. I'm sure you both will have a wonderful time. I've always had schedule conflicts the few times she has been around here.

Glad you found another skein of Malabrigo!

It's been interesting to see the dog hair you have been spinning up. Very neat!

I'm hoping we'll make it... I'm near the top of the waiting list. They were very nice and took my number saying they'll call if spots open. I'm sure we'll at least make the trip down there in hopes of no-shows so hopefully we can meet up outside at least!

Have a great time!! Love that Malabrigo, it's lovely.

Happyhappyhappy stash surprise! That vine will be so pretty -- it is already

love reading about and seeing your dog hair spinning adventures. When you turn pro, can I send you a big bag of Bear fur to spin? It is wonderfully soft, and I know my husband would love to have something knit from it to remember her by when she leaves us for the Great Napping Place in the Sky.

See you on Ravelry!

Yarn Harlot is really funny. She was up here in Anchorage a few months ago. She couldn't believe all our daylight! Have fun!

You'll love Harlot! She's amazing and to be in a room filled with nearly a thousand like minded folks will just blow you away! The dog hair spinning makes me smile.

You guys will have a great time! I enjoy both your blogs. Take lotsa pics! My cellphone died when I went to see Harlot and now I have no stinkin' proof that I really saw her. She's the real deal though, and once she starts talking, it's like all these people who have never met immediately understand one another. Phenomenal.

Lucky You! Have fun. Glad you found another skein of Malibrigo, is it not the best stuff? Your sweater coat looks lovely.

You will fall under the spell of Ravelry, it's cool in so many ways!

Thank goodness your on amicable terms with the original Yarnhog. We all know what can happen over a name. You would have to change to YarnSwine, or YarnOink or something equally as unpoetic. Although YarnsWine is growing on me at the moment.

Glad to see that Vino is saved. I am hoping you may even wear this one so I am really rooting for it :–)

I'm so terribly jealous that you get to see here, although I went to the Portland signing. Mostly, it would've been nice to have a pal(Sharon, where were you!). She's in Seattle next week, but I have to work. Yay for blog pals!