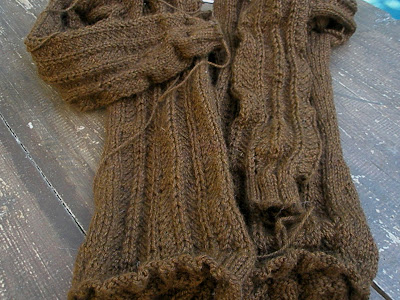 My second Ariann is coming along swimmingly. The body and sleeves are done and attached and I'm working my way up the yoke. Alas, I am not in love with the yarn. I used some Berocco Vintage Wool I had in the stash, which is a wool/acrylic blend. I bought it from a Rav destash, even though I'm not an acrylic fan, because the color was lovely, it was super cheap, and the reviews were quite good. Unfortunately, I do not agree with the majority of the reviewers. It feels like acrylic to me, and not in a good way. It's got that plastic-y feel and it's unpleasantly splitty. I think it will still make a nice finished sweater, but I'm not loving the knitting of it.

As a result, I've been craving a nice, wooly yarn. Yes, I have many in the stash, but that didn't stop me from fantasizing about this yarn. I've wanted to try Marr Haven for a couple of years, but I've never bought any. Knitting with the Vintage Wool pushed me over the edge. I decided I the Marr Haven would be perfect for Snowbird, which has been in my queue for a while--and I already own the pattern. It calls for a yarn with a gauge of 20 stitches and 28 rows to four inches. Marr Haven comes in worsted and sport weights, but after spending some time perusing Rav, it appeared to me that the worsted weight was probably more like a bulky, and that the sport weight was likely more like a light worsted. I decided I'd go out on a limb and ordered a cone of the sport weight, which supposedly has 1750 yards. 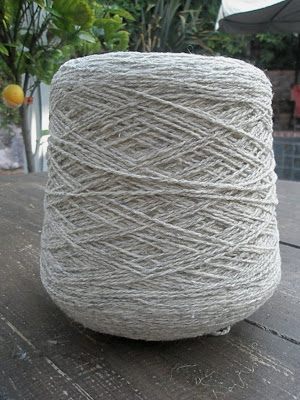 The cone showed up this morning, and it is as lovely as I had hoped. It is a soft, woolly yarn, with that sweet, sheepy smell and noticeable lanolin. It reminds me very much of Beaverslide 100% merino, which I have used in a bulky weight. This is a zero-itch-factor wool, which makes it perfect for me. I got the light grey shade, which is really a light, heathered beige. The photo is pretty accurate. 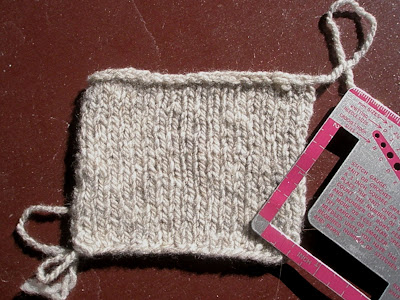 Of course, I had to swatch it right away. I used a size six needle, and got an unwashed gauge of 20 stitches by 28 rows, exactly as the pattern calls for. I washed my swatch with warm water and a bit of dishsoap and patted it out. The gauge is unchanged, but the swatch fluffed up and the stitches filled in nicely. The end result is soft, blurry, and perfect. I can't imagine trying to knit this yarn to a sport gauge--to me, it's a perfect worsted weight.

Just goes to show: playing with yarn is a good thing!
Posted by Yarnhog at 9:42 AM

Yes, playing with yarn is a WONDERFUL thing, but remember this: gauge swatches lie. (My latest one did, anyway.) Be that as it may, that looks like yummy yarn.