At Ruth's urging, I signed up to participate in the 2010 WIP Cup on Ravelry. It's like the Ravelympics or the Tour de Fleece, only arranged to coordinate with the World Cup. The idea is, naturally, that you sign up to complete one or more WIPs during the World Cup, and if you do, you win! I don't care about soccer (or football, if you prefer), but I do care about knitting and I need some extra incentive to finish up my Spicy Tweed before the summer really gets into full swing around here.

In accordance with the rules, I put down the needles on this project a couple of weeks ago (actually, I was supposed to have done so a month ago but I didn't know). The WIP Cup officially started yesterday. Since I had only the back done, today I cast on for the fronts. 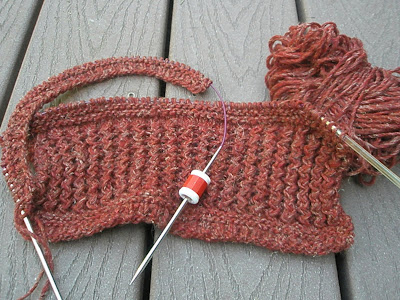 I am trying something new to me and working the fronts more or less simultaneously, a section on one then a section on the other, to try to keep from running out of steam when I finish one and have to start over on the next. If it works out, I'm going to do the same with the sleeves.

The WIP Cup ends on July 11, so ideally I will have a completed sweater by then. Which I won't be able to wear until next winter, but that's not the point, right? Anyone else in?
Posted by Yarnhog at 3:50 PM

Oooh! I like this! When Bloggiesta is over (tmorrow/Monday), this might be next. LOVE this idea, Suzanne! Good luck!

Good Luck!! I am hopeless with my WIPs!

I love doing both sleeves/fronts/front-and-back at the same time. Even if it's just to the point where I have to put something on waste yarn to do different shaping.

Also, I've discovered I hate waste yarn. The stitches shrink and are such a pain to get back on the needles. Now I use extra cables from my Knitpicks set and those end cap thingies. That way, I just put the needles back on when it's time and off I go!