The trouble with a new hobby is the snowball effect.

In researching and seeking parts for Frances, I learned a lot more than I ever intended to about sewing machines. Among other things, I learned that parts for a Singer machine are cheap and easy to find almost everywhere, no matter how old the machine, whereas parts for Frances, whose maker, National Sewing Machines, went out of business more than half a century ago, are...not.

I also learned that many of the old machines could be purchased with either a hand crank, or a treadle, or an electric motor, depending on the consumer's preference. (Lots of people at the time still didn't have access to electricity. Some treadle and hand crank machines were even delivered with a boxed electric motor, to be converted once electrical lines made their way out to the consumer. Fascinating.)

And I learned that there are still lots of people today who use the old treadle or hand crank machines--or people-powered machines, as they are often called. This caught my interest in a big way. My primary objection to sewing machines has always been the noise and the speed and the whole industrial sort of nature of the things. But a treadle machine...hmmm. That's almost like a spinning wheel, isn't it?

On a lark, I took a little look on eBay to see what the things run. There are quite a few available, often for $200-$400--plus $150 in shipping. This is more than I'm willing to spend on a lark. But it just so happened (doesn't it always?) that there was an auction ending in 20 minutes for a lovely-looking treadle machine for pick up only, about an hour's drive from me.

You can see where this is going, I presume. Straight back to the title of the post. This is my new baby: 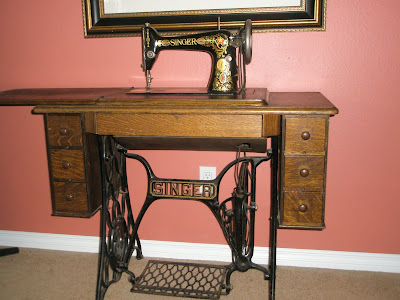 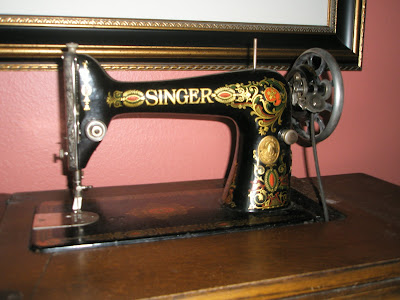 You can see that her pretty decals are mostly intact. She has about half of the original attachments. She does need a new treadle belt, and her oak cabinet has a bit of water damage and some paint splatters: 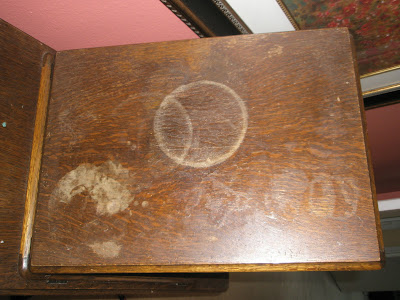 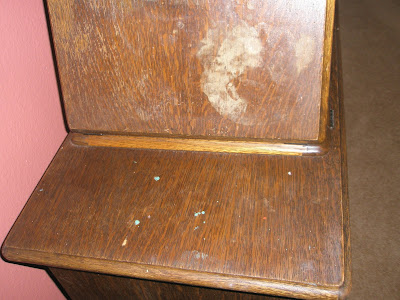 She needs a bit of cleaning and oiling, but her mechanism seems to work properly. She uses modern bobbins and needles (yay!), and original and reproduction parts are widely available, meaning I don't have to worry about breaking or losing pieces as I do with Frances.

As you can see, she has already taken up residence in my new craft room. I am in the process of cleaning and repairing her and I can't wait to try her out! Oh, and the best part? She cost me exactly $81. Probably more than her original owner paid, but a smokin' deal, nonetheless!
Posted by Yarnhog at 4:53 PM

Wow! What a fantastic find!

Awesome! I gasped in amazement and pleasure when I saw the first photo. She is a beauty, no doubt about it, and I would venture to guess worth far more than $81. I have my (grand)mother's treadle Singer in a cabinet that looks remarkably similar to that, except that there is a matching box-like cover to go over the machine instead of it dropping under the desk. When the lights go out, you and I will be ready!

Yupp, kinda looks like my grandma's. She's a beauty! (Your new baby, not my grandma. Although she, too, is still pretty good looking.)

Nice! I was going to suggest craigslist, but it looks like you found a winner!

Love it! I have my grandmother's old singer (similar water damage...apparently grandpap used it as a plant stand at one point) and also had to replace the treadle belt. We were in PA at the time, so was able to get a leather strap from an Amish tanner for $1 :) Don't know if you have any saddle shops local, but might be worth a look...

Lovely - it's in such great shape! I love the way that the old machines had so much thought put into how they look... now even expensive machines are just white blocks! My Dad has a similar model, but I've never thought about trying to fix it up.

It's a beauty! I have a similar one that once belonged to my great aunt. I remember visiting her as a teen and using it to repair her clothes when her eyes got too bad to see. It's surprisingly easy to use. Have fun!

What a lovely machine. The older machines give such a feel of substance and hand turned engineering. May your relationship be long and fruitful.

Awwwww and what's the baby's name?

What a beauty! I have one very similar, but the cabinet is not quite as big, and it's not so decorated. Bought it at a junk store, but it hasn't been used...maybe I'll have to give it a try...

Beautiful!!! it looks just like the one my babysitter used all the time when I was a child. I loved the gentle hum it made as she sewed. Thanks for bringing me a lovely memory.

I'm glad to see you don't do anything halfway! love to see all your creative adventures!

Congrats! She is lovely.

Beautiful! I've always regretted not buying the one I saw at a fundraiser auction in the '80's. It went for $65. I didn't sew much back then, sew even less now, but what a pretty thing that was.

Old English works great for touching up marks such as your cabinet has. Brown shoe polish works well too. Love your machine!