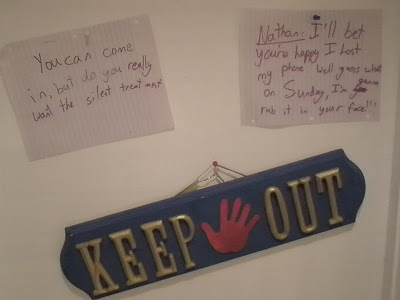 The Middle School Maniac is not pleased.

As part of the last round of "What the &*%! is up with your grades?", my husband and I concluded that the cell phone Older Son got for Christmas (that he would have just died without because absolutely everyone else has one and he feels so diminished by being the only kid without one) is an integral part of his current focus problems. He's so distracted by talking to his friends and texting and what new games he can get and how to play music on his phone that everything else is secondary. I know I'm not the first parent to discover this, and I'm sure I won't be the last to decide to restrict cell phone usage only to the weekend. But, boy howdy, my kid thinks I'm the meanest mom ever. I think that means I'm doing something right. At least I'm not alone in the the doghouse; my husband took the phone away for the weekend, too, in response to an act of defiance and disrespect. I suggested to Older Son that he might be able to get some lenience if he apologized sincerely. He responded that he had nothing to apologize for, and to prove it, he spent the evening digging through the law books in our office, searching for proof that "kids have the same civil rights as adults" and that he is "entitled to a fair trial." Poor kid; with two lawyers for parents, he doesn't stand a chance.

On a side note, has anyone else seen the show "The Strictest Parents in the World"? I think it's new; we watched it out of curiosity over the weekend, wondering what strict parents look like. The premise of the show is that indulgent parents who can't control their defiant teenagers send them to live with strict parents for a week. About halfway through the show, my husband turned to me with a look of dawning horror and exclaimed, "Are we the strict parents?!" Huh. Who knew?

And because this is still a knitting blog...or (ahem) at least a fiber-y blog, here's the update on the GGGSS: 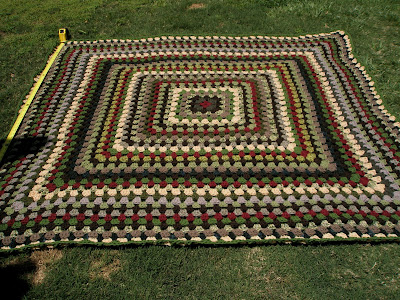 I'm still loving working on it, despite the unwieldiness of such a huge single piece. The constant color changes remain endlessly entertaining (I'm simple that way). And I think the mindless repetition of double crochet is about all I can handle at the moment.

The end is not yet in sight, but we are slowly closing in on the goal of seven feet square: 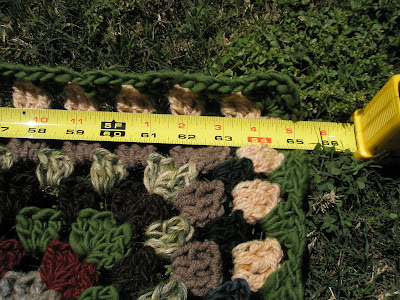 Your son will thank you when he gets older and has kids of his own (or sees his friends with kids...)!!! Here they say that hte kids with strict parents are the lucky ones. Hang in there- youæll get through it!

Oh, and that blanket of yours? Gorgeous!!!

Here's a phrase we used for our now 30 something daughter. Whenever she said "but all the other kids' parents let them do it," we replied as follows:

I feel so sorry for them. Obviously their parents don't love them as much as we love you.

She grew to hate the response so much that she stopped using the "other kids' parents" line altogether.

BTW, it isn't a crime to be the strict parents and it may prevent the commission of crimes by your offspring.

So there, Older Son.

Holy cow woman, that is one huge granny square! It looks great!

You're no where near the meanest mom in the world. When I look at the way some kids are these days (man that makes me sound like an old hag), all I can think is that my mom wouldn't have tolerated that. So I guess you could say she was strict too - and I appreciate the ethics it drilled into my head. So keep going.

This is going to be funny later. You Absolutely HAVE to snag those signs on the door to save for big laughs later in life.

Not that you need me saying so, but your a good mom and my impression after having one course in "school law" is that kids have about zero rights and are lucky the adults are indeed so indulging!

..or else you can save them as collectibles when he's famous. Do you think he might sign them?

Sounds like you guys are doing everything right. Isn't that nice to hear for a change? :-) Our three teens don't have cell phones either, and so far they've survived just fine. Once oldest son has his driver's license, we will probably get a limited-use phone for him to have "on the road". But no texting, etc. - just emergency calls to Mom and Dad. See, we're mean too!

Those who said that only the most loving and caring parents set boundaries and limits, and enforce them when needed, are right. Nobody said it would be easy, though!

He's got nothing on you. He'll have to find that out some day. Maybe when he has kids on his own? Until then you are the law. :P I'm dreading my older one going to 7th grade next year and I'll have to go through that drama too. Thanks for preparing me.

I think that's hilarious that he thinks he's going to get you by going through your law books. I bet you had to try really hard to suppress your joy of that action, almost as much if he had picked up a pair of knitting needles!

Oooo, Sandy's response is a good one. I like it. Mine was (when I finally thought of it late in the game): "It's in my job description."

Good for you: be tough, draw a firm line. (It's also part of your "job description" to give him stuff to complain to his friends about!)

So much to look forward to in the world of parenting huh? :)

Of course you are strict. If you weren't, the kids would be in control. Just think about THAT scenario for a minute.

Strict is good as long as there are spaces in the strictness -- areas where the kid can let it all out. I am sure you have those, too.

I am pondering a giant granny square myself as a way to use up a grunch of Knit Picks worsted. Crochet eats up the yarn faster than knitting, right?

1. You are RIGHT ON! Do not back down or minimize because you ARE doing exactly the right thing (and your conclusion about the phone being the problem? RIGHT ON!) i finally learned some parenting skills when my Youngest was 14 - there's a word I used very successfully to reply to the "You make my life miserable!": BUMMER! (I managed to not point out that leaving off the last word would have been entirely accurate.)

Thanks for commenting on my Ashling Tote pattern!

Love your blanket. Some day I'll make something like it.

And yup, you must be doing something right as a parent. We've got to stand our ground on issues and believe that it'll pay off in the end. You're doing a great job!!!!

Trust your instincts. When my kids were little they thought we were SO MEAN and UNREASONABLE. Now they're in their 20s, and they'll say that they think we're wonderful and raised them well! Maturity finally does kick in!

I ma not a parent. If I were, I am quite sure I would keep my child locked up till they are 25 and then only let them out with a chaperone. I don't sleep when I have puppies, a poor baby would never get any sleep as I would be forever poking it to make it was still breathing. I'd be very strict. In short, I'd be a terrible parent. Thankfully my family line ended with me and two gay bothers, no sisters.

I have to say that I am impressed with the fact that he actually tried to research the fact that he had rights. I don't know that most of my students would have had the motivation to try to find proof to back up their claims. At least he has that going for him! (If only he would apply himself to his school work as well, right?!)